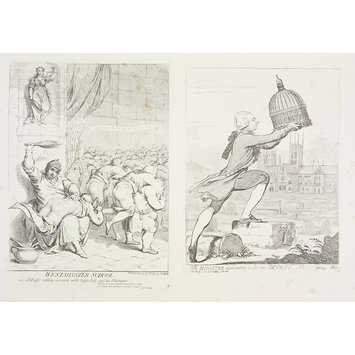 Two plates from an album containing 45 numbered prints on wove paper, the majority printed two per page, recto only. Numbered 9 and 10 respectively, number 9 depicts the Whig politician Charles James Fox, whipping William Pitt and his supporters with a birch rod in a large hall with stone walls. There is a statue of Justice in an alcove above Fox's head. She too is holding a birch rod along with her scales, evenly balanced. Pitt is bent over Fox's knee with his bare buttocks scarred. He is apologising to Fox and promising reform which Fox rebuffs as 'Twaddle'. In the background is a sea of other chastised figures who face the wall, collectively uttering 'Pray forgive us this once and we will do so no more!'
Lettered with title, captions, and the original publisher's name, date, and address.

The second print on the same page is entitled The Minister Eendeavouring to Eke Out Dr. Pr*ty***n's Bisho-Prick' and depicts Pitt holding the dome of St. Paul's aloft, poised to place it over the central tower of Lincoln Cathedral. He is standing in a graveyard some distance in front of the cathedral with his foot resting on a small tomb lettered 'Hic jacet' (Here lies). The tomb is also decorated with a winged skull and crossbones and a bishop's mitre. Pitt is satirised here for his allegiance with Dr. George Pretyman (1750-1827), afterwards Tomline, his tutor at Cambridge, personal friend and private secretary.
Lettered with captions,title, and original publisher's name and address.

Pitt's friendship with Dr. Pretyman led to a great deal of satirical lampooning. See the BM's 'Catalogue of Political and Personal Satires', no. 6940: Asylum for Fugitive Pieces, ii, 1786, pp.290, 301 ff. Bishop Thomas Thurlow was translated to Durham Cathedral as Pretyman took over at Lincoln. Thurlow had previously been Dean of St. Paul's and the Master of the Temple. See also Nos. 7147 and 7149 from Vol. VI (1784-1792) of the British Museum catalogue. 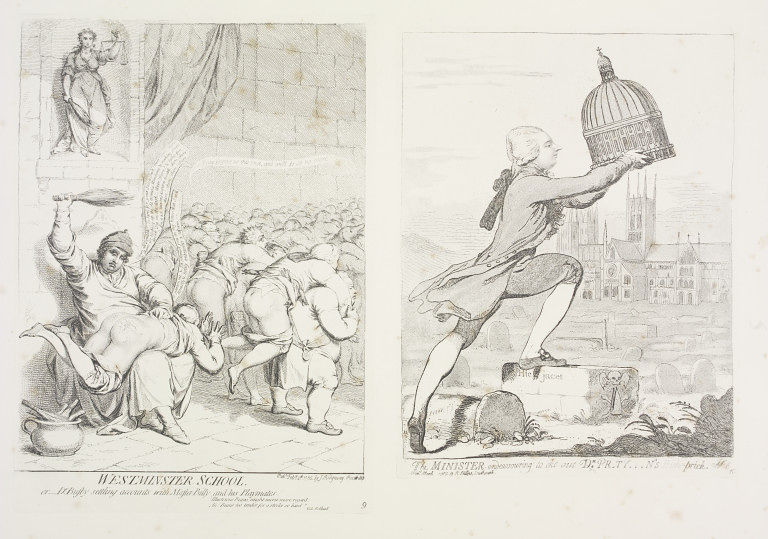