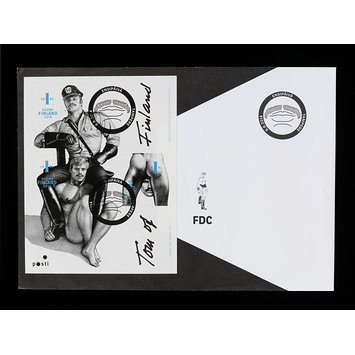 This is a first day cover set of stamps, issued by the Finnish postal service, Itella Posti Oy on 8 September 2014. They feature the illustrations of the mid-twentieth century homoerotic artist Tom of Finland. The set consists of a stamp sheet attached to a specially designed envelope and three postcards featuring different illustrations. Accompanying the first day cover set is an envelope with postmarked Tom of Finland stamps, sent by the Finnish public broadcasting service to an address in Russia.

This stamp set and postmarked envelope have been acquired as part of the Design, Architecture and Digital department’s Rapid Response Collecting project. Stamps are commonly printed by national postal services with images celebrating their country’s achievements and representing them internationally. In April 2014 the Finnish postal service announced that they would be doing this through the illustrations of Tom of Finland. Tom of Finland’s hyper-masculine men are globally recognised as icons of gay and popular culture, and as such, he is one of Finland’s most well-known artists. By the time of their release, on 8 September 2014, the stamps had been pre-ordered in 178 countries worldwide.

Born Touko Laaksonen, Tom of Finland’s artworks first appeared in 1950s American beefcake magazine Physique Pictorial, a fitness title clandestinely aimed at gay men. In 1962 the US Supreme Court ruled that nude male photographs were not obscene, which led to a relaxation in censorship codes restricting the depiction of homosexual acts. By the 1970s Tom of Finland was able to publish more overtly homoerotic work, with his drawings entering more mainstream gay culture. His work began to enter the mainstream art world, with exhibitions and a publication in the 1980s by Taschen. His work has become among the most recognisable examples of erotic art in popular culture.

When used for their intended purpose, these stamps openly disseminate homosexual imagery. While this type of representation was once seen only clandestinely, these stamps reflect the majority of Europe’s changing attitudes towards sexuality in the twenty-first century and aspirations to spread these ideals globally. There are still 79 countries around the world where being gay is illegal, with at least five punishing same-sex relationships with the death penalty.1The publication of the set of stamps was not without controversy. In Finland, an online petition called for their cancellation, insisting that “traditionally stamps have shown themes that are aesthetically beautiful and culturally valuable. Strong homoerotic themes in stamps are not either”.2 The chain department store Halpa-Halli, which consists of 39 stores across Finland, managed by Christian owners, refused to stock them.

Finland has historically had close diplomatic and economic ties with Russia. While these have fluctuated throughout the twentieth and twenty-first centuries, the benefits of good relations between the two countries remain significant. Nevertheless, the general progressiveness of Finnish society often conflicts with the conservative Russian Federal Assembly. For instance, from 11 June 2013 Russia’s ‘anti-gay propaganda’ law made it illegal in the country to equate straight and gay relationships and to distribute material on gay rights. Finland has recognised same sex registered partnerships since 2002 and on 28 November 2014 the Finnish Parliament voted to permit same sex manage, which came into effect on 20 February 2015.

In light of this, reporters from the Finnish public service broadcaster Yle sent two parcels and two letters to correspondents in Moscow and St Petersburg to see what, if any, reaction they would get. Posted on 9th September 2014, the Yle reported that the letters were delivered without any opposition. Nevertheless on 20th October, the St Petersburg politician Vitaly Milonov called for the stamps to be banned, and asked for Russia’s postal service to refuse all letters featuring the Tom of Finland stamps and for Finns to not send post using them. Milonov was one of the co-authors of the St Petersburg’s ban on ‘gay propaganda’ in 2012 that contributed to the introduction of the national ban.

The V&A holds in its Textiles and Fashion collections a vest with a counterfeit Tom of Finland illustration, but until this acquisition his illustrations were only featured in publications in the National Art Library. These stamps make a significant addition to objects of LGBTQ culture in the collection.

Itella Posti Oy (made and retailed by)

The stamps were issued by the Finnish postal service on September 8 2014. Department store Halpa-Halli refused to stock them, and an online petition called for their cancellation, insisting that “traditionally stamps have shown themes that are aesthetically beautiful and culturally valuable. Strong homoerotic themes in stamps are not either”. 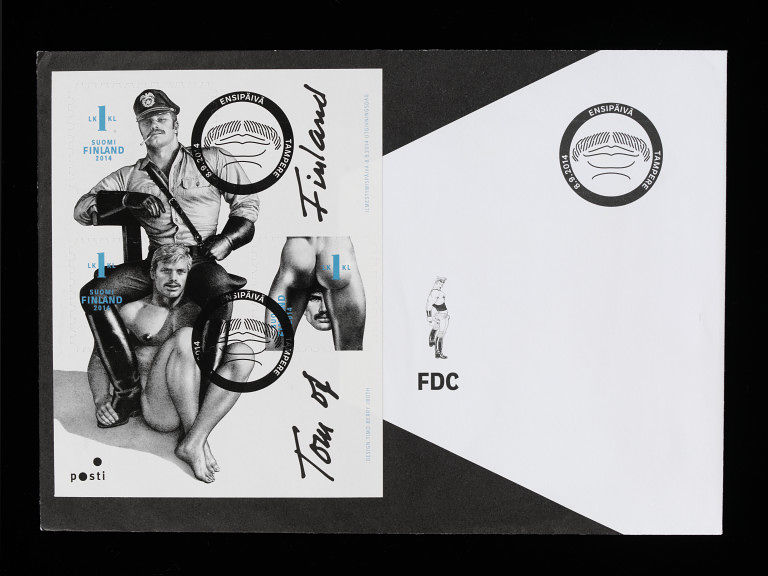