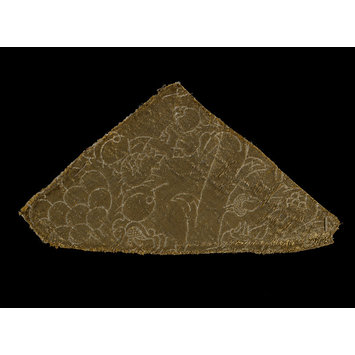 This fragment represents the most expensive type of textiles made in Renaissance Europe. The term used to describe them, ‘cloth of gold’, emphasises the fact that they are woven of yarns made of precious metal (usually beaten gold or silver wound round a silk thread) and silk. Weaving with metal thread was a very skilled process, requiring weavers who had undertaken a long apprenticeship before gaining status as masters and setting up their own workshops. Such rich silks would have been woven to commission for individual clients as they were so costly. Wearing a silk like this was a sign of extreme wealth, as the metal was 'real' currency.

The main centres of silk weaving in 14th- and 15th-century Europe were in Italian cities — Venice, Milan, Lucca, Florence, Genoa, Bologna — although some centres in eastern and southern Spain attempted to compete. These centres supplied domestic markets and clients in northern Europe.

Triangular fragment of cloth-of-gold. The cream silk base fabric is almost entirely concealed by a floating gold thread weft. The design on the fabric is traced out with lines of cream thread, which serve to hold down the floating gold thread weft as well as picking out a design of pomegranates, trailing vines, acorns and fruit.The raw edges of the fabric show vivid yellow silk threads, around which the gold has been wrapped.

This was part of a collection of 640 objects received by the Museum on 5/6/1900, mainly textile objects, but including half a dozen ceramic tiles, leather furnishings and a Japanese screen. There is an inventory in Records (vol.168, p.240) of this group. Items 7 to 32 on the list were cardboard sheets with mounted specimens of velvets and brocades, 165 specimens in all. At least 90 of these fragments were acquisitioned by the Museum (1062-1900 and 1185 to 1274-1900). It is unclear what became of the remaining 75 fragments. A number of objects on the list were not acquired, and on 30/10/1900, were sent to Christies auction house for sale.

These objects formed part of the collection of Major W.J. Myers, who had in his will requested that the V&A be given first refusal of his collection of Arab glass and wall tiles then on loan to the Museum (purchased 1900-01). He also collected Eastern and Western textiles and dress, but is perhaps most famous as a collector of Egyptian decorative art. The Myers collection of Egyptian art is housed at the Brewhouse Museum in Eton (see http://www.etoncollege.com/eton.asp?di=275, accessed 20/12/2006) and has been deemed "one of the world's finest collections of ancient Egyptian decorative arts" by the Metropolitan Museum, New York. (http://www.metmuseum.org/special/EgyptianArtatEton/egyptian_more.asp, accessed 20/12/2006)

Cloth of gold was the most sumptuous fabric of the medieval period. Towards the end of the fifteenth century, the Italian weavers found a way to weave cloth-of-gold so that the metal thread was shown to maximum advantage upon the surface of the cloth. In the example, the reverse of the fabric has no visible gold at all, showing a plain-weave cream silk reverse. Prior to ca. 1430, gold cloths had had a continuous gold weft, much of which was concealed on the reverse. In the 1430s, weavers began to develop a way of eking out the precious metal thread by weaving plain silk (usually yellow) beneath the cloth-of-gold elements, enabling them to produce patterns with increasing expanses of gold. In extreme examples the fabric around the cloth of gold designs was reduced to a mere outline of velvet or woven silk, like the example here.

The layout of the pattern is loose, which allows the gold threads of the supplementary weft to float over the surface of the solid woven base fabric in solid expanses of gold. The threads are closely spaced and held down by binding warp threads, which, densely spaced, also form the narrow lines that trace the pattern. The effect therefore, is of solid gold fabric with a trailing pomegranate and vine design drawn upon the textile in cream.

The majority of Italian 14th century textiles fall into the category of "pomegranate patterns" – a term created in the nineteenth century. "Pomegranate patterns", first seen ca. 1420, became increasingly popular from 1450 onwards. 1339-1864 and 759-1875 show two other examples of 15th century pomegranate designs, one in velvet, one in silk damask. In this example, the pomegranates are shown as quite small, round fruits, with one splitting open to show the fertile seeds within. A larger "pomegranate" motif is truncated by the edges of the fragment, but looks more like a pinecone. These "pomegranate patterns", which tend to look more like thistles, lotus flowers, pinecones, or pineapples, dominate surviving textiles so completely that other motifs tend to be considered of secondary importance.

The style of the design, particularly the thorned vine, is very similar to that of the thorned vines woven into Henry VII's cope of Florentine riccio sopra riccio (cloth-of-gold velvet) with wine velvet. This is currently on display in the British Galleries, on loan from Stonyhurst College. 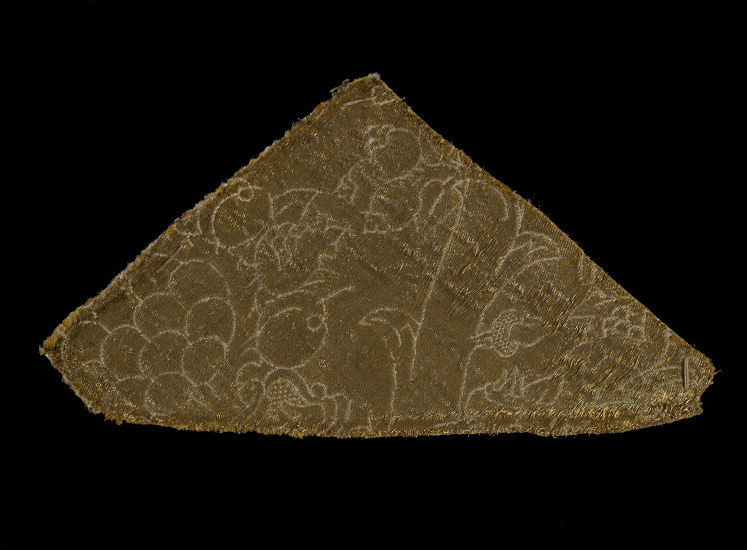