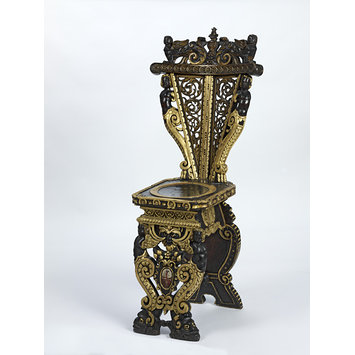 Italian chairs made from vase-shaped boards of wood have long been known as sgabelli, derived from the word scanno (Italian for 'stool'). They were often highly ornately carved, and would have been very uncomfortable to sit on without a thick cushion, held in position by a circular dished area carved into the seat. This sgabello formed part of a set that belonged to Jules Soulages (1803-1856), a lawyer from Toulouse. His collection was bought piecemeal by this museum, after being exhibited at Marlborough House between December 1856 and January 1857. Many pieces, including this example, were heavily restored, or made up of a mixture of old and new pieces.

Sgabello type chair, partly gilt. The support in front is carved with strapwork, terminal figures, masks, etc. with a shield of arms in the centre, described by Pollen as 'argent and gules, per fess, over all a cross ancré of the tinctures of the field counter-changed' (two tau crosses, one inverted over the other, painted in red and white). The back is fan-shaped, with perforated acanthus scrollwork, flanked by terminal figures and surmounted by two sphinxes forming a pediment.

The back is fitted to the seat using the three vertical mouldings which pass through the seat and are wedged. The chair is heavy and the joints generally tight. Possibly constructed using old seats and fronts. Gesso is visible below the gilding.

Condition (1/2006)
The back feet tipped. The reverse of the back leg is coarsely carved, and thinner (29mm) than that on 5686-1859 (36mm). There are variations between the two chairs in the guilloche moulding running below the seat - one more tightly carved than the other. The seat with a circular dish seems old, with plausible movement and worm damage. Replaced elements appear to be: turned stretcher, both side rails below the seat, the crest (which is sharp given its exposed position). Note that there is very damage to the exposed carving of the back.

See Clive Wainwight, 'Models of Inspiration' in Country Life, June 9, 1988 pp 266-267 which includes an illustration of a chair from this group, within a discussion of the acquisition of Soulages' collection.

This form of chair, known (from the 19th century) as a sgabello (Italian ‘stool’), first appeared around the mid-sixteenth century and seems to have been closely associated with Venice. Sixteenth-century Venetian inventories mention “sgabelli d'appoggio” (stools to lean against) or “scanni col pozzo” (stools with a back). The type developed from a four-sided, backless stool made from boards nailed together. It was converted into a chair by fixing a single-piece back into the enlarged seat board. This was achieved by cutting a mortise into the back of the seat board, into which the ‘tongue’ or tenon of the back was inserted and secured with a peg. The large flat surfaces of the front ‘leg’ and the back were covered with carved ornament, sometimes including a family badge. Walnut seems to have been most commonly used for the thick boards, with gilding to highlight the boldly carved repertoire of Renaissance style motifs such as scrolls, leaves, masks and term figures. The chair type was heavy and unstable to use but provided prominent surfaces for fashionable, carved ornament. Such chairs were made in large sets for the houses of the nobility, to stand facing forwards along the walls of entrance halls or the portego, a large, well-lit and richly appointed room for entertaining. They were probably intended less for sitting than to be part of an integrated interior, and could be moved around, and seat-cushions added as occasion demanded.

The V&A has 35 examples, most of which were acquired from Jules Soulages (1803–1856), a lawyer and collector from Toulouse. His collection of Renaissance artworks was exhibited at Marlborough House in London between December 1856 and January 1857, and subsequently purchased for this museum. Sgabelli chairs were popular with 19th–century collectors of Renaissance furniture, and it is probable that many were heavily restored or created for the market at that time. Replica sgabello 'hall chairs' were particularly fashionable and expensive during the 1890s.

Comparable examples
Ferenc Batári, and Erzsébet Vadászi ; edited by Elvira Király : Art of furniture-making from the Gothic to the Biedermeier: European Furniture from the 15th to the 19th Century in the Nagytétény
Castle Museum ([Budapest : Museum of Applied Arts], 2002.), no. 10 pp.23-24

John Hungerford Pollen, Ancient & Modern Furniture & Woodwork (London: George E. Eyre and William Spottiswoode, 1874), 108.
“5679. ’59. CHAIR. Carved walnut wood, partly gilt. The support in front carved, with strap work, terminal figures, masks, &c., with a shield of arms in the centre ; the back fan-shaped, with perforated acanthus scroll work, flanked by terminal figures, and surmounted by two sphinxes forming a pediment. Italian (Venetian). About 1560. H. 4 ft., W. 20 in. Bought (Soulages Coll.), 15l.
‘Hall’ or corridor chairs such as this, are rich and showy thought not over luxurious for use. The back is formed by three fan-shaped stiles and a top rail into two long triangular panels, while a piece is morticed into the top rail, and forms a carved and pierced top. These framing pieces are carved as well as the panels themselves, making both an inequality in the surface and a difference in the kind of carving used, that on the frames being short, and in the way of notches, &c., while the work on the panels is in delicate scrolls and volutes. The arms on the front shield are :—argent and gules, per fess, over all a cross ancré of the tinctures of the field counter-changed.”

Pollen, J. H. South Kensington Museum Art Handbook, Furniture Ancient and Modern, London, 1875. P. 71
J.C.Robinson, Catalogue of the Soulages Collection: being a descriptive inventory of a collection of works of decorative art, formerly in the possession of M. Jules Soulages of Toulouse; now, by permission of the Committee of Privy Council for Trade, exhibited to the public at the Museum of Ornamental Art, London: Marlborough House, 1856, nos. 604-611, pp. 167-8 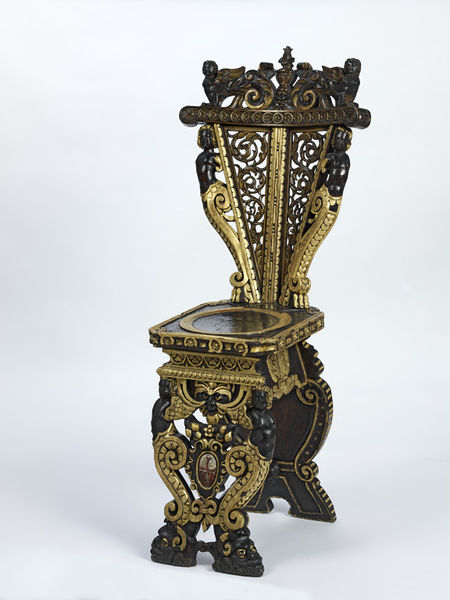