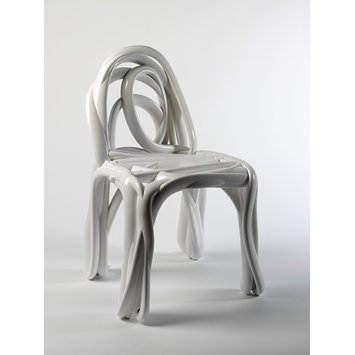 This chair was the result of a pioneering experiment to compress the normally lengthy process of moving from a design idea to a finished product; in this case from a sketch to a finished piece of furniture. Front Design are a Stockholm-based group of female designers. They became interested in the possibilities of motion capture and 3D-printing during a video game project, ‘Representation of Things’, in which they explored designers’ visualisations of objects, and the design sketches from which ideas and finished objects are eventually formed. The 'pen', developed by Crescent, which was used to 'sketch' the chair, works with motion capture technology to record a three-dimensional design of the finished object, which is then captured as a digital file. This file was then fed to a 3D printer usually used to make parts for racing cars, which built up the chair, layer by layer, using a liquid ABS-like resin strengthened with tiny particles of ceramic.

This chair was the result of a pioneering experiment to compress the normally lengthy process of moving from a design idea to a finished product; in this case from a sketch to a finished piece of furniture. The chair was conceived by the Stockholm-based designers known as Front, in 2005 (Sofia Lagerqvist, Charlotte von der Lancken, Anna Lindgren and, at that time, Katja S'vstr'm, who subsequently left the group). They started from the idea that, with 3D printers available as prototyping tools — though not as common as they have since become — perhaps they could find or develop a tool to read their sketches. Having designed a computer game ('Visualisation of Things'), they were aware of motion capture technology and approached a local Swedish company who, at the time, were recording dancers at Stockholm’s Royal Theatre. They convinced both parties to allow them to come along during a lunch break to see if the idea might work and, on the basis of a 15 minute trial, it was successful. They developed the concept further and then spoke to Marc Benda of the Friedman Benda Gallery, New York, who provided the funding for printing a first group of furniture at Alphaform in Rusko, Finland. This was the first time Front had worked on limited edition designs. They regarded such objects as offering the possibility of experimentation that would otherwise be unaffordable. The Sketch pieces, including this chair, were shown at the international design fair, Design/Miami, in December 2005 where they attracted considerable attention. The subsequent printing of an edition led to the objects shown at Design/Miami being referred to as the prototypes.

In September 2006 Front began a residency at the institute for contemporary art in Tokyo known as Tokyo Wonder Site. Here they developed tools for better control of the technology, working with local motion capture software developers Crescent Inc. A 2006 video of the Front designers apparently drawing the objects in the air became a video sensation. The ‘pen’ that Front use in the video was developed by Crescent. It was at this time, in 2006, that Friedman Benda commissioned the first of the edition pieces to be printed, this time at Acron Formservice, Anderstorp, Sweden, and with a different material from that used in 2005 (powdered nylon, painted). Front moved onto other projects and the Sketch series was not developed further although Friedman Benda eventually sold the entire edition of eight.

This chair was part of a pioneering experiment to compress the normally lengthy process of moving from design idea to finished product. An initial draft sketch was converted into a piece of furniture using motion capture. The design was sketched in the air and the movements recorded and converted into a 3D digital file for printing.

Prototype from initial production run of six (one prototype; two artists' proofs; edition of three for sale). The prototypes from the series were made using a liquid ABS-like resin, in Finland, by Alphaform, a company which printed parts for racing cars. All other examples from the edition were subsequently printed by Acron Formservice, in Anderstorp, Sweden, by a 3D printers' using a powdered polyamide (nylon) resin.

The technology used in the Sketch chair relies upon motion capture technology, commonly used in the world of cinema. Through this technology a movement in space can be captured as a digital file. That digital file is then used to re-create the sketch in three dimensions in a 3D-printer. For this 2005 prototype, Somos 14120 resin (an ABS-like liquid) was placed in the printer and subject to UV lasers, which set the resin horizontal layer by horizontal layer following the design in the digital file. The printing process took around 12 hours to complete. 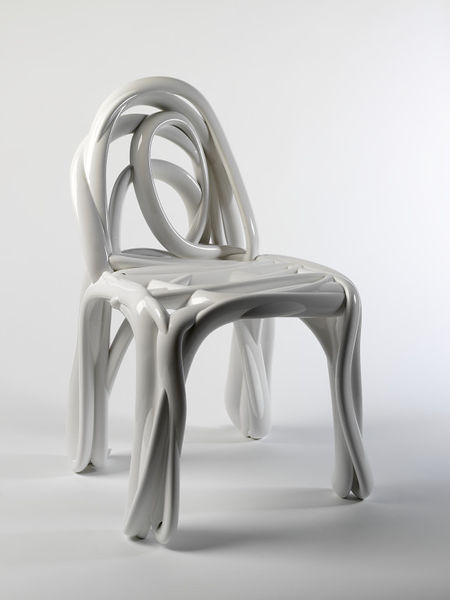