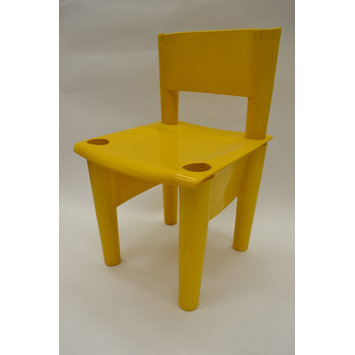 One of a set of twelve Junior (also called Chica) chairs in red and yellow plastic, each one comprised of four modular components that can be dismantled and rebuilt into creative play spaces. Three of the parts are identical and interchangeable as the chair legs and chair back. The lightweight construction enables older children to take creative control and reconfigure the chairs into dens, screens or any play space they wish; so it's both furniture and building game.

The chairs were designed by Giorgio Decurso, Jonathan De Pas, Donato D'Urbino and Paolo Lomazzi; Milanese designers who trained as architects and who embraced the post war spirit of optimism to create fun and flexible pieces of modern design. The chairs were produced in four colours: red, yellow, blue and white.

Children's furniture acquired a new status in the 1960s and 1970s when lightweight, colourful, durable and easily washable plastics provided designers with the ideal material out of which to make innovative child-friendly furniture. The modular designs and multi-use assemblages of this period addressed the notion of removing adult preconceptions of what child's play should be, instead handing control to the child.

Yellow plastic chair constructed from four parts: the seat and three identical parts which are interchangeable as the chair legs and chair back.
The three identical leg/back parts are made of two, tubular legs with a rail between them which, when the chair is constructed, forms either the side rail or chair back depending on where the part is placed. The rail is angled slightly to provide comfortable back support for the sitter. The legs are tapered so can nest into each other or into any of the four holes on the seat base, providing varied building possibilities. At the top of each leg tube there is a 2cm groove.
The seat has a shallow indentation and a downward curved lip at the front. There are four circular holes, one in each corner of the seat, with 6cm tubes extending down from the holes, underneath the seat. These short tubes fit inside the top of the tubular leg pieces when the chair is constructed.

This chair is one of a set of twelve red and yellow plastic chairs which were part of a group of objects purchased from a sale 'Design for Kids' at the auction house Tajan in Paris. The sale was dedicated to the collection of post war children's furniture belonging to German furniture collector and design gallery owner, Dr Stefan Reinke. His collection has also appeared in the exhibition and publication 'Fidgety Philip! A Design History of Children's Furniture' shown at the Imperial Furniture Collection in Vienna and MARTa in Herford, Germany in 2006/7. 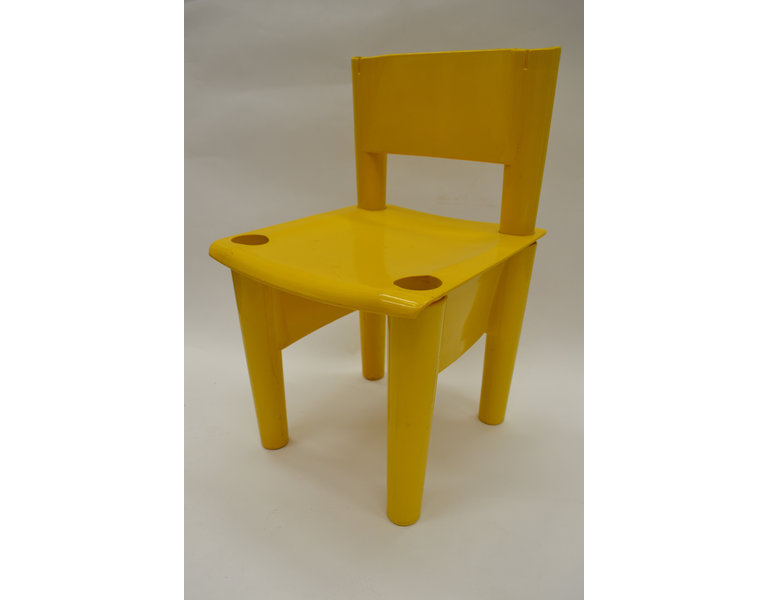