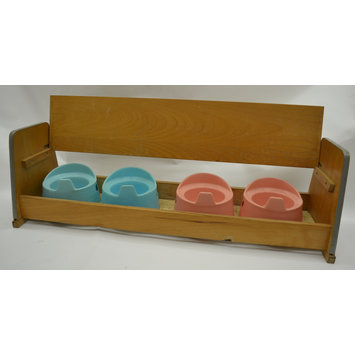 This potty bench was used for toilet training in the 1970s, probably in an East German (GDR) nursery as the potties have the marks 'Made in GDR/DDR' on their bases.

The Communist German Democratic Republic (GDR) placed great importance on education and its nurseries and preschool education provided free nursery places to the many working mothers in East Germany. These state-run nurseries were equipped with potty benches on which, several times a day, every child sat down and remained seated until done. "This not only aimed at training [children] to use the toilet, it was a first step to social education." (quote from Berlin's DDR Museum).

The authoritarian and rigid lines on which these nurseries were run, encouraged children to group-think rather than using creativity and critical thinking in their education. The group toilet training on potty benches was one of the many methods used by the state nurseries to programme children in early childhood to follow orders in a national culture that rewarded conformity and penalised individualism.

A wooden bench, supported by trapezium sides which serve as legs, and a pivot-hinged seat that lifts to reveal four plastic potties, two blue and two pink. When the seat is raised it acts as a back rest for the potty users and when lowered onto wooden brackets, it forms the bench and storage locker for the potties.

The potties sit, side by side, on a timber board which is covered with cream and brown marbled, plastic laminate on its top face. Two horizontal braces run the length of the bench, attached to the lower part of the trapezium sides/legs; these add structural support and help the potties remain in place. The trapezium sides/legs are edged with grey rubber. The moulded plastic potties have slightly raised backs to support the child and a raised part at the front which fits between the child's legs when seated. The potties are stackable; each has a hole on either side to aid carrying. Three potties (one blue and two pink) have identical inscriptions: 'Made in GDR / Polyha' on their bases. The fourth potty is marginally smaller, slightly paler blue and has the inscription 'Made in DDR / Polyha on its base'.

This potty bench is part of a group of objects purchased from a sale 'Design for Kids' at the auction house Tajan in Paris. The sale was dedicated to the collection of post war children's furniture belonging to German furniture collector and design gallery owner, Dr Stefan Reinke. His collection has also appeared in the exhibition and publication 'Fidgety Philip! A Design History of Children's Furniture' shown at the Imperial Furniture Collection in Vienna and MARTa in Herford, Germany in 2006/7. 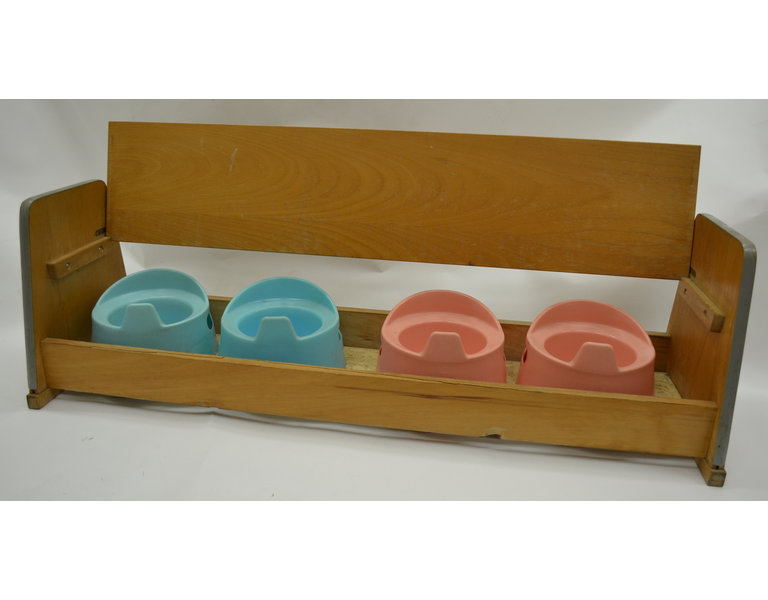