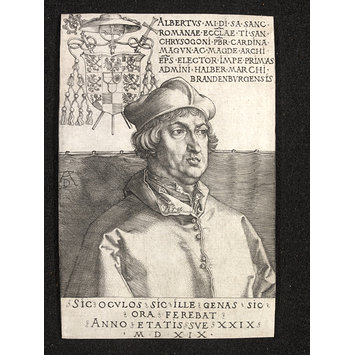 This engraving depicts Cardinal Albrecht of Brandenburg who commissioned it from the artist Albrecht Dürer. For the engraved metal plate and two hundred examples of this print, Dürer was paid two hundred gold coins and enough luxurious damask cloth to make a coat.

Dürer had seen Albrecht of Brandenburg at a political gathering in Augsburg in 1518 and made a drawing of him in black chalk. In the chalk drawing the cardinal is looking in the opposite direction and the background is blank. It was this chalk drawing which Dürer then used as the basis of his engraving. The textile hanging strung from loops on a wooden or metal rod in the background which bisects the background horizontally, was added when the drawing was turned into an engraving. So too was the coat of arms which incorporates the distinctive wide-brimmed, flat, (red) hat with multi-tasselled ties, worn by cardinals in the Renaissance. This cardinal’s other titles are given in Latin in the inscription above his head while the strip across the bottom reads “Thus were his eyes, his cheeks, his features at the age of 29, 1519.”

The image shows the Cardinal facing slightly to the right. Behind him is a textile hanging strung from loops on a wooden or metal rod which bisects the background horizontally. There is a coat of arms which incorporates the distinctive wide-brimmed, flat, (red) hat with multi-tasselled ties, worn by cardinals in the Renaissance. This cardinal’s other titles are given in Latin in the inscription above his head while the strip across the bottom reads “Sic Oculos sic ille genas sic ora ferebat . Anno etatis sue XXIX . MD XIX'.

'AD'
The artist's monogram which appears as though woven into the textile hanging in the background, on the left of the print.

'ALBERTVS.MI.DI.SA.SANC.ROMANAE.ECCLAE.TI.SAN.CHRYSOGONI.PBR.
CARDINA.MAGVN.AC.MADGE.ARCHI.EPS.ELECTOR.IMPE.PRIMAS ADMINI.HALBER.MARCHI.BRANDENBVRGENSIS'
Albert, by Divine Mercy the most Holy Roman Church's Titular Presbyter Cardinal of St.Chrysogonus, Archbishop of Mainz and Madgeburg, Primate Elector of the Empire, Administer of Halberstadt, Margrave of Brandenberg.
at the top

Subsequently included in a book "Das Heiligtum zu Sachsen" Halle, 1520, of woodcuts illustrating the collection of relics in Halle owned by Albrecht of Brandenburg in his capacity as Archbishop of Magdeburg.

Albrecht was the local cardinal for Luther in the Wittenberg diocese.

From 'Albrecht Dürer and his legacy' by Giulia Bartram, British Museum Press:-

Dürer used the preceding portrait drawn in Augsburg the previous year as a model for this engraving, and also a small pen and ink drawing based on cat. no.146 as a working study (Bremen, Strauss 1519/3). The engraving was commissioned by the cardinal himself, as we know from the artist's letter written in early 1520 to Georg Spalatin, an adviser of Friedrich the Wise of Saxony:

I am enclosing three prints of an engraving for my gracious lord [i.e. Friedrich the Wise]. It was engraved at the request of my gracious lord of Mainz [Cardinal Albrecht]. I sent the copper plate to him together with two hundred impressions as a present. He then sent me most kindly two hundred gold guilders in return and twenty ells of damask for a coat.' [Rupprich I, p.85]

Dürer's engraving served as the title page the 'Hallesche Heiligthumsbuch' (Halle, 1520), a book with woodcuts designed by Dürer's pupil, Wolf Traut (ca.1480-1520), illustrating the reliquaries of Halle that belonged to the cardinal in his capacity as Archbishop of Magdeburg.'

Albrecht oversaw the church in Luther's diocese of [?Magdeburg - see note Curator's Comments]Wittenberg. This portrait prefaced a catalogue of Albrecht's large relic collection in Halle, which he displayed during church festivals to encourage devotion and raise money. Luther, who privately referred to Albrecht as a 'shitty bishop' ('Scheissbischof'), ridiculed the belief that people could achieve salvation through the veneration of relics.

Lettered at the top with a list of Albrecht's titles and, below, in Latin, 'Thus were his eyes, his cheeks, his features in his 29th year, 1519' 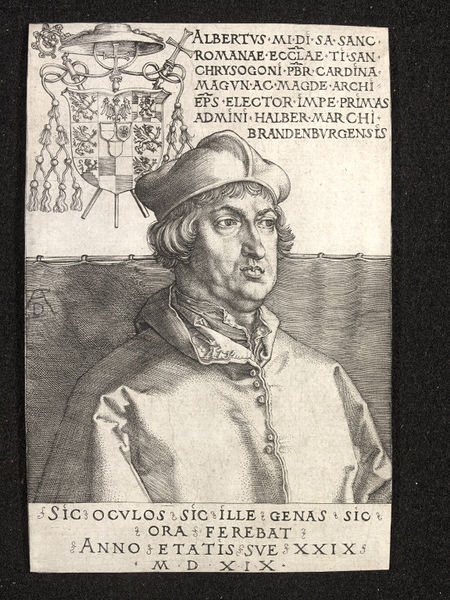