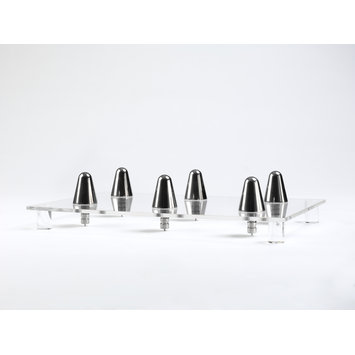 These Architectural Spikes, Manufactured by Kent Stainless, Ltd., an Ireland-based designer and fabricator of steel products, are made from cast, electropolished steel. Each spike is designed to sit partly above and partly below a surface. The exposed part takes the shape of a cone with a blunt tip, designed to be uncomfortable to rest on but not cause serious physical harm. The part that lies below the surface is a 2.8 cm cylinder protruding from the middle of the cone’s base, with three grooves around its circumference to create purchase with the material it is to be placed in. This might be a substance such as tarmac or cement, which sets around the cylinder; when used in a solid surface such as marble, a hole is drilled and a chemical mortar added to hold the spike in place. Usually several are grouped together to cover a wider open space.

On 7 June 2014 similar spikes to these gained the Twitter hashtag #AntiHomelessSpikes. They were photographed outside an upmarket apartment building in Southwark, London, where they had been installed in an already existing sheltered space nearby a doorway. Negative publicity after the photograph went viral increased perception of these kinds of architectural defences in public spaces and a petition to remove them from this spot, on the campaigning website change.org, quickly attracted over 130,000 signatures.

Activists were also spurred on to take direct action; on 12 June 2014, a group called the London Black Revs poured concrete over spikes outside a Tesco supermarket on London’s Regent Street. Tesco removed the spikes shortly afterwards.

The use of small street decor and street furniture to control public spaces has been an increasing feature of late- 20th century public design, particularly since the 1990s 1. This trend has become informally known as hostile, or defensive, architecture. It is a kind of hidden design feature, unremarkable enough to go unnoticed by those it is not targeting, creating the impression of public space while affecting marginalised populations such as youths or the homeless.

Hostile architecture can be found in many different forms, including metal spikes and knobs, large stones and bollards, and is used as a deterrent to people resting, skateboarding or performing other unauthorised activities on ledges, doorways and underpasses. It is even found on street furniture nominally designed for people to linger on, such as benches with several armrests or sloping seats.

As a type of street furniture used in public space design, these metal spikes connect with similar objects from the Metalwork department’s historic collections, including ornamental ironwork fencing, gates and locks and keys, which divide public and private spheres. These spikes represent an often unnoticed type of design that expresses ideas about the differentiation between public and quasi-public spaces and the increased regulation of social boundaries through architectural design.

Notes
1 Michael Shea, writer for Discover Society, refers to Mike Davis’s “City of Quartz: Excavating the Future in Los Angeles” (1990), in which he documented the then innovative barrel-shaped bus stop benches being introduced that were impossible to lie on:
Michael, S. (2014). On the Frontline: The Architectural Policing of Social Boundaries. [online] Discover Society. Available at: http://discoversociety.org/2014/08/05/on-the-frontline-the-architectural-policing-of-social- boundaries [Accessed 19 Jun. 2015].

Architectural Spikes, set of 20, cast electropolished steel. Each spike is designed to sit partly above and partly below the surface, the exposed part takes the shape of a cone with a blunt tip, designed to be uncomfortable to rest on but not cause serious physical harm. The part that lies below the surface is a cylinder protruding from the middle of the cones base, with threee grooves around it.

These cast stainless steel spikes are intended to discourage people from sitting or sleeping in various spaces in the city. The spikes sit 4.5 cm above ground with a 2.8 cm cylinder below. Protests in 2014 brought them to wider public attention. One set of ‘anti-homeless spikes’ were even subject to direct action, when protesters tried to submerge a set of spikes in cement on Regent Street in June last year. 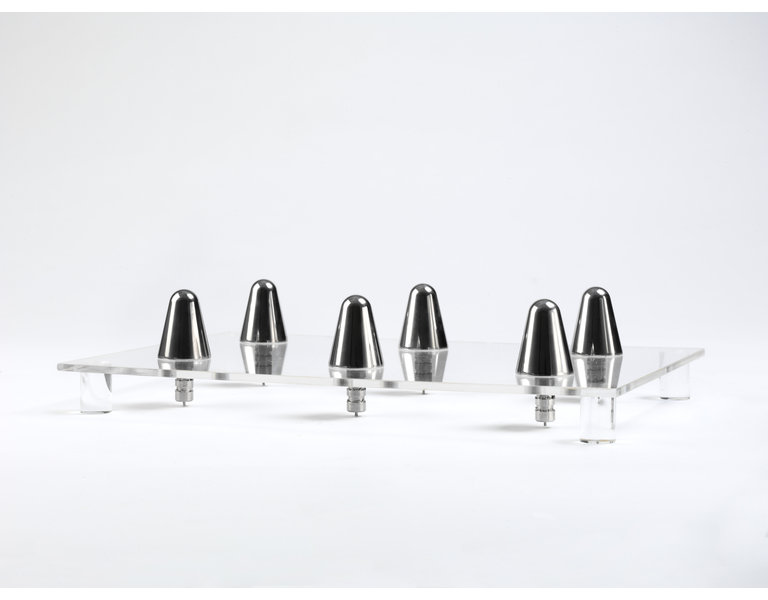