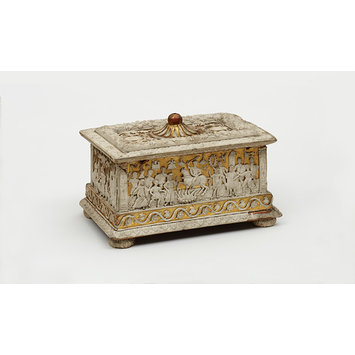 Horrific scenes from Roman legends often decorated 16th-century objects, partly because their owners enjoyed finding new moral meanings in them. A warning to the curious appears on the side of this casket: the hunter Actaeon is torn apart by his hounds because he spied on the goddess Diana as she bathed. The decoration is moulded from a lead-based paste known as pastiglia, set against a gilded ground.

Oblong casket on low, bun feet, the lid hinged. All visible surfaces are decorated with pastiglia decoration of moulded decoration of small figures in lead-paste composition, set against a gilded ground. The scene on the front shows the Torments of Marcus Attilius Regulus; the back shows the Self-sacrifice of Marcus Curtius; the right side shows Pyramus and Thisbe; the left side shows the Death of Actaeon; the lid is decorated with garlands and grotesque decoration with a conical rosette surmounted by a ball. The front shows a small keyhole, from which protrudes a small metal rod. The rod is attached on the inside to a small vertical metal strip. This is almost certainly a nineteenth-century addition. The inside of the box is of plain wood, with traces of paint, but quite rough and ready. It is not compartmentalised.

Alder wood, with white-lead based decoration and gilding.

Bought for £1 .16s (no other information recorded in acquisition register)

This type of casket appears to have assumed a variety of roles ranging from jewellery boxes to the Italian Renaissance equivalent of the sponge-bag. James Yorke notes that 10 pastiglia boxes were made for Verde d'Este as part of her nun's dowry for holding her smaller possessions, including combs, rosaries and tooth-picks in 1452-53. Yorke mentions, from another inventory, boxes described as decorated with 'figure de moscho (musk) relevadi (in relief)', to hold 'paternostri (rosaries) de moscho' and 'ungue da denti et scriminali (tooth brushes)'.

The present box may have been presented as a gift, containing objects such as brooches, gold necklaces, and carved ivory needle cases, from the groom to his prospective bride during the prolonged courtship period before marriage. James Yorke writes that what has been referred to as 'pastiglia' from c.1900 onwards would seem to have been called 'pasta di muschio' in accounts in Ferrara from c.1450 on. The word 'muschio' would imply that such items were originally scented.
Certainly, Isabella d'Este appears to have stored the perfumes she made in little boxes, such as pastiglia boxes, which may have had something to do with preserving the scent or enhancing it. The use of scent in the manufacture of these boxes may have been the equivalent of a sachet of lavender placed in a drawer. These boxes were not used exclusively by women, as the casket given to Cardinal Cles demonstrates, and they were also a firm favourite with Duke Borso d'Este.

The principal ornamentation of these caskets falls into four groups: scenes from ancient Roman history; subjects drawn from mythology; purely ornamental designs ‘all’antica’, and a few scenes derived from the Old and New Testaments. Pastiglia boxes with relief scenes from Roman history are representative of the renewed Renaissance interest in Antiquity, and the shared ideals of lofty purpose and moral fortitude exemplified by stories such as that of Marcus Curtius or Attilius Regulus.However the classical and biblical scenes, such as the story of Pyramus & Thisbe, or Susanna and the Elders, also served to highlight the power of love and the strength of female virtue – appropriate exempla for young newly weds.

The application of grotesque and floral ornament on all the areas not already decorated with figurative scenes is typical of the still strong horror vacui of the Middle Ages.

There is also a close relationship between bronze-makers and pastiglia box-makers in terms of the iconography used. Andrea Mantegna created iconographic models which were to be used, through intermediaries, by the white lead pastiglia industry in northern Italy.

Presumably this must have depended on the purpose to which the casket was put. If used for holding jewels or items of personal hygiene, they would have been placed in the camera, and many authors view them as pendants to painted bridal chests.
If used to hold small objects such as coins and statuettes ‘all’antica’, as de Winter suggests, then they may have been found in the study. I think the plain, ungilt interior of this box may indicate that it was used to contain paternosters, brooches or things pertaining to the female toilette, rather than items to be kept and showed off in a studiolo.

What is certain is that they were highly decorative and clearly meant to be seen. They must have stood on convenient shelves and tables where they could be admired.

This box is very similar in design to box W.24-1953 - it is possible that they originate from the same workshop. They both have a small metal rod protruding from a hole in the front panel and attached to a strip of metal inside.

'Small Coffret, in putty or stucco work, Italian-circa 1490, length 6 1/2in., width 4 1/2in., depth 3 5/8in. The ornamentation is appliqué work in relief, on a gilded ground. The sides are covered with relievo subjects, with an arabesque pilaster at each angle; the base and margin are decorated with ornamented mouldings, and the top of the cover has a raised torus wreath, forming a border, the panel within being filled in the centre with a conical or dome-shaped rosette, surmounted by a ball, and the ground spaces at the ends with masks and scroll foliage in relief. The subjects on the sides of the coffret are:-1. In front, Curtius leaping into the gulf. 2. At the back, the triumph of David. 3. At one end, two ships; and 4, at the opposite end, two warriors in combat, mounted on elephants, with a third, on foot, holding an Oak branch. Many other coffrets of this peculiar style and material exist in collections; they have such a close resemblance to each other as to suggest the belief that they are all from the fame fabrique.'
Ancient and Modern Furniture & Woodwork in the South Kensington Museum, described with an introduction by John Hungerford Pollen, (London, 1874), p.25

'Box, Covered with stucco, with various figure subjects in relief. German. 16th century. H. 5 1/4 in., L. 7 3/4 in. Bought, 11l. 16s.
Wood, covered with white composition, bound with a brass moulding below, and mounted on brass feet. The sides have pilasters decorated with tiny arabesques. It will be seen, from the smallness of the entire box, what is the scale of the arabesque decorations, yet animals as well as flowers, scroll-work, &c., have a place amongst them. The four sides have four as-relief compositions on them. The front contains the deth of Regulus, the Roman general. This famous and almost mythical character, stands for the type of 'Antique Roman' patriotism. He was Consul of the Republic with Mankius Vulso Longus in 256 B.C. On another side we see the self-devotion of M. Curtius, leaping, armed and mounted, into the chasm in the Roman Forum. Another composition is the story of Pyramus and Thisbe; and the fourth the Metamorphosis of Actaeon into a stag pulled down by his own pack of hounds. The figures are scarcely two inches high, and all details of dress, &c., are entered into with the 'thoroughness' of good German art of the 16th century. It is probably Nuremberg work of the time of Charles V.'

PASTIGLIA BOXES
Gilt pastiglia boxes were mostly made in Venice and Ferrara from about 1480 until 1550. Pastiglia or pasta is the name given to white lead paste, bound with egg white. This was often scented and described in contemporary inventories as pasta di muschio (musk paste). The pastiglia figures and motifs were shaped with a lead mould and then glued to the gilt surface of the box - hence their frequent recurrence on other boxes. The boxes are decorated with legends of Ancient Rome and the scenes copied from woodcuts such as Jacobus Argentoratensis' Triumph of Caesar (Venice, 1504) or illustrations of Livy's Roman History.
(Label text, circa 2000, from old Medieval & Renaissance Galleries) [2000]
Small display curated by James Yorke, gallery 126, 1984-1985

The lid of this cassetta is elaborately decorated with an interlacing pattern on the lid and a lavish frame, which encloses a gilt and pastiglia pinnacle, with bearded masks, harpies and dragons on either side. Boxes with such lids appear to come from a highly prolific workshop, called the “Workshop of Love and Moral Love Themes.” The front consists of the “Torments of Regulus”, the back “The Sacrifice of Manlius Curtius”, the left side the myth of Actaeon, and the right that of Pyramus and Thisbe. On both the front and back scenes, the narrative is composed of the protagonist, flanked by two rows of spectators either gesticulating or carrying exotic banners. Figures are repeated other boxes, and on this box, the bearded Venetian Soldier, referred to by de Winter as the “good natured lancer”, appears on the far right both on the Regulus and Manlius story, and as Actaeon, although with a stag’s head superimposed on his body. Diana and the nymphs, surprised by Actaeon, are a truncated version of the Goddesses in “The Judgement of Paris” or box. The craftsman is apt to place trees in the centre, and they appear to be growing from the heads of Regulus and Thisbe, who reappears as Coriolanus’ wife in the box. The base consists of a pastiglia ivy frieze on a gilt background and an acanthus base. The box is an example of tragic myths from Ovid’s metamorphoses, mixed with legends of the old Roman republican virtue of self-sacrifice to the state. Curtius threw himself into a chasm to stop an earthquake threatening Rome, and Regulus returned to Carthage to face death after urging the Senate not to make peace with that city during the Punic Wars. [1984-1985]
Casket
About 1500

Horrific scenes from Roman legends often decorated 16th-century objects, partly because their owners enjoyed finding new moral meanings in them. A warning to the curious appears on the side of this casket: the hunter Actaeon is torn apart by his hounds because he spied on the goddess Diana as she bathed.

In the 15th and 16th centuries most people stored small belongings in a casket (cassetta) rather than drawers. Despite their locks, these caskets are unlikely to have contained valuables, as their light wooden frames and delicate ornament (white lead mixed with egg, called pastiglia) are not secure. Instead, they probably held trinkets or toiletries such as tooth and ear picks. [2008]
BOX (CASSETTA)
Gilt wood (alder) with white lead based pastiglia decoration
NORTH ITALIAN; about 1500
1565-1855
From the Soulages Collection

The following stories are illustrated: the Torments of Attilius Regulus on the front, the Sacrifice of Actaeon on the back, the Death of Actaeon on the left side, and Pyramus and Thisbe on the right. [Pre-2006] 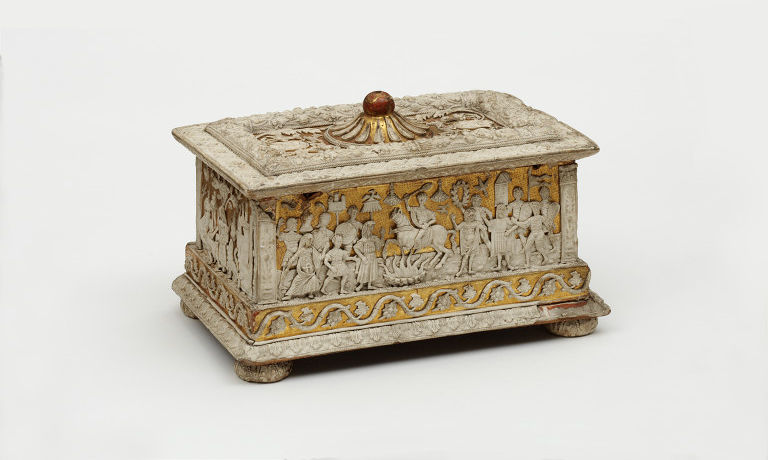