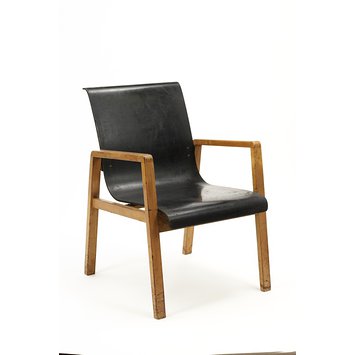 This chair was originally designed for the veranda of the Paimio Sanatorium. Designed by the architect Alvar Aalto, this was an isolation hospital for tuberculosis patients in Turku, Finland that Aalto began designing in 1929 and which was completed and furnished in 1933. The chair seat and back are made from laminated plywood, and appear to ride free, within a rigid box frame of birch that forms both the chair legs and arms. The angling upwards and inward of the legs, coupled with the thin seat and back, with its rolled edges, gives the design a light appearance suitable for use both indoors and out.

The retailer Heal’s described Aalto’s furniture as ‘better furniture for better times’. Distributed in the UK by the company Finmar, Aalto’s range was sold by high-end British retailers of furniture and appeared in a large variety of contexts, ranging from up-market private residences through to municipal buildings such as Finsbury Health Centre in London. The De La Warr Pavilion in Bexhill-on-Sea for example ordered 50 of these ‘veranda’ chairs.

Armchair of solid birch and black-stained birch ply. The sides of the chair are each constructed of three pieces of rectangular-sectioned solid birch (unstained) forming the legs and arms as a single, splayed arch. These elements are joined by knuckle joints, with the arm sections crossing the top of the upright sections. These frames are each reinforced by a single stretcher of similar section, set at seat height, tenoned into the front and back uprights with unequally shouldered tenons. These stretchers slope down from front to back. Two cross rails, set slightly below the side stretchers, join the two side panels and provide the support for a combined seat and back panel. The front cross rail is jointed with a tenon cut closer to the front than the back of the uprights. The back cross rail is similarly tenoned, closer to the back. The front face of this is cut at an angle, to support the lower part of the back of the chair. The combined seat and back panel is formed from a single rectangular panel of birch plywood, stained black, steamed and bent at the back, lower edge, down-curved on the front edge, and back-curved on the top edge. The seat is further supported by a mid-rail which is fully tenoned into the side stretchers. All elements except the seat/back are varnished but not stained. On the undersides of rails, which are unvarnished, the wood has either been stained a darker brown or has oxidised considerably.

Solid birch wood, with laminated birch plywood panel moulded to provide a combined seat and back

Circular paper label, the surface and any inscription torn off
Under the mid-rail beneath the seat

FINMAR LTD DESIGN REG
787811 - 19
MADE IN FINLAND
On aluminium label (narrow, rectangular) attached with pins to the underside of the mid-rail beneath the seat. The inscription is in aluminium-coloured lettering on a black ground.

A Gifu [?]
Note in ink under left (PR) side of mid-rail under seat, set at 180 degrees to the metal lable. The pencil inscription recorded in the next entry is between these two inscriptions. The second of these is in script

1269
In pencil, between the two elements of the last recorded inscription

Historical significance: Chair designed for Paimio Sanatorium, one of the most import modern buildings in Europe.

Armchair of birch and birch plywood, the seat and back panel stained black, designed by Alvar Aalto. Finnish, 1932

This stacking chair was designed for Aalto's Paimio Sanatorium, one of the most important modern buildings in Europe. [1989-2006] 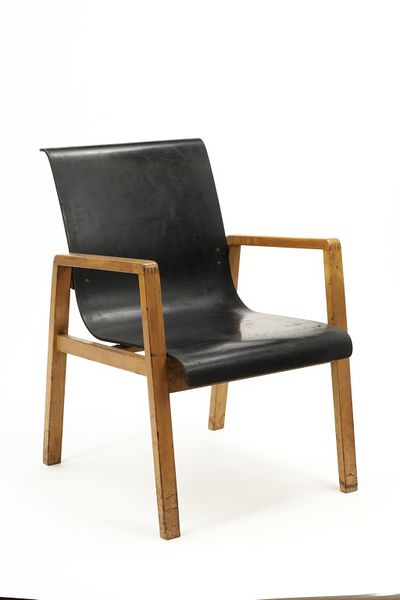