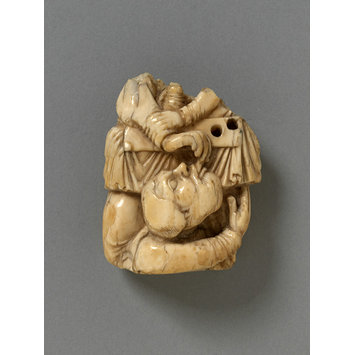 Judas at the Last Supper

Judas’s head is seen in profile, receiving bread from the hand of Christ whose upper half is missing. The bread was a sign of favour, making Judas’s subsequent betrayal all the more evil. This relief probably formed part of an altarpiece showing scenes from Christ’s Passion – the events associated with his death and resurrection.
The fragment is a masterpiece of expressive visualisation, capturing the moment at which Judas greedily identifies himself as the betrayer of Christ a the Last Supper

Ivory fragment depicting Judas at an abbreviated version of the Last Supper. At the bottom, the head of Judas turns upwards to receive the sop from the hand of Christ, whose upper body is now largely broken away. Unusually, Christ's hand is grasped by that of St. John. the piece. The background shows drapery.

Historical significance: The fragment is a masterpiece of expressive visualisation, capturing the moment at which Judas greedily identifies himself as the betrayer of Christ a the Last Supper (the meal held by Christ and his disciples on the eve of his Crucifixion). According to the Gospels, it was at this meal that Christ predicted his betrayal. In the Gospel according to Mark 14: 20 Christ is evasive when asked who will betray him, saying it is one of the twelve who "dippeth with me in the dish". In the Gospel according to John 13:26-27 Christ is far more specific, saying "He it is, to whom I shall give the sop, when I have dipped it. And when he had dipped the sop, he gave it to Judas Iscariot, the son of Simon". This is the scene depicted on the ivory fragment.

Judas is shown at the front of the table, being given the sop (bread soaked with wine) from the hand of Christ who is now largely missing. Christ's right arm is being restrained by the left hand of an Apostle who would have been sitting in front of him. The fragment is carved at each side and would not, therefore, have been any wider than it is now. The back is plain and is pierced with three circular holes for fixing to a background; the shelf carved into the back, running right across the width of the piece, facilitated the fixing of a separate piece or pieces of walrus ivory for the flanking Apostles.

The original appearance and context of this fragment are not easily reconstructed, however a scene of the Last Supper in a northern English Psalter of around 1200 (Bodleian Library, Oxford, Gough..Liturg.2,f.25) may help illustrate where the fragment would fit. The psalter shows Judas facing to the left, but his pose and that of Christ and the Apostle are similar, as is the depiction of drapery. Dean Porter has noted similarities with the sculptures of the Much Wenlock washing fountain of around 1190, in the thickness of the drapery folds and the squat proportions of the figures (1974, pp. 37-44). The Judas at the Last Supper fragment is closely related to the Deposition ivory fragment (V&A LOAN:SCPANON.1-1982) and may have come from the same altarpiece. 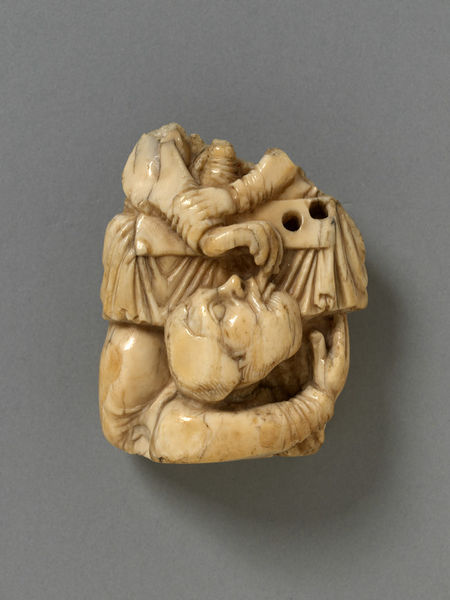