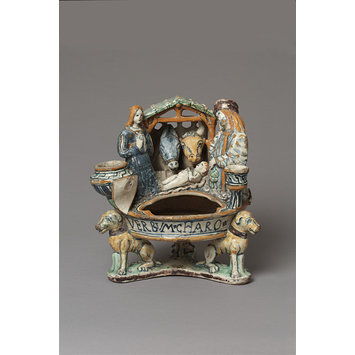 This colourful inkstand is surmounted by a group representing the Nativity. The Virgin Mary and Joseph sit either side of the naked Christ. These figures are placed in front of a stable from which an ox and ass peer out. It is probable that some sixteenth-century maiolica inkstands were commissioned as commemorative objects associated with the signing of marriage contracts. The scene reproduced here may have been intended as a model for the new family to contemplate.

There are two small receptacles, one to the left of the praying Virgin, and one to the right of Joseph. These pots, together with the central aperture, provided space for the equipment and materials needed for writing in the 1500s, including a quill pen, pen knife, ink and pounce for drying the freshly written words. The inscription painted around the rim of circular base can be translated as: THE WORD IS MADE FLESH BY THE VIRGIN MARY.

A sculptural group representing the Nativity rests on a circular shaped-based resting on the backs of three sitting dogs. A figure of the Virgin sits to the viewers' left, Joseph sits to the right and a figure of the naked Christ child lies on the ground between then. A small wattle-shed, containing an ox and an ass, provides the back-drop for the scene. There are two receptacles to either side of the figures of Mary and Joseph. The Virgin leans on the larger of the two. This inkwell has a blank shield leaning against it. Joseph rests against a smaller receptacle. There is a large central aperture in front of the infant Christ: this is marked with the letter G in dark blue. The front of the circular dish bears an inscription painted in blue capitals. There is a small circular hole to the left of the two animals.

The inkstand has been painted in dark blue, deep orange, manganese purple and copper green. Blue is the dominant colour.

The Nativity was a very popular subject for artists and makers and features widely across a range of object types and media. The description of Christ's nativity is included in the Gospel accounts of Matthew and Luke but neither account is very detailed. The scene here does not feature the three kings of Matthew's account, or the shepherd's of Luke's. The Virgin Mary, dressed in blue, is positioned to the viewers' left, her hands pressed together in prayer. A tired, bearded Joseph sits to the right. The naked baby Jesus lies between them, in front of a stable. The nakedness of the figure emphasises Christ's humanity. Luke recorded that Mary laid Jesus in a manger because there was nowhere else for them to lodge. The scene is witnessed by an ox and an ass, neither of whom are included in the Gospel accounts. The apocryphal Gospel of Pseudo-Matthew is the first to mention both animals: 'On the third day Mary left the cave and went to a stable and put the child in the manger, and the ox and the ass adored him.' The emphasis in the representation here is on the Holy Family and may have been intend as an exemplar for its owners as well as an expression of their piety.

Most noblemen, wealthy professionals and merchants would have a study or an area where then could undertake business. This type of activity required special furnishings and equipment. The inkstand emerged as a new type of object for the urban elite of Renaissance Italy. Inkstands could embody social values and were intended to make a statement about the literacy, refinement and level of culture of their owner. Inkstands were produced in significant numbers and in a range of materials including bronze, silver, terracotta and maiolica. They appeared in a wide variety of shapes, sizes and formats, usually combining decorative and functional elements successfully. They helped store the necessary materials for writing, including the quill pen, ink, pounce, pen knife and scissors for cutting paper. Some inkstands were clearly made as collectors' pieces, others were given as gifts. There is evidence that some sixteenth-century maiolica inkstands were commissioned as part of the rituals associated with marriage, specifically when the written marriage contract was signed.

Ceramic inkstand with a Nativity scene 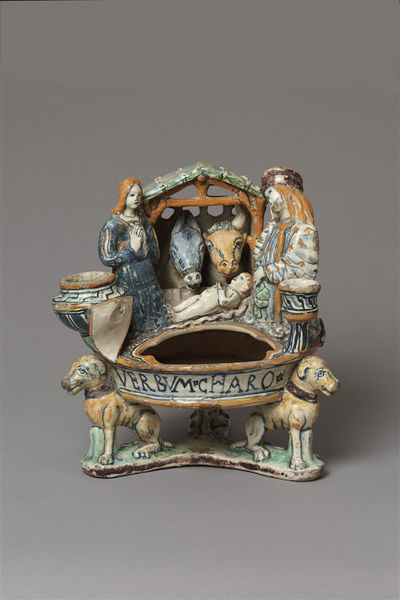