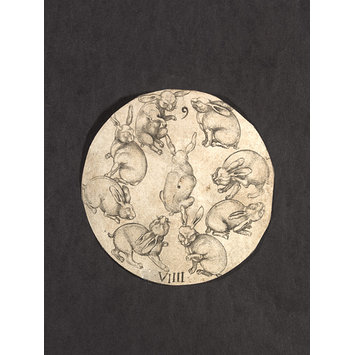 The Nine of Hares

Master PW's pack of seventy-two rounded playing cards shows the artist at the top of his form and is generally believed to be his last work in the medium of engraving. The engraving of lines in metal in order to print on paper developed from the goldsmith's long-established practice of decorating metal with engraved patterns. The technique was first used for printing on paper in the second quarter of the fifteenth century. It arose independently in Germany and Italy, probably slightly earlier in Germany. To begin with, engraving fulfilled a dual purpose. It was a means of original expression and of obtaining duplicated images of all kinds. Being a laborious and time-consuming technique, requiring immense skill, it was considered the most noble and appropriate technique in which to render the work of the great masters.

This card comes from a pack of seventy-two round playing cards and is unique in having five suits, rather than the customary four: roses, columbines, carnations, parrots and hares. The images on the cards depict plants and animals based on the study of nature, rather than of model books as previous engravers of cards had done.

The card is circular but has been trimmed at some stage; the uncut state has a border of three lines. There are nine engravings of rabbits or hares on the card shown in different poses. It is lettered with Arabic and Roman numerals, '9' and 'VIIII'.

'The pack of seventy-two round playing cards from which this card comes shows the artist at the top of his form. They are generally believed to be his last work in the medium of engraving. Detlef Hoffmann has noted that Master PW's cards depict plants and animals based on the study of nature, rather than of model books, as previous engravers of cards had done, showing blossoms in various stages of bloom, and face cards with various eccentricities: Maxmilian is said to have been the inspiration for the king of pinks. As Max Lehrs (1930) notes the center of each card is marked by a small black spot, as though a compass had been used to lay out the triple outline (this is missing from the V&A's example.) Master PW's deck is unique in having five suits rather than the customary four: roses, columbines, carnations (pinks), parrots and hares. Each suit consists of four face cards: king, queen and 'ober' ("mounted") and 'unter' ("on foot") jacks, or knaves, plus the numbers ace through ten. In addition, as a modern deck has jokers, Master PW's has a title and a closing card. The title card, a gothic trefoil with three crowns of the Cologne coat of arms, is inscribed with the words 'Salve Felix Colonia' ("Hail, happy Cologne"). The closing card, appropriately, features a young nude woman seized by Death.

These playing cards were copied by Teleman de Wesel, the Lower Rhenish engraver (in reverse) although the suit of roses as well as all of the tens from Master PW's series are eliminated and substituted by four new under-knaves. The cards were also copied by the Cologne engravesr, Johann Bussemacher (Cologne 1591) and Jacob Binck.

Since none of Master PW's surviving cards are mounted on cardboard, scholars have questioned whether they were actually intended for play. Although it is known that circular cards were used in India, the circular format would surely have proved something of a drawback in Western play, as would the excessive size of the deck, since all known card games require only four suits, totalling fifty-two or fifty-six cards. All seventy-two of Master PW's designs have survived in from one to six impressions, but no single repository owns a complete deck. Bologna (sixty-nine) and Dresden (fifty-two) have the most complete collections. Other impressions are found in the British Museum, London; Vienna; Cologne, Rothchild Collection, Paris; Amsterdam and Boston.'

Playing card with nine engravings of rabbits or hares

One of the earliest uses of printing was the mass production of playing cards. Previously they had been drawn or hand painted. This card is one of a pack of 72 printed playing cards consisting of five suits: hares, parrots, roses, columbines and carnations. 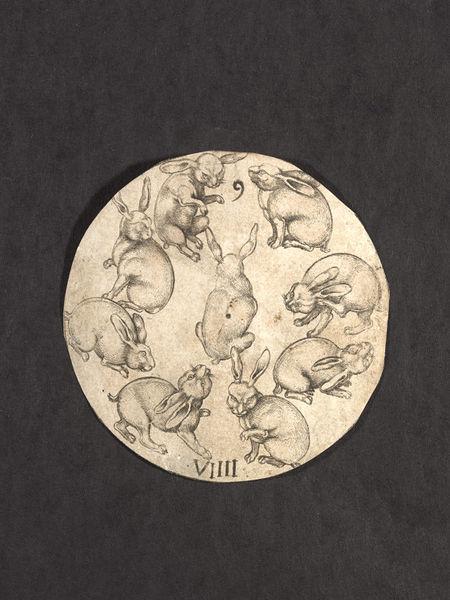