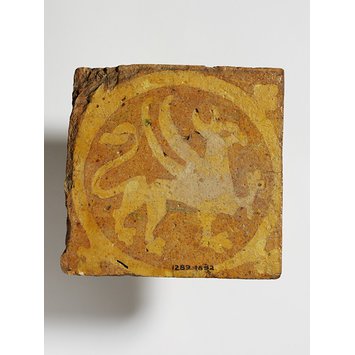 Pavements of decorated ceramic tiles were a medieval innovation. They were used to add richness and splendour to great churches initially but they were subsequently used in secular contexts, including castles and royal residences. The design on this example, from Abbotsbury Abbey in Dorset, has been created by inlaying white decoration into the surface of the tile.

The griffin combines the wings and head of an eagle with the body of a lion. The main source of inspiration for the portrayal of creatures was the Bestiary, a collection of descriptions of beasts to which Christian and allegorical interpretations were added.

The square tile is made of glazed earthenware and is decorated with a inlaid pattern of white clay consisting of a griffin within a circle. The griffin is represented in profile, facing to the right with one foot raised. The griffin is depicted with two wings, the head of an eagle and the body of a lion. The object number is placed just above the bottom edge of the tile in the centre. The inlaid circle features four points of foliage at each corner. The surface of the top-left had corner is damaged and the white inlaid detail of foliage that once decorated this area is now missing.

Similar tiles depicting griffins were used to decorate Queen Philippa's apartments at Clarendon Palace, Wiltshire where they were set into the floor (Eames 1992, p40-41) (Cherry 1991, p16-17). The pavement at Clarendon is dated to between 1250-52. At Clarendon tiles featuring lions and griffins were opposed. The V&A's griffin tile is similar in design to those used at Clarendon, but is not identical, having two clearly separated wings.

The V&A's tile was acquired with two others also from Abbotsbury Abbey, Dorsetshire in England. Emden gives a brief history of Abbotsbury Abbey which he notes was founded in 1044 and dissolved in 1539. He gives a brief account of excavations at the site between the years 1871 and 1967. Emden includes two references to tiles which have the same design as 1289-1892, noting that there is an example at St Mary's Church , Tarrant Rawston and another in the Ashmolean Museum, both of which are also from Abbotsbury Abbey.

The griffin was thought to combine the wings and head of an eagle with the body of a lion. The main source of inspiration for the portrayal of creatures was the Bestiary, a collection of descriptions to which Christian and allegorical interpretations were given. Griffins were depicted on range of medieval object types, including textiles and metalwork.

Red earthenware with an impressed design of a griffin infilled with white slip and covered with a clear lead glaze. From Abbotsbury Abbey in Dorset. English, second half 13th century.

Text for the current display to which the tile belongs reads as follows (transcribed 07-11-2006).

The earliest known pavement of two-colour inlaid tiles in England was made for a new chapel built for Henry III at Clarendon Palace laid between 1240 and 1244, the pavement consisted of a series of concentric bands of tiles. It is likely that some of the tilers responsible for this pavement moved on into Somerset where they produced similar pavements at Muchelney Abbey.

Further tiled pavements were commissioned by Henry II for Clarendon Palace between 1250 and 1252. The tiles were probably made at Salisbury, where similar tiles, decorated with lions, gryphons, birds and foliated ornament were being produced for the new cathedral. The craftsmen who made the tiles moved from place to place according to where commissions could be found. Their designs became widespread throughout Wiltshire, Hampshire, Somerset and nearby counties during the second half of the 13th century. []

The tile is from Abbotsbury Abbey in Dorset. 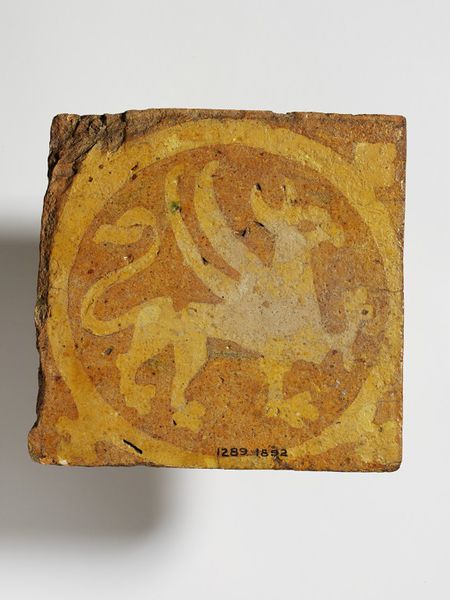