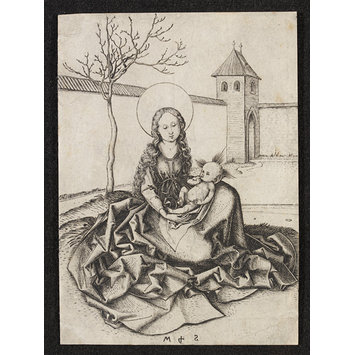 The Madonna and Child in the Courtyard

Schongauer has created a vivid and memorable Madonna and Child on a small scale using very economical means. For example, the single line indicating the Virgin’s circular halo creates, out of blank paper, the illusion of a brilliant light around Mary’s head which blots out the wall behind her. The Virgin is seated on a small hillock in a courtyard. The gateway in the background is an allusion to the idea that Mary was the gateway to heaven.

Paintings and sculptures of the Madonna and Child were very common in European art in the medieval period. When the making of prints on paper arrived in Europe around the year 1400, artists and merchants were able to distribute new, easily-transportable versions of this subject in much larger numbers. Eight examples of this print have survived to the present day but there may have been several times that number printed originally.

The Virgin Mary is seated on a lawn in the centre of a courtyard. The infant Jesus is sitting on her lap. A large circular halo surrounds her head. A cross-shaped halo of rays is emitted from the child's head. By the wall there is a small barren tree. Along the wall there is a path that leads to the gate of a tower in the corner of the courtyard. At the lower centre of the image is the monogram M+S with the S in reverse.

MS[the S in reverse] either side of a cross, the cross with a left arm which curls under the cross's upright.
The monogram of Martin Schongauer is at the bottom of the print in the centre. The monogram consists of Schongauer's initials and a goldsmith-like hallmark composed of a small cross plus the crescent from his family's coat of arms. This signature occurs in two forms: a few plates, apparently all done in the early 1470s, have an M with vertical sides; the majority have an M with slanting sides as in this example. (The Illustrated Bartsch, Vol.8 Part 1 Commentary, pg. 1)

The paper on which the image is printed has a watermark of a Bull's head with one vertical bar surmounted by an initial 'T'. From 'Catalogue X - Martin Schongauer' by N. G. Stogdon - 'BHT [Bull's head with the Tau-cross on a staff] marks are persuasively attributed to Antonio Galliziani (also Calcione, Galzion, Gallician, Gallicion, Galliziani). [Allan] Stevenson(?) hypothesised that he usually used a seal mark in large sheets, the BHT in small.'

From 'Origins of European Printmakiing' by Peter Parshall and Rainer Schoch - '...more recent research has shown, for instance, that the Bull's head with the T or tau cross used for the 'Missale speciale' was made by the Galliziani brothers at Sankt Albantal in Basel. The Galliziani brothers came from the Piedmont area of Italy and moved to Basel
ca 1450 where they purchased their first mill (Klingentalmühle) in 1453. Perhaps it is no coincidence that the four paper stocks of the forty-two-line Gutenberg Bible were made in the Piedmont, near Caselle, in the early 1450s. According to Needham, reams of paper were carried north over the Alps to the Rhine, down to Basel, and then by barge to Mainz. In the lid of the box housing the Lamentation are sheets of writing paper, one of which contains a Bull's head with T or tau cross.'

Also a painter, Schongauer made at least one hundred and fifteen prints in his lifetime. He was one of the first European artists to explore the full expressive potential of printmaking as a medium. Albrecht Dürer had hoped to become an apprentice in Schongauer's workshop but only arrived in Colmar after Schongauer's death in 1491.

The Madonna and Child in the Courtyard, engraving by Martin Schongauer; ca 1474

Germany, Colmar
Engraving on paper
Lettered with the artist's monogram and device

From the bequest of Miss Alice G.E. Carthew 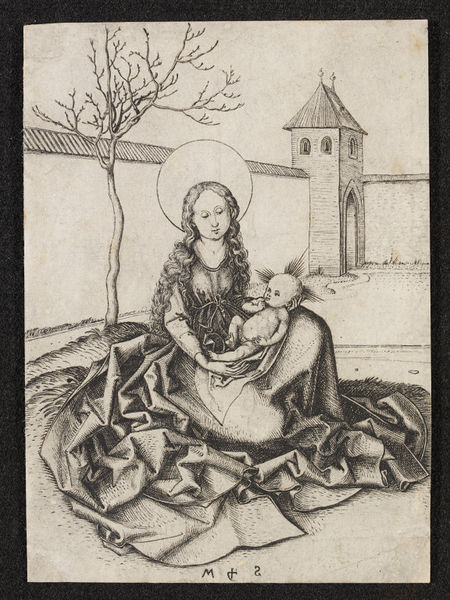