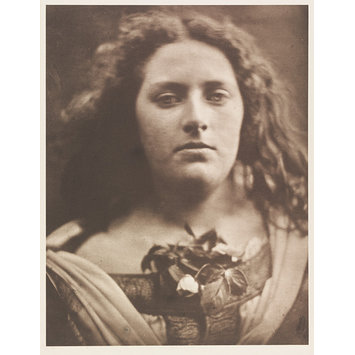 In late 1865 Julia Margaret Cameron began using a larger camera, which held a 15 x 12-inch glass negative. Early the next year she wrote to Henry Cole, the Director of the South Kensington Museum (later the V&A) with great enthusiasm – but little modesty – about the new turn she had taken in her work.

Cameron initiated a series of large-scale, close-up heads. These fulfilled her photographic vision, a rejection of ‘mere conventional topographic photography – map-making and skeleton rendering of feature and form’ in favour of a less precise but more emotionally penetrating form of portraiture. Cameron also continued to make narrative and allegorical tableaux, which were larger and bolder than her previous efforts.

In this image, Cyllena Wilson poses as Countess Rosalba, the main character in Henry Taylor's 1849 play The Virgin Widow. In Taylor's telling, Rosalba is torn between duty and romantic love.

Julia Margaret Cameron's career as a photographer began in 1863 when her daughter gave her a camera. Cameron began photographing everyone in sight. Because of the newness of photography as a practice, she was free to make her own rules and not be bound to convention. The kinds of images being made at the time did not interest Cameron. She was interested in capturing another kind of photographic truth. Not one dependent on accuracy of sharp detail, but one that depicted the emotional state of her sitter.

Cameron liked the soft focus portraits and the streak marks on her negatives, choosing to work with these irregularities, making them part of her pictures. Although at the time Cameron was seen as an unconventional and experimental photographer, her images have a solid place in the history of photography.

Most of Cameron's photographs are portraits. She used members of her family as sitters and made photographs than concentrated on their faces. She was interested in conveying their natural beauty, often asking female sitters to let down their hair so as to show them in a way that they were not accustomed to presenting themselves. In addition to making stunning and evocative portraits both of male and female subjects, Cameron also staged tableaux and posed her sitters in situations that simulated allegorical paintings.

In this photograph, entitled 'Rosalba', Cameron refers to the central character in Henry Taylor's play 'The Virgin Widow', written in 1849. The model is Cyllena Wilson who was adopted by the photographer when her parent died in the early 1860s. 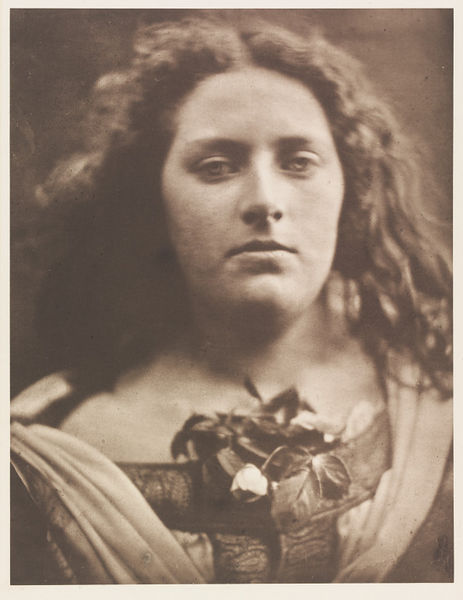