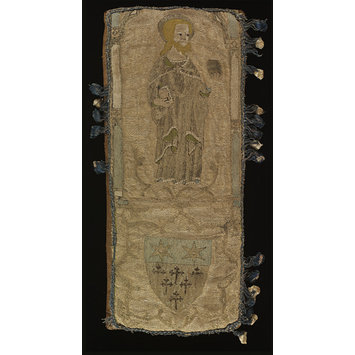 This embroidery reveals how a medieval ecclesiastical vestment might be cut down and re-used. A portion of an orphrey band has become a cushion by sewing it to a leather backing and putting decorative fringing around it (possibly in the 16th or 17th century). An orphrey is a decorative band used to adorn the vestments (priestly garments) used by Christian clergy (in particular, chasubles and copes) for church services. The cushion may have been used for kneeling for prayer.

The embroidery is worked in coloured silks and metallic threads on a silk background, which is backed with linen to make it stiff enough to support the heavy stitching. The embroiderer used underside couching and long and short stitch to create this densely patterned effect. The saint's robes are created through the careful use of vertical and horizontal areas of stitching. England was famed for its fine embroidery in the Middle Ages; this type of embroidery is often called ‘opus anglicanum’ (English work) today.

The saint is probably the apostle Philip because he carries a book and three loaves of bread. The coat of arms shows that the original orphrey was probably commissioned for William de Clinton, 1st Earl of Huntingdon. In 1329 he married Juliette de Leyburne whose coat of arms is embroidered on one of the other surviving pieces of this orphrey (now also a cushion).

Portion of orphrey made into a cushion (kneeler?) at a later date. There are three layers of materials: a fawn-coloured woven silk, a white linen interfacing, and a brown leather underside (which was added to form the cushion). The embroidery has been executed through the silk and linen layers as is evident from the way in which the stitching is visible on the back of the linen. The embroidery threads are blue, green, yellow and brown silk and silver gilt; the embroidery stitches are underside couching and split stitch. A fringe is sewn round the edge of the cushion, although much of the actual fringing is missing. It is blue, purple and white.

The embroidery comprises two compartments, the upper of which shows signs of having been cut down from a larger piece. In the upper section, between two pillars and below what was once a cusped arch, is the figure of a male saint. His long yellow hair falls on to his shoulders and he wears long flowing garments. A halo surrounds his head and he carries in his right hand a book and in his left three loaves of bread (which possibly identify him as the apostle St Philip). Metallic thread dominates the interpretation of the figure, being used horizontally and vertically to create the drapery of his robes. The face is in a light-coloured plain-weave silk with embroidered features. In the lower section, in a cusped octagon is a coat of arms, split into two sections: on the upper, are two stars on a blue ground, on the lower, five cross-crosslets (crosses whose own bars have cross bars at their extremities) - described in the accession register in heraldic terms as: 'argent, six cross-crosslets fitchée, sable, three, two and one; on a chief azure, two mullets or, pierced gules'.

Acquired from the Rector and Churchwardens of Catworth, Huntingdon, with the permission of the Bishop of the Diocese of Ely for the sum of £25 (with 836 to 840-1902) in 1902. The provenance was St Leonard's Church, Catworth. The cushions had been lent to the Exhibition of the Church Crafts League at the Church House, Westminster in May 1902 organised by W. H. St John Hope and shown in Brighton the previous October (a flyer for this exhibition is among the RPs). They entered the museum immediately after this second exhibition.

A note to Kendrick dated 11th January 1901 in the Registered Papers indicated that Mr St John Hope of the Society of Antiquaries had suggested that the cushions be purchased if possible since 'they were no longer utlized in the church' and 'such rare specimens of English embroidery would be safer and of more practical use to students in the custody of a National Museum' (P.G. Trendell). The Rev. W. Woodward of the church had to get the permission of the Bishop and Churchwardens in order to sell the five cushions for £5 each and 'would be glad if this could be done soon, as they want to restore the clock as a memorial of the corontation, and he wants to suggest that the money should be devoted to that purpose' (Kendrick, 23/04/1902). The V&A used Walter Crane as the expert to report on the cushions.

Historical significance: Significant for its embroidery which is of very high quality and typical of what has been labelled by certain historians as opus anglicanum, as an example of ecclesiastical embroidery with secular motifs, and as an example of part of a Catholic vestment recycled for another use.

This piece of embroidery formed part of an orphrey band on a cope, before being cut down into a cushion. The orphrey bands on copes formed a single long band that ran the whole length of the straight side of the semi-circular garment. This piece was probably located at the foot of the cope on the right hand edge at the front, as the saints on such bands tended to face each other across the opening of the cope, and coats of arms tended to be at the bottom. The piece representing the coat of arms of the donor's wife probably faced it. The embroidery is of the type often called opus anglicanum - work executed in England in the Middle Ages, famed abroad for its excellence, and commissioned even for the Vatican.

Copes
By the thirteenth century clerical attire was more or less stabilized throughout the Latin Christian church. According to the Rationale for the Divine Offices of the canonist and liturgist William Durandus (d. 1296), all ranks of the higher clergy were entitled to wear the cope (or pluviale) for processional occasions on feast days. As a result, inventories of monastic churches testify to the existence of a very large number of copes, Canterbury, for example, owning no fewer than sixty copes in 1315. (Dyan Elliot, 'Dressing and Undressing the Clergy', in E. Jane Burns ed. Medieval Fabrications. Dress, Textiles, Cloth, and Other Cultural Imaginings. London, 2004, pp. 56-58; Pauline Johnstone. High Fashion in the Church. Leeds, 2002, p. 11.)

The cope had developed from the same Roman garment (paenula) as the chasuble, but by the eleventh century had a different form: it was semi-circular and open down the front; the front opening fastened just below the neck across the chest with a short strip of embroidered material or a morse (a metal clasp); orphrey bands ran the full length of the front opening and on the back, the cope retained a vestigial hood which was triangular or shield-shaped. (Johnstone, op.cit.)

Speculation
It may be speculated that the orphreys were recycled into cushions after the cope wore out, or after the Reformation (most probably either during the reign of Edward VI or the Civil War when iconoclasm held sway) and were then used for kneelers in the Church of England. This speculation is based on the fact that they were still in the church at the time they were sold to the museum. The Common Prayer Book of 1552 stipulated a radical break from the past, visually expressed through the priest using no vestment for Mass but rather a simple surplice. Practices varied in different parts of the country, many vestments survived in use, or were converted to other uses (e.g. as altar cloths); some were reinstated with the accession to the throne of Mary I in 1554 (Eamon Duffy. The Stripping of the Altars. Traditional Religion in England 1400-1580. Yale, 1992, p. 473, 492-3, 547)

Based on the type and style of embroidery.

Attribution note: Most ecclesiastical vestments were commissioned for a particular church or clergyman, although their designs are not necessarily unique. The coat of arms on this piece suggests that it was probably made for a church whose patron was Sir William de Clinton, 1st Earl of Huntingdon. He married Juliana de Leyburne in 1329 and one of the other pieces of the orphrey bears her coat of arms (806-1902).
Reason For Production: Commission 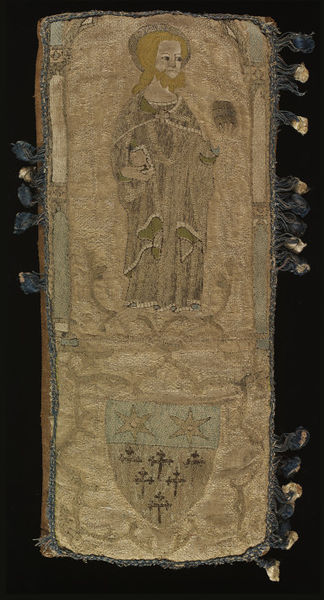