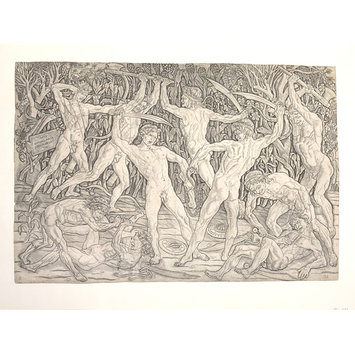 Battle of the Nudes (2nd state)

This fifteenth-century engraving of ten naked men fighting is one of the largest and most influential prints made in the Renaissance. A variety of weapons are depicted: bows and arrows, swords, daggers, axes and a heavy chain. Two shields, one face up, one face down, are lying on the ground.

The subject of this print is an enigma. What historical period is being depicted, who are these men, why are they fighting, and why are they nude? Does the print illustrate a philosophical idea or a text from ancient Rome or Greece?

Various authors have proposed different answers to these questions because there is no documentary evidence dating from the time the print was made that can provide a definitive answer. Some experts believe the artist made this print as a demonstration of his own skill at depicting the male nude which could then be copied by other artists and in other media.

What cannot be disputed is that this print depicts brazen male nudity and murderous aggression. There is a strong emphasis on contour. Some pairs of figures mirror each other, most noticeably the two figures in the centre clutching the chain. Aggression is communicated through the men’s dynamic poses as well as their facial expressions.

This is the first engraving in Europe to include the artist’s full name and place of origin (in Latin) on the sign hanging from the broken tree branch on the left. Pollaiuolo was also a painter, sculptor, goldsmith and designer of embroideries and this is his only engraving.

Engraving on paper of a battle of nudes.

.OPVS.ANTONII.POLLAIOLI.FLORENTINI.
The work of the Florentine Antonio Pollaiuolo
Signature of the engraver in Latin on a tablet hanging from a tree stump on the left.

CAI in a circle stamped in red.
Mark of the collection of Constantine Alexander Ionides.

Anchor in a circle.
Watermark in the paper on which this engraving is printed.

NAL in a circle.
Stamp of the National Art Library.

Historical significance: This engraving has been interpreted as a sort of study sheet equvalent to a printed modelbook presenting a range of poses (and emotional expressions Manca p.28) that can be given to the aggressive male nude. (Emison note 1 and p.263) There have been various attempts to align the subject with classical or Renaissance texts (Emison note 2) or an actual historical incident (Emison note 27) but none of these has earned a consensus of support .

Emison, p.262, describes it as belonging to "the very inception of the tradition of the brazenly exposed adult male nude" and sees in the vine and the grain in the background a reference to the Eucharist, p.265. Emison, p.265, also sees this print as being about generalised, philosophical and theological belief about the conflict between the body and the soul, and the conquering of the body by the soul which is unfettered from its bodily prison in death.

Rather than being as some have suggested an all'antica image of struggle (Manca note 1), Manca proposes on the basis of on an analysis of the agricultural background and selection of weaponry, a moral reading of the image. He suggests that the signs of primitivism and barbarity in this print signal a setting at the very early or very late stages of antiquity, p. 32."Pollaiuolo reminds us that human vice is tied to very low level of economic and cultural existence." p.33. "...they could be Ostrogoths, Vandals, Thracians, or another barbaric tribe or rough, fringe culture from antiquity." p.34

Purchased by Ionides in 1882, with a group of prints by Mantegna from the dealer Goupil for £75

Battle of the Nudes, engraving by Pollaiuolo,1467-70

STUDIES OF MALE NUDES IN COMBAT [Terracotta and print]

The Florentine painter Antoinio Pollaiuolo's interest in drawing the male nude in active poses, was shared by many Renaissance artist. Prints of his engravings [see Curator's Comments] were widely distributed across Italy and Northern Europe, as shown by the figures appearing in other works of art.

The terracotta relief [7598-1861] recalls elements of Pollaiuolo's engraving. It might reflect a bronze relief which Pollaiuolo was said to have made for export to Spain.

Inscribed [Lettered] in Latin, 'The work of the Florentine Antonio Pollaiuolo'

NOT SURE WHERE THIS TEXT COMES FROM
[Pollaiuolo was one of the leading artists in fifteenth-century Florence, a versatile painter, sculptor and goldsmith who worked in a wide variety of media. The battle of nude men is one of the largest and most technically accomplished engravings of the period. It demonstrates Pollaiuolo's skill in composition based on his knowledge of classical relief sculpture, as well as a precocious undertsanding of anatomy. Even in Ionides' day, the print was considered a rarity; although it is a rather late, worn impression, this was one of the prizes in his collection.] [May 2008]
Antonio Pollaiuolo 1429/33 -98
The Battle of Nude Men (also known as The Gladiators)
Probably late 1460s

This is one of the largest and most technically accomplished early Italian engravings. Even in Ionides’ day, it was a rarity. Although this is a rather late, worn impression, it was a prize of his collection. The complex scene shows Pollaiuolo’s skill in composition, acquired through a study of classical relief sculpture, and his unusually advanced understanding of anatomy. [] 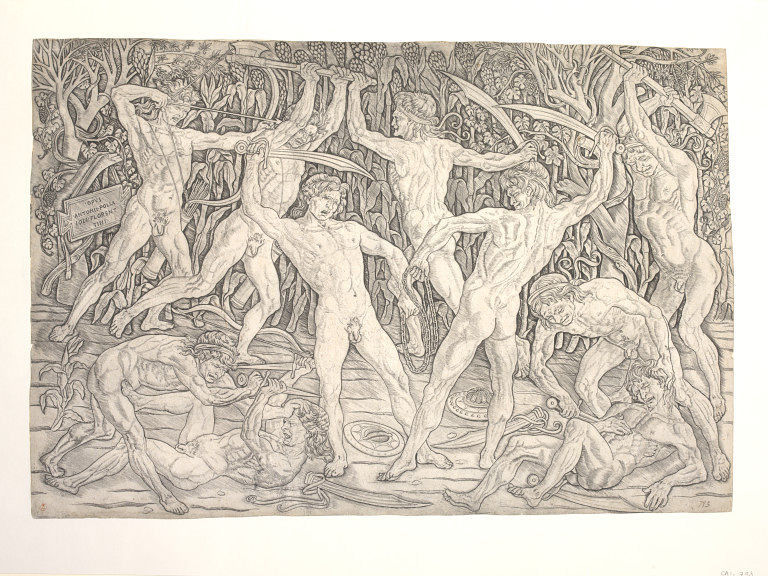