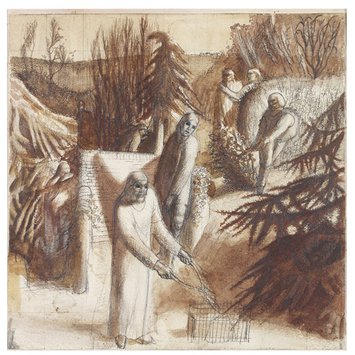 Study for 'Zacharias and Elizabeth'

At the Slade School of Fine Art in London, which he attended between 1908 and 1912, Stanley Spencer learned the principles of drawing. He was considered by Professor Henry Tonks to be among the greatest draughtsmen he had encountered. Spencer developed a highly individual style, historicist and modern at the same time, to express his eccentric vision. One critic commented, ‘It is as if a Pre-Raphaelite had shaken hands with a Cubist’.

This drawing is a preparatory study for the painting Zacharias and Elizabeth (1913).

Pencil and sepia wash study for 'Zacharias and Elizabeth'. Historical significance: A Study for the oil painting 'Zacharias and Elizabeth', 1914. The scene was painted from memory, of the view from the back window of the staircase landing on the second floor of 'Wisteria Cottage', looking towards Cliveden Woods. To this specific landscape Spencer added the biblical elements of St Luke Chapter 1, verses 5-21. Writing in 1959 he said: "Zacharias appears in the foreground of the altar. Sweeping down on him is an imagined angel. Further back among the grass and just by an old yew hedge Zacharias appears again with Elizabeth. Elizabeth has her arm crooked, and rests it on a tray-like frond of the yew. Her hand disappears into the tree. Behind the wall and to the left is a kneeling figure and above the wall in the top of the picture just by the sky is another head and shoulders of a figure. She is Elizabeth again, on her own, just as Zacharias is alone (with the angel) as he is making his sacrifice." The introduction of several versions of Zacharias and Elizabeth in the same work was probably inspired by the multiple narrative pictures of the early Italian masters, whom Spencer was studying at the time.

The story of Zechariah (or Zachariah) and Elizabeth comes about in the New Testament. They were seen to be "righteous before God, living blamelessly according to all the commandments and regulations of the Lord. (Luke 1:6)" The angel Gabriel greeted Zechariah, a priest in the temple in Jerusalem, announcing that Zechariah and Elizabeth would become parents of a son. Initially he didn't believe Gabriel because of their old age. For this, Zechariah became unable to speak.
After he was born, Elizabeth named their son John. As friends and relatives sought to change her mind, they asked Zechariah to write down what it should be. Suddenly, his voice returned and he confirmed his wife's choice. In response to receiving his son and his voice, he sang the Benedictus, a summary of God's Old Testament promises and a prediction of John's work as forerunner to Jesus (Luke 1:68-79). They are used as an example of faithfulness, piety and honor in Bibical study, and for raising St. John the Baptist.

Spencer portrayed religious subjects in the everyday setting of his village, Cookham in Berkshire. This study for an oil painting sets the parents of St John the Baptist in the garden of Wisteria Cottage, where the artist had a studio.

Pencil and sepia wash on paper 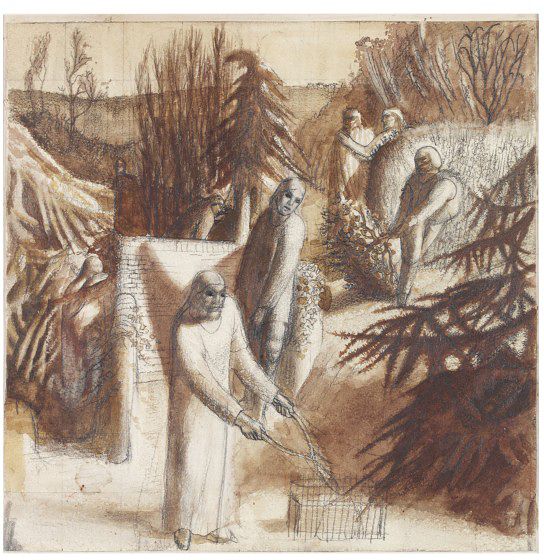