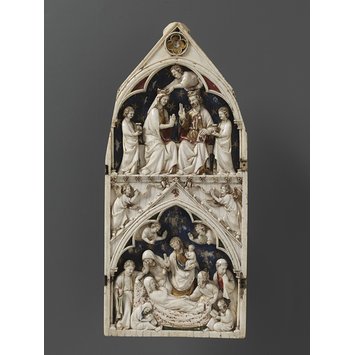 The Death and Coronation of the Virgin

This panel belongs to a group of triptychs, mostly of rather unusually large and elaborate form, dealing with the life of the Virgin. This ivory, which is of exceptionally fine quality, shows an individuality in composition which, though characteristic of the group, is rare in French 14th century ivories. Such ivory triptychs and diptychs made in this period, were of a portable size, and were often given as gifts; they became disseminated throughout the Christian world and helped to make the French gothic style international.
The Gothic Triptych was to all intents and purposes a sub-branch of the tabernacle polyptych, with a shallower central panel and two, rather than four, hinged wings. The subject matter was the same, dominated by single images of the standing Virgin and Child and scenes from the infancy of Christ. Triptychs – like diptychs – are better suited to the needs of a travelling clientele, who would wish to take these small portable altars with them as aids to prayer. Some of them were intended to be carried in cases, usually of cuir bouilli (boiled leather).

An ivory panel divided into two registers, divided by a rosette border. The bottom register contains the Death of the Virgin: She lies on a draped bier, wrapped in a shroud and with the outlines of her arms crossed in front of her chest showing through the cloth, with the figure of Christ standing behind holding the soul of the Virgin in the form of a tiny figure. Around are grouped six mourning apostles and above, two half-length figures of angels. The scene is enclosed by a wide cusped arch with a gable, in the spandrels are censing angels. There are considerable remains of colour, some of which is possibly original. The upper half of the relief, depicts the Coronation of the Virgin. Christ is seated on a long bench with the Virgin to the left ; an angel above places a crown on her head and two angels holding candlesticks stand on either side. A wide cusped arch supported on columns surmounts the scene.

Historical significance: This relief belongs to a group of triptychs, mostly of rather unusually large and elaborate form, dealing with the life of the Virgin. This ivory, which is of exceptionally fine quality, shows an individuality in composition which, though characteristic of this group, is rare in French 14th century ivories.
Ivory triptychs and diptychs made in this period were of a portable size, and were often given as gifts; they became disseminated throughout the Christian world and helped to make the new French art international.

Ivories such as this were carved by lay craftsmen and were largely intended for private devotion. The subjects of these devotional ivories were very limited, being almost entirely confined to the New Testament and its apocryphal additions. The most common narratives depicted are taken from the life of the Virgin or the Life and Passion of Christ. The popularity of these two subjects is evidenced in their endless repetition, which continued for over a century.

Neither the story of the death of the Virgin nor that of her subsequent coronation are related in the Bible. Both stories owe their existence to apocryphal literature some of which dates to the 4th century. The Golden Legend which appeared in the thirteenth century, at a time when popular devotion to the Virgin was especially intense, gives an extended account of the death of the Virgin based on earlier apocryphal works. Natanson proposes that the Master of the death of the Virgin based his depiction on the version of events found in the Golden Legend.
From uncertain begins in the fourth century, the cult of the Virgin gained momentum following the Council of Ephesus (431) and spread from the middle east via Constantinople (where she was the city's protectress) to become a central aspect of Christianity in western Europe by the twelfth century. The popularity of the cult triggered an outburst of Marian visual imagery in manuscript illumination, monumental and miniature sculpture and metalwork. Once the Assumption and Coronation of the Virgin had placed her firmly in the heavenly court, she was identified as a focus for prayer and as an intercessor for those who sought her protection for themselves and others.

Panel, ivory, central panel of a triptych, depicting the death and coronation of the Virgin, France (Paris), early 14th century

Th centre panel of a triptych. This relief belongs to a group of triptychs, mostly of large and elaborate form, with scenes from the life of the Virgin. The small figure on Christ's left arm in the lower scene represents the Soul of the Virgin. 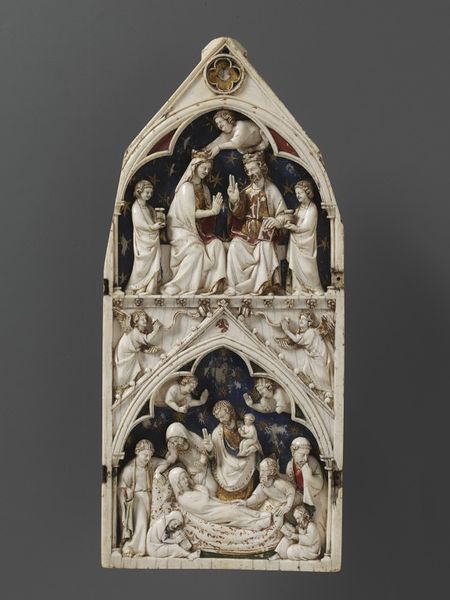