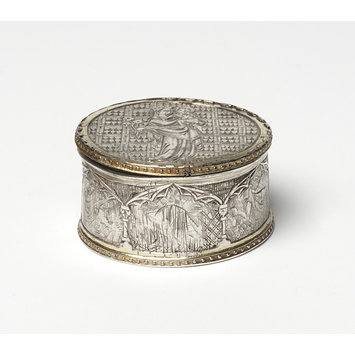 A Pyx (from the Greek pyxis meaning box) was used to contain the consecrated host. In the medieval period, wealthy people accumulated religious plate for their private chapels. This small pyx is one such example of a religious object made for private use.This pyx, decorated with scenes from the life of Christ, was originally entirely covered with bright translucent enamel.The imagery and style of these scenes are close to contemporary illuminated manuscripts. Not only is the pyx of very high quality, but it is the only surviving piece of its kind in silver and one of very few surviving pyxes from medieval England.

The Swinburne Pyx. A circular silver and silver-gilt container with a flat lid, fastened with a bayonet joint. All the engraved surfaces on the interior and exterior were formerly decorated with translucent enamel, of which minute fragments remain (black, blue, green, brown).Around the exterior of the container is engraved an arcade of six triple-cusped ogee arches, the area within each roughly scored, obliterating either simple drapery or more elaborate scenes. A gilt band of punched pellets decorates the base of the container and the rim of the lid.

Purchase from Mrs L.G. Swinburne, widow of the last of the Swinburnes of Capheaton, Northumberland, 1950.

Historical significance: This object is a good example of Gothic style. The architectural engraving upon the pyx and the naturalism of the figures are signs of a typically Gothic design. Basse taille enamel (known as translucent enamel) was a technique developed in the 13th and 14th century, at the height of the Gothic period.

In the medieval period, wealthy people accumulated religious plate for their private chapels. This pyx is probably one such example of a religious object for private use. The pyx was in the possession of the Swinburne family since medieval times and its small size indicates that it was most likely used in a private chapel.

The depiction of the Virgin upon this pyx is very like one in the Peterborough Psalter (Cambridge, Corpus Christi College, MS 53). The Nativity scene is very similar to the Cambridge University Library Book of Hours of Alice de Reydon. The goldsmith must therefore have had access to the same copy books as the illuminators of these manuscripts. The pyx therefore is a unique example of the close relationship between illuminators and goldsmiths in this period.

A Pyx (from the Greek pyxis meaning box) was used to contain the consecrated host. In the medieval period, it came in various forms, the most standard being a conical shape. Although silver was the preferred metal, other materials were also used, a practice noted by the English King Henry VII to his 'inward regret and displeasure'.

THE SWINBURNE PYX
Silver, parcel gilt, originally covered with translucent enamel
The design of the Virgin and Child and Nativity scenes is very similar to illuminations in two manuscripts made for East Anglican clients, now in Cambridge (University Library ms Dd.4.17 and Corpus Christi College ms 53). The pyx was long owned by the Swinburnes of Pontop, Co. Durham, for one of whose relations the Corpus Christi manuscript was originally made.
English; about 1325 [] 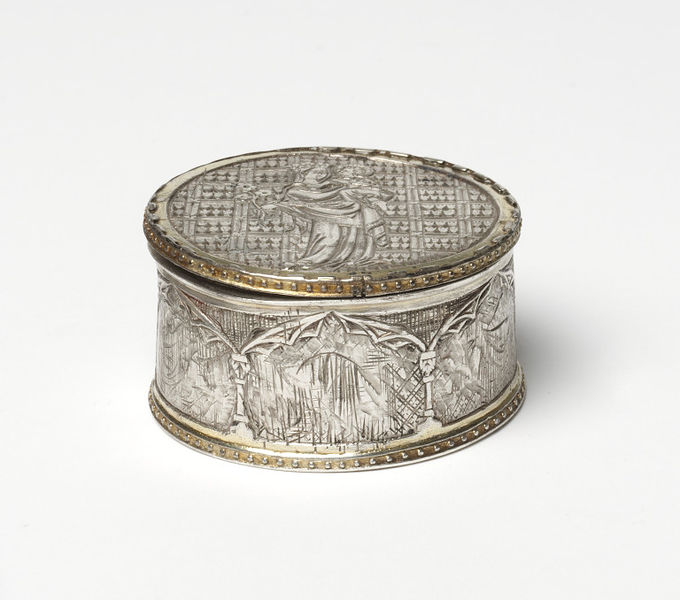