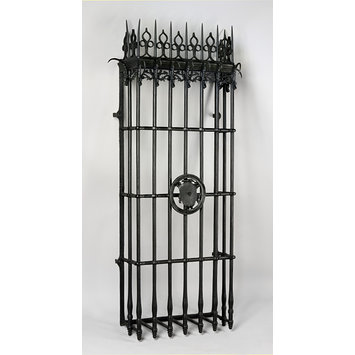 Window grilles were often found on public buildings such as Town Halls or Guildhalls. They demonstrated the important status of the building, as well as serving to protect the delicate window glass and ensure that no one could break into the building. The defensive purpose of this window grille is stressed through the prominence of sharp points, both in the form of the spikes interspersed between the fleur-de-lis cresting at the top of the grille and in the curved pointed tails of the salamanders. The choice of the salamander could be linked to its supposed ability to resist fire. According to medieval bestiaries the salamander was believed both to put out fires and to have the ability to survive the blaze without being burnt. This idea, coupled with the notion that the salamander was the strongest of all poisonous creatures meant that the salamander was the perfect choice of animal to protect the building through its inclusion on a window grille.

Bought from the Cathedral at Ghent for £2 12S

Historical significance: With the more widespread use of glass windows in the sixteenth century it became necessary to protect them and the property in general with objects such as window grilles, which in cases such as this could be decorative. During the sixteenth century it was common for ironwork objects to be found on public buildings in Flemish cities. In this example both elements of Gothic and Renaissance styles can be seen. The survival of such Gothic motifs as the fleur-de-lis cresting, and the presence of the salamanders suggest that blacksmiths were often slower to respond than other craftsmen to newer styles. However, the grotesque figures that appear in profile between each vertical baluster show that an attempt has been made to embrace the more classicising influences of the Renaissance.

A window grille such as this would be found on the exterior of a building. They were designed to act as a security measure, ensuring that glass windows would not be broken and preventing people from breaking into the building, and have been used to protect windows since the Middle Ages. Window grilles were often found to adorn public buildings such as Town Halls or Guildhalls. The most likely position for a window grille of this kind was on the windows nearest to the entrance, as it served to demonstrate the strength and importance of the building.

This style of window grille has been described as typically Flemish and similar examples can be found in situ at Nimeguen Town Hall, dating to 1574, and at Kampen. In addition, an engraving by Henri Causé shows the window grilles of the old Town Hall of Antwerp, before its demolition in 1564.

Gothic (the fleur-de-lys cresting and salamanders) and Renaissance (the paired grotesques) ornament is combined in this grille. It is typically Flemish; similar examples can be seen at Nimuegen Town Hall, dated 1574, and at Kampen. 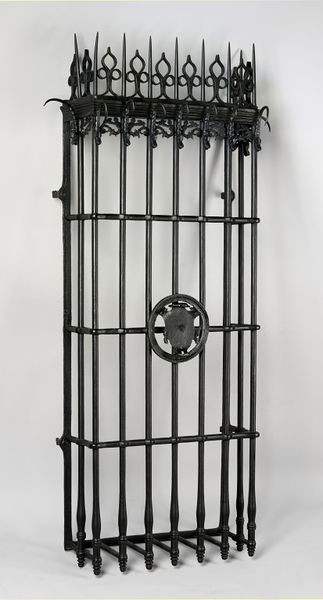