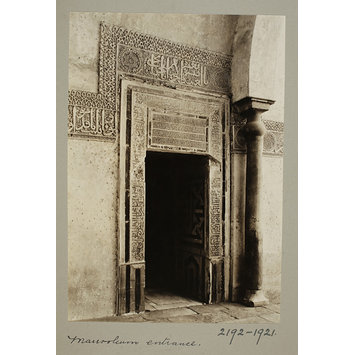 This is one of a large collection of architectural views acquired by the Victoria and Albert Museum National Art Library from Professor Sir K.A.C. Creswell (1879-1974) between 1921 and 1939. The majority of the views are of Cairo, but the collection also includes views of Syria, Palestine, Jordan, Iraq, Tunisia and Turkey. Creswell is considered the eminent pioneer in the scholarship of medieval Islamic architectural history. His two monumental publications, Early Muslim Architecture (vol. I, 1932 & vol. II, 1940) and Muslim Architecture of Egypt (vol. I, 1952 & vol. II, 1959) are the core of any good library on Islamic culture and remain today basic research tools in the field of medieval Islamic architecture.
Creswell has been credited with bringing a level of scholarship and quality to the field. Prior to his work, archaeological fieldwork consisted of drawing a reconstruction of the original plan of a monument. Creswell considered photography an essential part of recording the physical evidence. He took and printed his own photographs and paid attention to their quality. The fieldwork Creswell undertook for his books was most likely the source of the photographs that he sold to the Museum. Though, Creswell started taking his own photographs at least as early as 1916, as they were published and credited to him in a 1917 guide-book to Cairo’s monuments written by Henriette Devonshire. A few of the V&A’s views overlap with those published in her guide. Therefore, all the photographs received in 1921 have been dated: 1916-1921.
Some of the buildings which Creswell photographed have since been demolished, destroyed or looted. Others have been significantly altered with restoration or rehabilitation. These photographs therefore provide an invaluable record for those interested in the history of the major monuments of the Islamic Middle East.

The first record of correspondence between the scholar K.A.C. Creswell (1879-1974) and the Victoria and Albert Museum dates from 15 February 1916. It relates to an article he presented to the Museum’s National Art Library 'The History and Evolution of the Dome in Persia', which he published in the Journal of the Royal Asiatic Society in 1914. Four years later, Creswell approached the Museum and offered ‘a complete set of [photographic] prints on Velox paper, with titles and particulars written on the back’. In a letter dated 12 September 1920, two months after he was demobilized from the Army - having served in Egypt, Syria, Jordan and Palestine– Creswell wrote to G.H. Palmer of the Museum's Art Library offering a set of about 2,600 architectural photographs of Islamic architecture in Egypt, Syria, Palestine and Constantinople. Included with the correspondence were sixteen specimen photographs.
Regarding the prints from Egypt, Creswell added the following in his letter to Palmer: ‘This collection consists of a systematic series of photographs, illustrating practically every monument from the commencement of the Muhammadan period, down to 1650 A.D. every façade, entrance doorway, interior, mihrâb, dome, pendentive and minaret being illustrated.’ 1
Creswell was known to collect photographs by other photographers. According to the historian Ritchie Thomas, the Armenian photographer Gabriel Lekegian - whose studio in Cairo occupied a very prominent position in the city - took many photographs for Creswell and considered him a ‘personal friend’. 2 As Creswell knew the Museum has been collecting views of the Middle East and Egypt since the 19th century, Creswell highlighted that: “This series was taken to supplement a large number of photographs the Museum had purchased from Lekegian, and will not duplicate the photographs in the S. Kens. Mus. many of which were taken by Lekegian”. Correspondence in the archive indicates that the prints presented to the Museum were taken by Creswell himself.
Noting Creswell's expertise in the subject and his 'special opportunities to take photographs', Palmer endorsed the purchase and the Library confirmed the order on 26 November 1920. This makes the V&A the first public collection to acquire Creswell's photographs.
Shortly after his offer to the V&A, Creswell departed for Cairo to begin his monumental book project on the Muslim architecture under the patronage of King Fuad I of Egypt. This would explain Creswell's request to put on hold the use of the photographs pending the publication of his book as he writes: “My interest in the photographs is purely archaeological. I have no objection to full use being made of all the photographs from the first, for purpose of design, whether of fabrics, wall papers or architecture, but I do not want anyone to write books or memoire on Muhammadan architecture on material which I have myself systematically collected. However after my work on Egyptian-Muhammadan architecture is published I would immediately withdraw my objection to any and every use being made of my Egyptian photographs which form about two-thirds of the whole collection.”
The order was sent to the V&A from Cairo beginning 14 January 1921. It was filled in fourteen batches and the last batch was received on 26 April 1921. This first order delivered totalled 2,612 photographs (not including the original sixteen specimens).
The relationship with the V&A continued throughout Creswell's lifetime and subsequent smaller acquisitions of photographs followed in 1926, 1927, 1929, 1930 and 1939. The Museum now holds in total 3,374 prints taken by Creswell with views from Egypt, Syria, Palestine, Jordan, Iraq, Tunisia and Turkey.
In 1931, Creswell gave a public lecture at the V&A which he boasted in a letter to his friend, the renowned art historian Bernard Berenson:
“At the V. and A. Museum there is seating accommodation [sic] for 550. At 5.10 there was standing room only, at 5.25 the doors were shut, and MacLagan [V&A Director, 1924-44] tells me that 150 were turned away! So I feel quite like a cinema star!”3
Creswell regularly gifted copies of his publications to the Museum and when in London, library records confirm that he was a frequent visitor to the National Art Library where he conducted research.
[1] Notes on photography collection included in letter from Creswell to G.H. Palmer 12 September 1920, V&A Archive of Architecture and Design AAD/MA/1/C3193.
[2] Richie Thomas, ‘Some 19th Century Photographers in Syria, Palestine and Egypt’, The History of Photography, 3, no. 2 (April 1979): 157-166.
[3] Letter from Creswell to Bernard Berenson 5 February 1931, The Berenson Archive, Villa I Tatti, The Harvard Center for Italian Renaissance Studies, Florence, Italy.

Survey of Egypt, Index to Map of Cairo showing Mohammedan monuments (Cairo, 1951) no.172

The glass negative for this photograph is in the Creswell Archive, held in the Ashmolean Museum, Oxford (EA.CA.4652) 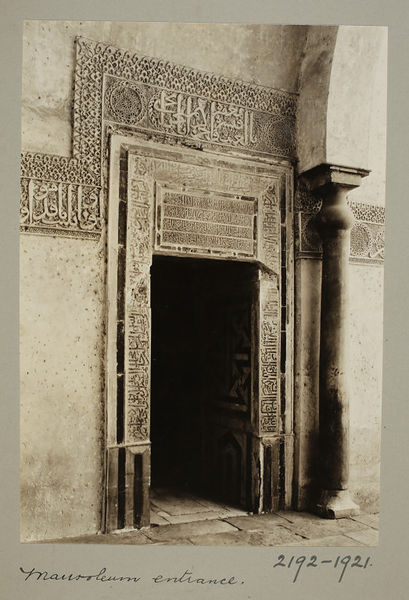