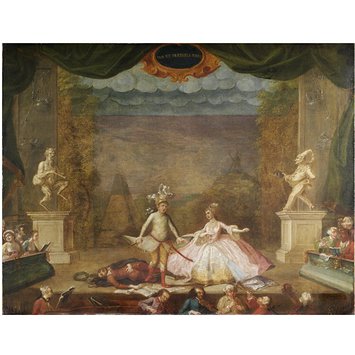 The Downfall of Shakespeare Represented on a Modern Stage

In the 18th century Drury Lane and Covent Garden were the only London theatres licensed to stage 'legitimate' drama. The popular Italian opera was the province of the King's Theatre in the Haymarket. Things changed in 1761 when the great English tenor, John Beard, took over the management of Covent Garden. He increased the number of opera performances, and those of Shakespeare fell.

Covent Garden was already well known for its pantomimes and the lack of serious drama was much criticised. Dawes's painting satirizes the situation. Shakespeare lies dead, stabbed by a elaborately dressed opera singer who tramples on pages of the plays. The statues of the muses which flanked the real Covent Garden stage have become a satyr mocking music and a Scaramouche figure representing pantomime. On the left side of the proscenium arch the scales show the crown and sceptre of tragic drama weighing less than musical instruments. In the scales on the right the works of English dramatists are outweighed by pantomime and 'The Favourite Song'.

The audience on the left has come to hear an opera. A serious young woman holds the libretto. Her friend is an adoring admirer of the hero. On their side of the stage the backdrop depicts the pyramid setting for the opera Artaxerxes. On the right it becomes a pantomime backdrop with a windmill. It is possible that the dark-skinned man in the pantomime audience is a member of a Cherokee delegation which visited England in 1762. His presence is not a compliment and implies that pantomime is only suitable for ignorant foreigners.

Above the stage hangs the motto, Vox et Praeterea Nihil: 'You're all voice and nothing else'.

Satirical representation of the stage of Covent Garden. Male and female opera singers in elaborate costumes stand centre stage with the corpse of the murdered Shakespeare at their feet. The male singer holds a knife and tramples on pages of Shakespeare's plays. On each side of the stage are statues, on the left a satyr playing bagpipes, on the right a Pulcinello or Punch figure. On either side of the proscenium arch are weighing scales. Behind is a backdrop showing a pyramid and a windmill. The audience includes a dark-skinned man and a young woman holding a libretto. Above the stage hangs the motto, Vox et Praeterea Nihil. Signed and dated

The painting was exhibited by the artist at the Free Society of Artists exhibition in March and April 1765. Nothing further is known until 1965 when it was acquired by Professor Allardyce Nicoll from the dealer Bonfiglioli who advertised it for sale in the Burlington Magazine of September 1965. In modern times it has been exhibited in the Royal Opera House Retrospective 1732-1982 in 1982/83 and An Extravagant and Irrational Entertainment": Staging Opera in England 1632-1792 in 1987.

'Mr Dawes' is known to be the artist of The Henpecked Husband which he offered for sale at the Free Society of Artists in 1767 and again in 1768. Iain Mackintosh, who has undertaken extensive research on Dawes and this painting, has been unable trace any other work by the artist, but quotes an anecdote attributed to George Michael Moser R.A. (fl.1760-1767), who describes a Mr Dawes as a pupil of Hogarth. Elizabeth Einberg (Walpole Society Journal, volume 63, 2001, p.116) suggests that Dawes was "an amateur artist of independent means" and a friend of the artist, John Collett (ca.1725-1780).

Historical significance: Iain Mackintosh believes this to be the only satirical oil painting of the 18th century relating to the theatre (Theatre Notebook, 2007).

The painting satirizes the London theatre, particularly Covent Garden, for pandering to popular taste and staging opera, panomime and lightweight fare in place of Shakespeare and the English dramatists.

The Downfall of Shakespeare represented on a Modern Stage, attributed to William (or ?Philip) Dawes, ca.1763-65. Oil on canvas

Opera originated in mainland Europe and its popularity in 18th-century Britain was not welcomed by everyone. This painting satirises the London theatre, particularly Covent Garden, for pandering to popular taste and staging Italian opera and pantomime in place of English drama. The dead body in the centre represents Shakespeare. 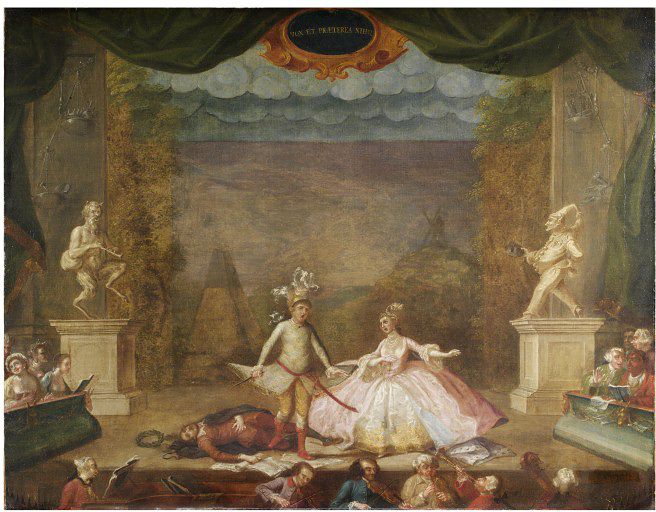