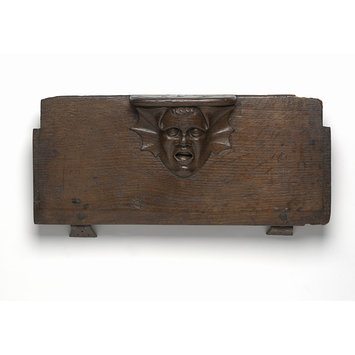 The term 'misericord' is derived from the Latin word for 'mercy'. These wooden brackets were carved on the underside of choir-stalls, so that when the seat was folded away, they offered a discreet support to the standing monks during long services. They were often carved with worldly subjects but even these could have a moralising undertone.

While the imp-like mask on this misericord could be one of the Devil's attendants, it is more likely that it represents a damned soul, who, with his bat's ears, has been horribly disfigured as punishment for some sin. Carvers frequently gave their human subjects animal features, to symbolise man's animal nature and his predisposition to sin. As if to signify the sinner's eternal torment, the carver has trapped this man forever in the oak misericord, where he is imprisoned by the ledge of the seat over his head. The figure communicates the weight of his suffering to the viewer with a silent scream.

Rectangular oak board with a narrow, rounded bracket in the centre, that serves as the seat. Beneath the bracket is a carved grotesque mask of a man's head. The mask grimaces and bares its teeth in an aggressive manner, as if to frighten or to indicate a state of pain or torment. Bat's wings have been substituted for the mask's ears. There are two iron hinges on either side of the bottom of the board.

'.A.V.I'
Carved inscription on the top of the ledge.

This misericord, along with seventeen others, were presented to the museum in 1910 by J.H. Fitzhenry, who had bought them from Sir Edward Barry, Bt. of Ockwells Manor, Berkshire. Barry had acquired them from Fenton & Sons of 11 New Oxford St., who in turn had bought them at a sale in 1902 at Kelmarsh Hall, Northampton. The accession register documents the museum's attempts to trace the provenance of these objects. It was discovered that the misericords had been purchased by a Mr. R.C. Naylor of Kelmarsh Hall, with the intention of their furnishing either the hall chapel, or Kelmarsh Church, which had been restored and partially rebuilt by Naylor in 1874. Ultimately neither course of action was taken. Naylor's death resulted in the misericords being sold in the 1902 sale of his effects and subsequently all traces of their provenance were wiped out.

The scholar, J.A.J.M. Verspaandonk, has proposed that these misericords may have been the work of a Belgian craftsman, Claes de Bruyn, who was active during 1438-1441 (see Verspaandonk, J.A.J.M. ‘Laatgotische Zuidnederlandse misericorden in het Victoria & Albert Museum to London’, in Antiek, June/July, 1986:12-21.).

The seventeen other misericords in this group depict a variety of subjects including: two figures in jesters' costume dancing; a boy yawning; grotesque male heads; a pelican in her piety; an owl; dragons and other birds and beasts.

Continental misericords, such as this one, are distinguished from their English counterparts by the absence of carved supporters on either side of the bracket.

'Misericord' is the name given to the ledge supported by a corbel which is revealed when the hinged seats in medieval choir stalls are tipped up. The word comes from the Latin misericordia which means pity and alludes to the original function of the ledge.

The rule of St Benedict, introduced in the sixth century AD, required the monks to sing the eight daily offices of the Church (Matins, Lauds, Prime, Terce, Sext, Nones, Vespers and Compline) standing up. They were only permitted to sit during the Epistle and Gradual at Mass and the Response at Vespers. Such long hours spent standing was particularly arduous for the older and weaker monks and they soon adopted a leaning staff or crutch to help take the weight off their feet.

By the eleventh century the rules were slightly relaxed and misericords were introduced – the monks were able to perch on the ledge and lean back slightly, taking much of the weight off their feet whilst still giving the appearance of standing up straight. They were in use wherever the monks were required to sing the daily offices, including cathedrals, abbeys and collegiate churches. They sometimes even appeared in Parish churches.

The earliest mention of misericords appears in the eleventh century in the rules of the monastery of Hirsau in Germany. It is not known when they were introduced in Britain but the earliest surviving examples are found at Hemingbrough in North Yorkshire and Christchurch in Dorset. Both date from the early thirteenth century. The earliest complete set of misericords is in Exeter Cathedral and dates from 1240 to 1270.

The choir seat, the ledge and the corbel supporting it were made of a single piece of wood, usually oak. The corbel provided an ideal platform for medieval craftsmen to carve all manner of narrative scenes and decoration. British misericords differ from those elsewhere in Europe by having subsidiary carvings on either side of the central corbel. These are known as supporters and are often used to develop the theme introduced in the carving of the corbel.

Over half of the misericords in Britain are decorated with foliage but of those which do have narrative decoration, both in Britain and on the Continent, very few depict religious subjects. More common themes included scenes of everyday life and moral tales, often being depicted in a humerous way.

Whether, as has been suggested, the lack of religious scenes was because the hidden location of the misericords meant craftsmen were more free to be creative with their carving, or whether the monks would have thought it inappropriate to sit on images of Christ, Saints or biblical scenes is not known. However, their lack of overt religious content together with their concealed physical position probably contributed to a large number of them surviving the Reformation and still existing today.

Misericord with a male head with bat's wings for ears 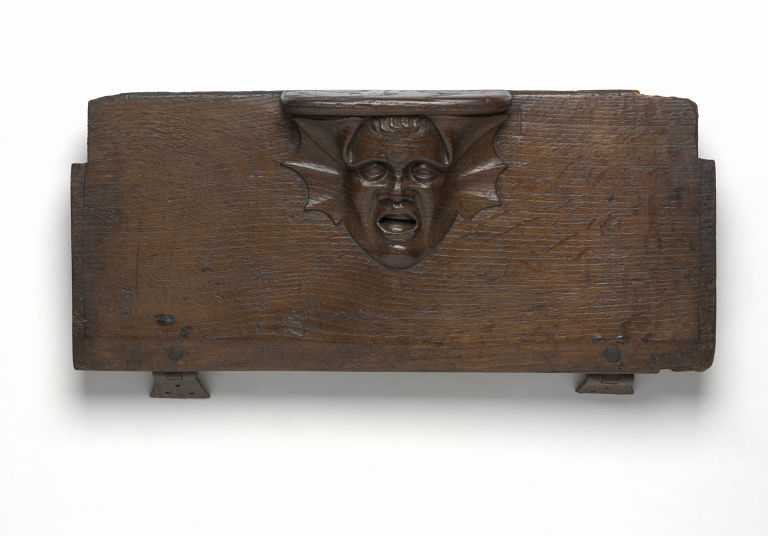