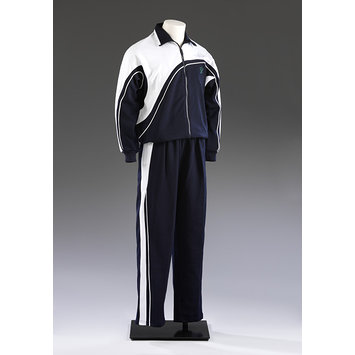 Shenzhen school uniform, 2013 collected on the occasion of the exhibition V&A in Shenzhen: Rapid Response Collecting, staged at the 5th Bi-city Biennale of Urbanism and Architecture, The Value Factory, Shenzhen, China.

The Shenzhen school uniform (unisex high school winter sportswear uniform) like those worn by every secondary school student in the city. The standardised clothing design was introduced so that students can identify each other and prevents schools from profiteering by charging their students for institution- specific uniforms. The V&A example was bought in the Luohu district of Shenzhen where many of the best high schools are located.

Shenzhen, China’s first special Economic Zone is located at the tip of the Pearl River Delta. The city grew from a modest fishing town into a vast, sprawling metropolis of more than fifteen million in just thirty-five years, through manufacturing, trade and relentless commercial energy. Today Shenzhen is the world’s third busiest container port, with a population with an average age of the less than thirty and almost entirely composed of recent migrants.

The invitation to participate in the Bi-City Biennale enabled the museum to engage with this fast-changing city and to road test the recently introduced Rapid Response Collecting strand. The museum asked more than sixty people in Shenzhen to propose a design object that told a story about their city and the result was an exhibition of twenty-three things and twenty-three stories about the place. By exhibiting everyday objects, the show placed centre stage the realities of urban life, of industry and of commercial and social change.

The Shenzhen uniform was suggested by Feby Ting a student from the city. Feby Ting noted that there is considerable pride among Shenzhen students in this comfortable, practical piece of clothing. Many continue to wear it after graduation and this allows then to recognise other former Shenzhen students when living in cities elsewhere in China and abroad. The very simple design has become an object of communal experience and belonging for a generation educated in a city often criticised, even by its own inhabitants, for having no identity.

In recent years, the Shenzhen school uniform has entered popular cultural consciousness: manga stories have featured it and themed events, like the Shenzhen School Uniform Day, celebrate its significance.

Shenzhen high school uniform, the trousers are dark blue with a white strip done the outside of each leg. The top is dark blue at the bottom and white at the top with a dark blue collar, the tope zips up through the middle front.

Every secondary school student in Shenzhen wears these same trousers to school as uniform, a piece of standardised clothing design that allows students to identify each other and prevents schools from profiteering by charging their students for different uniforms. Feby Ting, a student from Shenzhen who chose these trousers, says that there is considerable pride among Shenzhen students in this comfortable, practical piece of clothing, to the extent that many continue to wear them after graduation. This allows them to recognise other former Shenzhen students when living in other cities.
Feby has his own experience of exactly this. More recently the Shenzhen school uniform has entered popular cultural consciousness: manga stories have featured it and themed events, like the Shenzhen School Uniform Day, celebrate its significance.
Suggested by Feby Ting, student [2013]
Shenzhen school uniform trousers
2013
These trousers were bought in Luohu district where many of the best high schools in Shenzhen are located. [2013] 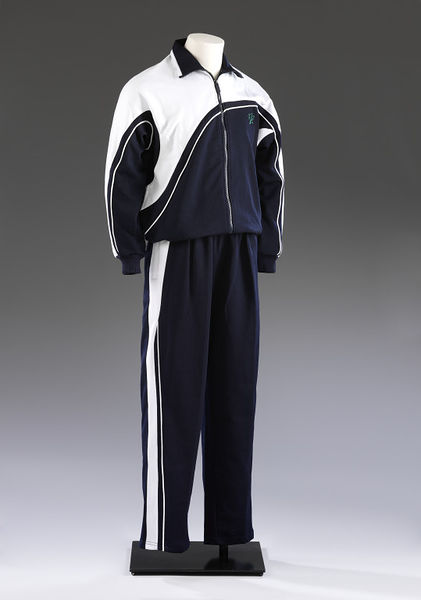