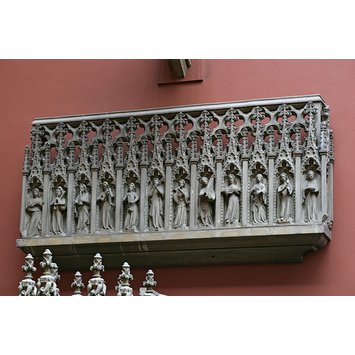 Copy of a Minstrel Gallery

Choirs or musicians would have performed at Exeter Cathedral from the original 14th-century minstrel gallery. The gallery is decorated with 12 angel musicians playing different instruments, including the bagpipes, a trumpet and cymbals. Although the original gallery is colourfully painted, the cast, made in the 1860s, was painted grey. This could be because the Museum wanted to demonstrate form over colour in the cast.

Plaster cast of a Minstrel Gallery depicting 12 angel musicians playing different instruments, including the bagpipes, a trumpet and cymbals. Although the original is colourfully painted, the cast is painted grey. This could be because the Museum wanted to demonstarte form over colour in the cast.

Exeter (Copy, made)
Exeter (Original, made)

Cast of a Minstrel Gallery created in plaster in Exeter about 1865, possibly by J. Gendall and purchased from Mr J. Gendall in 1865 for £90 7s. The cast shows 12 angel musicians playing different instruments. The original is sculpted by an unknown artist in Exeter about 1350-69 and is from the nave in Exeter Cathedral.

Plasetr cast of a Minstrel Gallery possible by J. Gendall in about 1865 depicting 12 angel musicians. The original was made by an unknown artist in about 1350-69.

Choirs or musicians would have performed at Exeter Cathedral from the original 14th-century minstrel gallery. The gallery is decorated with 12 angel musicians playing different instruments, including the bagpipes, a trumpet and cymbals. Although the original gallery is colourfully painted, the cast, made in the 1860s, was painted grey. This could be because the Museum wanted to demonstrate form over colour in the cast. 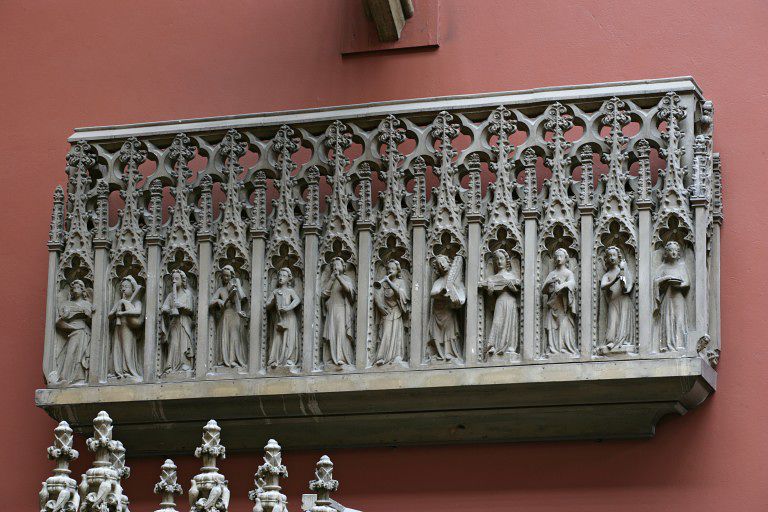