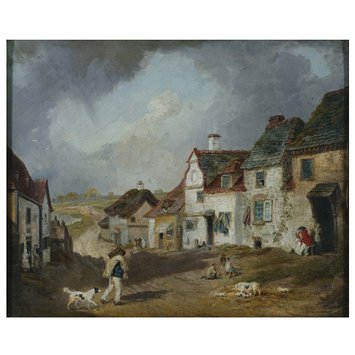 An oil painting depicting the village and coast of Pegwell Bay, near Ramsgate, Kent. Most of the panel is taken up by a view of the town's main street, with waves crashing against the cliffs at right.

Bequeathed by John Jones, 1882. John Jones (1800-1882) was born in or near London. He was apprenticed to a tailor and opened up his own shop in the West End in 1825. Following his retirement Jones lived at no.95 Piccadilly where he amassed his collection of fine and applied arts which he had begun collecting as a young man. As a collector Jones focussed mainly on French eighteenth century furniture, porcelain, sculpture and paintings. He left his collection to the South Kensington Museum and it was hailed as a major addition.

Historical significance: James Ward, animal painter and engraver (1769-1859). He first trained in his native London as an engraver under John Raphael Smith (1752-1812) and then with his brother William Ward (1766-1826). James Ward began working in oils in about 1790. These early paintings, depicting rustic scenes with figures, were strongly influenced by Ward's brother in law George Morland (1763-1804). In 1803 Ward saw the Rubens painting Autumn Landscape with a view of Het Steen (London, National Gallery), which had then been recently acquired by Sir George Beaumont. Seeing this painting had a strong effect on Ward and he began to paint scenes influenced by the style of Rubens. The artist also drew from Classical and Old Master works to create an eclectic style of art. In about 1810 Ward began working on portraits of thoroughbred horses. These works led to his being elected to the Royal Academy in 1811. During the 1810s and 1820s Ward also began painting landscapes with brooding overtones that followed the Sublime, an aesthetic then enjoying popularity in England. Although still a successful artist, Ward became increasingly disillusioned with the art world during the 1820s. In 1830 he retired to Cheshunt, Hertfordshire. He continued to exhibit at the Royal Academy following his retirement. In addition to being a prolific engraver, James Ward was regarded as the most important animal painter of his generation in England. His work is characterised by great animation, the sense of movement enforced by vigorous brushwork and strong colours; his compositions are generally set in sweeping landscapes with dramatic skies, a style influenced by Romanticism.

This painting depicts the main street of the hamlet at Pegwell Bay, Kent. The houses line the street, which curves down and then up in to the distant landscape. Each of the houses are of different styles and typical of the vernacular architecture of Kent. This brings variety to the composition. The scene is dotted with figures, including a woman wearing a red cloak sat by the porch of a house in the right corner and man, accompanied by a dog, carrying a sack over his shoulder as he walks to the right of the composition. In the foreground is a spotted sow and her litter of piglets. Just behind the sow is a group of children playing on the ground.

This type of bucolic scene is indebted to those being created at the time by Ward's brother in law George Morland. It was through exposure to the work of George Morland that Ward became interested in painting. Such rural scenes were enjoying popularity in the late eighteenth and early nineteenth century. While focusing on the rustic scene, Ward shows a perception for observing the behaviour of the animals in the painting. This interest was developed by the artist who eventually focussed on producing animal paintings.

In this work the paint has been applied in a very sketchy manner with loose thick brushstrokes. Ward is documented as painting directly on to an absorbing ground laid on to the bare canvas with pigments that he had mixed with turpentine to effectively merge the paint colours in the composition. He was fascinated with painting techniques and was particularly interested in trying to emulate that of Rubens. This led to the criticism in 1809 that his “pictures are full of merit; but that merit is much obscured by affectation. He seems to think it more important to paint like Rubens, than to paint like nature…” (See: Ackermann’s Repository of Fine Arts, Supplement Vol.I, 1809, p.490.)

This was the only painting by James Ward to enter the South Kensington Museums as part of the Jones Bequest in 1882. When The Jones Bequest was made in 1882, the South Kensington Museums already had four paintings by Ward in its collection. Three of these Pigs and a Donkey (FA.216), and Pigs (FA.217), and Chinese Sow (FA.218), given to the museum as part of the John Sheepshanks (1787-1863) collection in 1857. John Jones had focussed primarily on collecting European eighteenth-century decorative and fine arts. While Ward had been a successful painter of animals during his lifetime, his work fell out of popularity in the years following his death. The publication of Grundy’s monograph on Ward in 1909 and the presence of his works in collections such as that of John Jones suggest a growing interest in the artist at the end of the nineteenth-century.

Pegwell Bay is a shallow inlet in the English Channel at the estuary of the River Stour between Ramsgate and Sandwich in Kent. The first Saxons landed close to Pegwell Bay, at Ebsfleet in 449 AD, and the first Christian missionary, St. Augustine arrived over a century later in 597 AD. Pegwell Bay is known for its nature reserve containing many rare species. 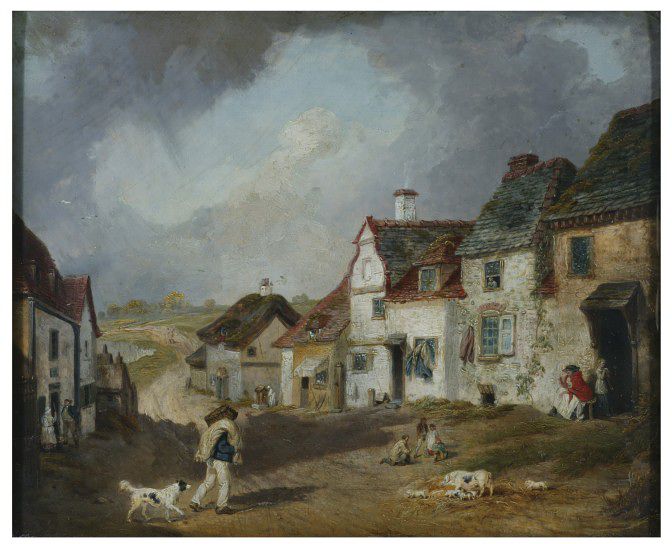