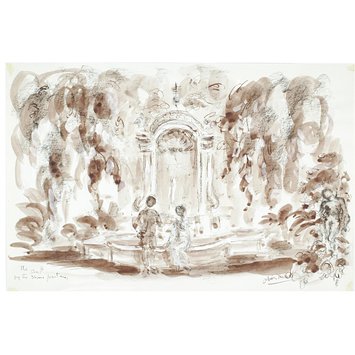 Messel designed costumes and sets for Joseph L. Mankiewicz’s film adaptation of Tennessee Williams's play Suddenly Last Summer (1959). The disturbing story about the mystery surrounding the death of Sebastian, the poet son of the rich, eccentric Mrs. Venable, gave Messel the opportunity to create a fantastic, exotic garden which contributed to the dark atmosphere of the film. It starred Elizabeth Taylor, Katharine Hepburn and Montgomery Clift, and was nominated for several Oscars, including two Oscars for Messel’s set designs.

Mrs. Venable tends the garden of her late son Sebastian. It forms a backdrop to key scenes, contributing to the unsettling atmosphere of the film. Messel achieved an exotic, strange look to the garden by using a mixture of natural and man-made materials.

Set design by Oliver Messel for a seat by the shrine fountain in a film production of Suddenly Last Summer, 1959.

'Oliver Messel'
Artist's signature in ink on the bottom right hand corner on the front of the sheet.

'The seat / by the shrine fountain.'
Ink inscription on the bottom right hand corner on the front of the sheet.

Suddenly Last Summer, a film directed by Joseph L. Mankiewicz with a screenplay by Gore Vidal from a play (1959) by Tennessee Williams. It featured Montgomery Clift as Dr. Cukrowicz, Katharine Hepburn as Violet Venable and Elizabeth Taylor as Catherine Holly. Messel was nominated for two Oscars for his set designs.

Lord Snowdon, Oliver Messel's nephew, inherited Messel's theatre designs and other designs and artefacts. The designs were briefly stored in a disused chapel in Kensington Palace before being housed at the V&A from 1981 on indefinite loan. The V&A Theatre Museum purchased the Oliver Messel collection from Lord Snowdon in 2005.

Set design for the seat by the shrine fountain by Oliver Messel in the film of Tennessee Williams's play Suddenly Last Summer, 1959. 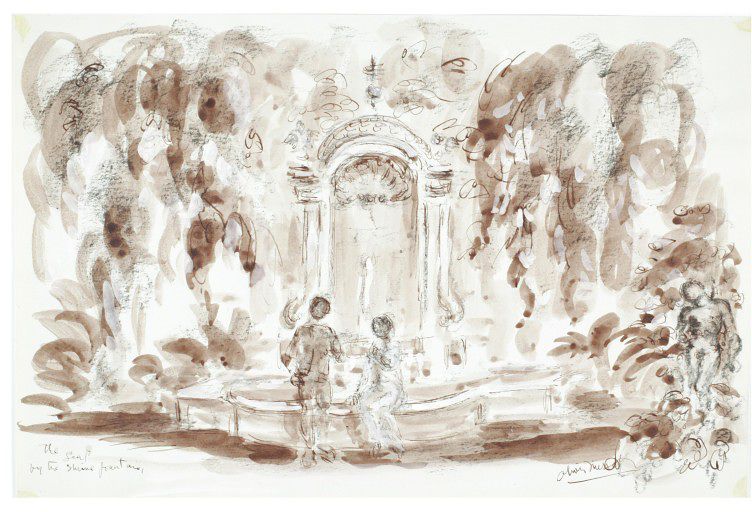