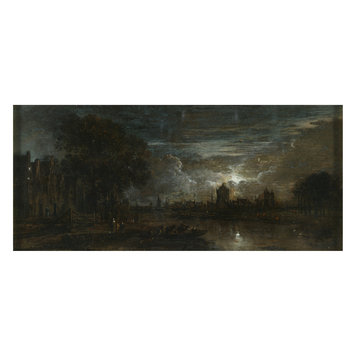 Aert van der Neer (1603/04-1677) spent his youth in Arkel near Gorinchem (Gorkum), a town on the river Waal, east of Dordrecht. He moved to Amsterdam in about 1632 and remained there for the rest of his life. He was best known for moonlight landscapes and winter scenes. The chronology of van der Neer's oeuvre is far from easy to determine however his earliest work seems to date from 1642 and the latest from 1665.

This painting is a good example of a contemporary imitation of Aert van der Neer's art that was much praised during his lifetime and is featured in the catalogue raisonné (Wolfgang Schulz, 2002) of the artist as a probable 17th-century imitation. Despite the monogram, AVN lower left, which lines look heavier than usual, this painting does not seem to be by Aert van der Neer himself: the tree's foliage is not as accurate as it usually is and the figures are hardly readable. Moreover the silhouette of the city view in the background is not as delineated as it should be. However the play of light, its reflection on water and the distribution of light and darkness are interesting and follow Aert van der Neer's essential characteristics. The sky is the source of light contrasted by dark browns and greyish blue tones with reddish-brown touches that are typical of Aert van der Neer's palette of the 1650s. Aert van der Neer was much imitated during his lifetime although the taste in Amsterdam changed in the second half of the 1660s. His production then decreased and he had further financial difficulties that led him to die in misery.

A ferry boat leaving a river bank by moonlight under a cloudy sky, with figures standing on the left river bank and view of a town in the background.

'Chauncey Hare Townshend (1798-1868) was born into a wealthy family, only son of Henry Hare Townsend of Busbridge Hall, Godalming, Surrey. Educated at Eton and Trinity Hall, Cambridge (BA 1821). Succeeded to the family estates 1827, when he added 'h' to the Townsend name. He had taken holy orders, but while he always referred to himself as 'Rev.' on the title pages of his books, he never practised his vocation... . Very much a dilettante in the eighteenth-century sense, he moved in the highest social and literary circles; a great friend of Charles Dickens (he was the dedicatee of Great Expectations) with whom he shared a fascination of mesmerism... Bulwer Lytton described his life's 'Beau-deal of happiness' as 'elegant rest, travel, lots of money - and he is always ill and melancholy'. Of the many watercolours and British and continental oil paintings he bequeathed to the V&A, the majority are landscapes. He is the first identifiable British collector of early photographs apart from the Prince Consort, particularly landscape photography, and also collected gems and geological specimens.'

Historical significance: This work was formerly catalogued as by van der Neer (1893 Catalogue, p. 183). Despite the monogram, 'AVN', lower left, whose lines appear as heavier than usual, it is listed as a 17th century imitation in the catalogue raisonné of Aert van der Neer (Wolfgang Schulz, 2002). The tree's foliage is not as accurate, the figures are hardly readable and the silhouette of the city in the background is not as delineated as is usual in the artist's authentic work. However the play of light, its reflection on the water, and the distribution of light and darkness correspond with Aert van der Neer's essential characteristics. The dark browns and greyish blue tones, with reddish-brown touches, are also typical of his palette of the 1650s. 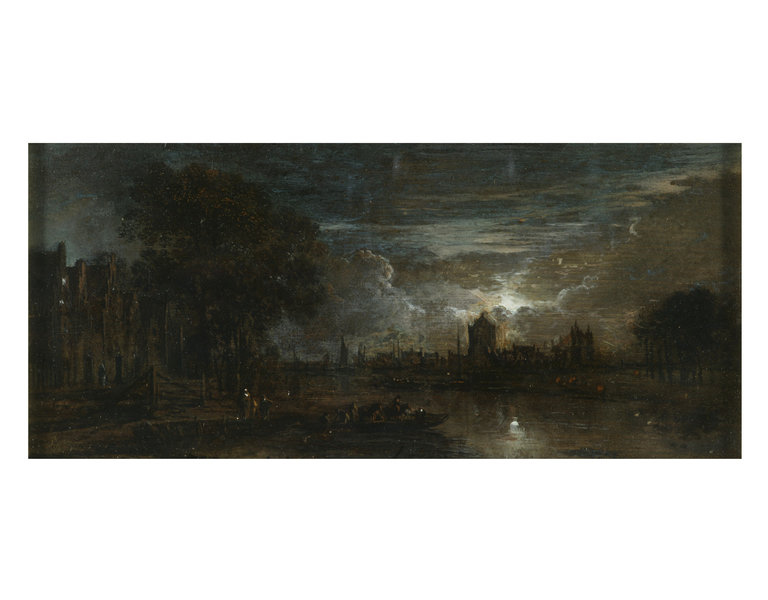