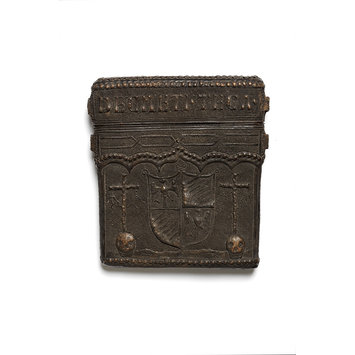 This document case bears the inscription DECRETI TECA, in Italian. 'case [for] decrees', and the arms of Bentivoglio of Bologna possibly of Antonio Galeazzo Bentivoglio, Pronotory Apostolic, Archdeacon of Bologna (1491-1511). It may have been used by the Archdeacon's official messenger.

The high value of personal possessions or official documents encouraged the use of protective cases of all shapes and sizes. These were moulded and stitched in leather, and were close-fitting and light-weight. They are exceptionally durable, and have often outlasted the contents. Integral loops allowed the lids to be secured with a cord or thong, by which smaller cases could be carried on a belt for convenience. They could be intricately decorated with fashionable ornament, personalised inscriptions or coats or arms, and sometimes colour.

Flat case for a document, of cut and embossed leather (cuir bouilli). It bears the inscription DECRETI TECA [Ital. case [for] decrees/laws], and the arms of Bentivoglio of Bologna possibly of Antonio Galeazzo Bentivoglio, Pronotory Apostolic, Archdeacon of Bologna (1491-1511). There are four loops for a cord to link case and lid, and by which the whole could be carried. The shield of arms in front is arranged between two crosses (each with knotted cords hanging from each arm) resting on skulls beneath an arcade in relief; a bone and jawbone lie on the ground adjacent. The back of the case and the cover are ornamented with a diaper pattern of lozenges, and bands of leaves, and the cover further decorated on the top with a wreath. The four loops are decorated with masks.

EDXRF analysis (October 2006) by Dr Lucia Burgio:
The white areas on the skulls on the front of the case were analysed non-destructively and in situ by EDXRF. No heavy metals could be detected, thus suggesting that no lead white, titanium white or zinc white was used to decorate the analysed areas.
The white surface of PR skull was analysed. No heavy metal could be detected, ruling out the presence of a traditional pigment such as lead white, or modern pigments such as zinc white and titanium white. It is possible that a white pigment such as calcite or gypsum was used, or that the white finish is the result of a surface treatment involving organic agents.

Notes on construction
An inner layer of hide was stitched down side and along bottom (the rough stitching is visible inside the lid)
A second layer of better quality was stitched like the first
A third layer of hide is again stitched
The outer layer was applied in sections, first a piece over the foot, then 3 horizontal bands, with feathered ends to conceal the joint.

The ornamental lid border seems to have been made with a needle inserted partially and lifted. 7 inexplicable holes near the neck of the body (at rear).
Latticework design.
A printed (red) label '1978' on the base.

The case bears the inscription DECRETI TECA [Ital. case [for] decrees/laws], and the arms of Bentivoglio of Bologna possibly of Antonio Galeazzo Bentivoglio, Pronotory Apostolic, Archdeacon of Bologna (1491-1511).

See also the entry by Alessandro Della Latta, (Museo Bagatti Valsecchi, tomo secondo, no.695) for a 15th century (north?) Italian case, 13cm x 14 x 1.8cm. Of which he says the type was made from the early 14th century and throughout the 15th. Thought to be a container for a document, or a devotional image (on the basis of the inscription AVE MARIA, AMA DIO). Probably made from 3 thicknesses of leather giving 5mm in total.

Case and lid for a document, of cut and embossed leather (cuir bouilli) 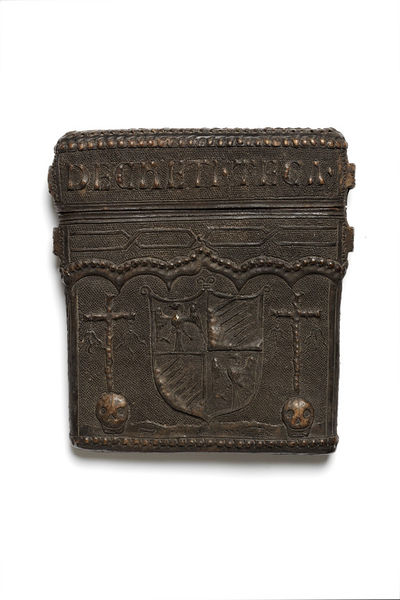