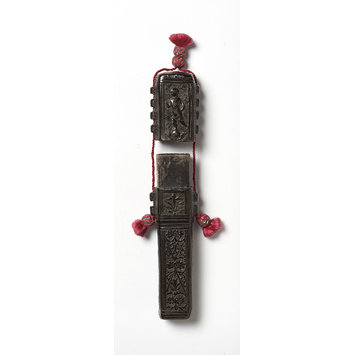 The French word 'Etui' in medieval inventories and accounts was a general term for storage or travel containers, of various materials and sizes. References are also made in inventories to small 'etui' of cuir bouilli (heated and moulded leather), which were designed specifically to be attached to one's costume. Used to carry quill pens, ink wells, books, cutlery, and other personal possessions, these objects are frequently depicted in 15th century paintings and manuscript illuminations.

Pen case and lid of moulded leather (cuir bouilli), cut and embossed with the youthful St John the Baptist with a reed cross standing on a skull on one side, and the figure of a naked boy on the other. The groundwork is decorated with floral ornament. On the end of the lid is a sunburst with mask, and a similar one (worn) under the foot. There are twelve loops integral to the case and cover, and a red silk cord with tassels linked case and lid. Two paper labels are pasted, '1212' [printed red numerals], and '22' [printed black numerals].

Linda Woolley (Textiles and Dress curator, V&A, c.2002) felt that cord and tassel were plausibly old, although the condition was suspiciously good.

Notes on construction
A stretched inner liner; the outer worked cover consists of a foot cover (stretch/shrink marks) and a wraparound section. One side of ornament seems less accomplished than the other.