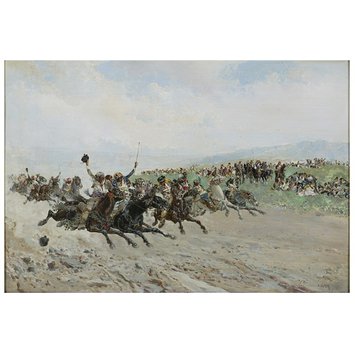 A Fair in Andalusia with Horse Racing

Baldomer Galofre Giménez (1849-1902) was born in Reus (Tarragona) and studied in Barcelona at the Fine Arts Academy of Lonja under Ramón Martí Alsina (1826-1894) and from 1870 in Madrid at the Real Academia of San Fernando. He was awarded a fellowship at the Spanish Academy in Rome where he moved in 1874. He worked in Rome, Naples and Venice before returning to Spain in 1884.

This painting is a fine example of Galofre's scenes of the quotidian, a category in which he specialised early in his career and improved over the years. The present painting shows a scene from a country fair in Andalusia with a race of horses in a plain bathed in an strong sunlight and colourful figures. The direct approach to reality and the intense rendering of light are characteristic of realist Spanish painting of the second half of the 19th century.

Racing horses on a plain with spectators in the middle distance and in the background mountains receding in the distance; the cavaliers wear colourful costumes and some of them hold sticks and hats.

'B. GALOFRE'
Signed by the artist, lower right

Historical significance: This work is a typical example of Galofre's later production, after his return from Italy, when he toured Spain to gather visual material for his uncompleted great project, 'Picturesque Spain'. This 'souvenir' of these travels shows an everyday Andalusian scene, a country fair with a horse race taking place. Two paintings of a similar subject, and identical dimensions, appeared recently on the art market (Sotheby's London, 22 Jun 2000, lot 36).

The horsemen are here wearing typical 'caballeros' costume, with a white shirt, coloured velvet suit and large-rimmed black hat over a colourful headscarf. Their large belts, made of colourful fabric, echo the decorated harness and saddles of their horses.The composition focuses on the rendering of movement. This work was singled out by Temple (1908) and in Thieme-Becker (1920) as one of this artist's best works.

Paintings of everyday life were popular from the 17th century in Spain, where Francisco Pacheco in his Arte de la pintura (1649) called the naturalistic genre scenes of Diego Velázquez (1599-1660) 'bodegones', from the name of a rough public eating-place ('bodegon' in modern Spanish means 'still-life'). The genre was further developed by Francisco de Goya (1746-1828). During the 19th century genre paintings emphasised social concerns, combined with a growing interest for the direct observation of nature and the rendering of light.

Baldomero Galofre y Gimenez (1849-1902) was born at Reus, Catalonia, studied at Barcelona and then from 1870 to 1873 in Madrid. In 1873 he obtained the Rome Prize of the Madrid Academy and spent the following year in Rome and Naples. From 1886 until his death in 1902 he again lived in Barcelona. Galofre enjoyed considerable public and critical success, partly through his partnership with the Parisian art dealer Adolphe Goupil, previously Fortuny's art dealer. He exhibited at the R. A. in London (from 1882) and also in Munich, Vienna and Berlin as well as in Spain, and enjoyed considerable fame as a naturalistic painter of Spanish genre scenes and festivals. His Andalusian scenes in particular were especially popular.

A characteristic feature of Galofre's work is the intense, bright light, a trend inherited from his master Ramón Martí Alsina (1826-1894), an early Catalan follower of Gustave Courbet, which became more emphasised after he encountered Mariano Fortuny y Marsal (1838-1874) in Rome. 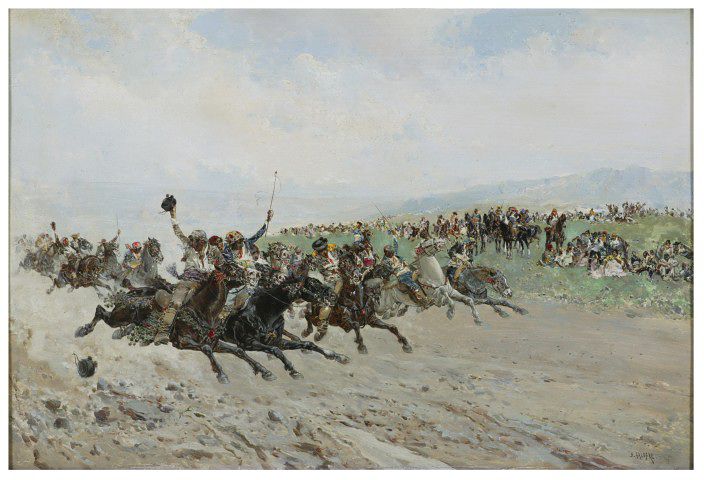