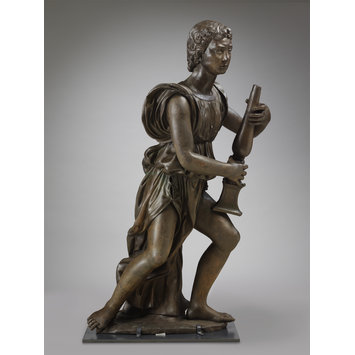 Candle-bearing angel stepping forward, knees slightly bent, portraying a sense of movement and energy, with short, wavy, unadorned hair and clothed in classical drapery gathered up at the back and falling to the base.

Henry VIII employed Benedetto da Rovezzano to complete his own tomb on an even grander scale. However by 1536, when the last recorded payment was made to Benedetto, its construction remained unfinished. His children intended to complete the memorial posthumously, but failed to do so. In 1565 Elizabeth I moved the tomb parts to Windsor. During the Civil War, Parliamentarians sold elements of the tomb to raise funds for the garrison at Windsor. The tomb chest was left and later reutilised for Admiral Nelson’s monument in St Paul’s Cathedral. Four large bronze candelabra, designed for the tomb of Henry VIII, were known to have been acquired by the Bishop of Ghent in the seventeenth century and remain in the Cathedral of St. Bavo in Ghent (a plaster cast of one of these is in the collection, Repro.1865-47).

The existence of all four angels remained unknown until two appeared in an auction in 1994 and catalogued as ‘A Pair of Large Bronze Angels in Italian Renaissance style’. These two were later ascribed to Benedetto da Rovezzano and associated with the Wolsey tomb by Renaissance scholar Francesco Caglioti. In 2008 the other two angels were discovered at Harrowden Hall, a country house in Northamptonshire. Although earlier estate and owners had important connections with the Tudor and Stuart monarchy, the current Hall was built between 1691 and 1719 and there is no known record of how or when the sculptures were acquired. Early twentieth century archive photographs record the angels,with wings, surmounting the gate pillars of the Hall. 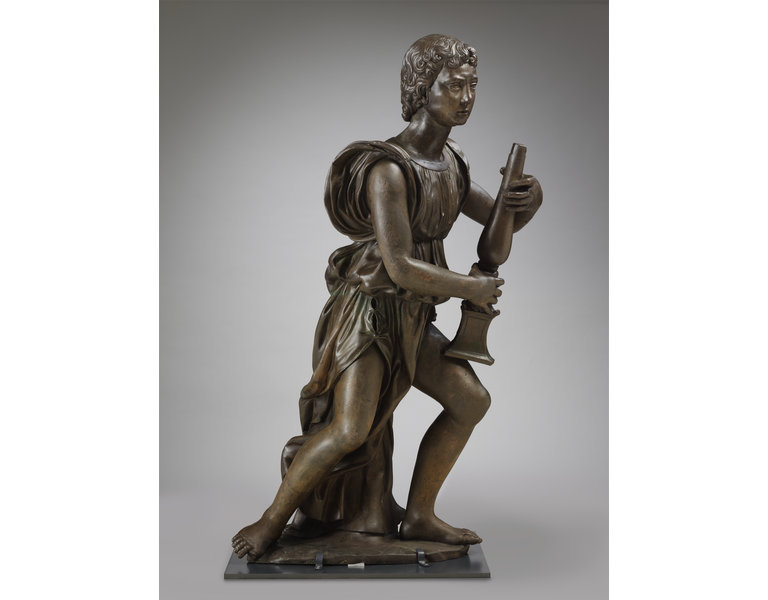