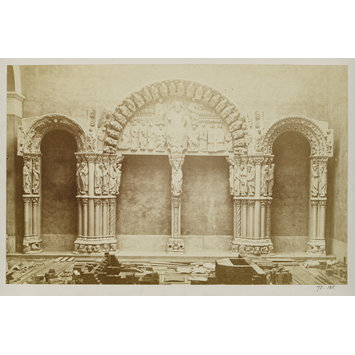 Sir Henry Cole, the visionary first director of the Museum, saw early on the potential of photography to dramatically extend the visual range of resources available to artists and students. In 1856 he appointed Charles Thurston Thompson as ‘Official Museum Photographer’ and the ‘first museum photographic service’ came into being.

Photographs such as these were originally collected by the National Art Library as part of a programme to record works of art, architecture and design in the interest of public education, these photographs were valued as records and as source material for students of architecture and design. As well as being crucial records of the history of the V&A, and an important element within the National Art Library's visual encyclopaedia, these photographs are also significant artefacts in the history of the art of photography.

With the sudden death of Thurston Thompson in 1868, his sister, Isabel Agnes Cowper, assumed his position, possibility the first woman to hold such a role. Little is known about Cowper, but in her letter of resignation in 1891, she refers to herself as the Museum's 'Official Photographer. Cowper held the post for twenty-three years retiring in 1891. According to census records, as early as 1871, Cowper, a young widow, lived in the Museum residences assigned to staff with her three young children.

With maternal responsibilities, and subject to the social restrictions applied to woman in the nineteenth century, Cowper's freedom to travel was limited. As such, unlike Thurston Thompson, whose duties included travelling abroad documenting great works of art and architecture on dedicated photographic campaigns, the majority of Cowper’s work involved documenting objects in the museum collection and loans on display. This is just one of the thousands of Museum objects Cowper photographed in her role as ‘Official Museum Photographer’.

A mounted sepia coloured photograph showing an intriquately carved archway featuring biblical persons installed in a museum gallery with installation and construction material scattered on floor in front of archway.

These images were previously attributed to Charles Thurston Thompson. But as per text in an album of photographs of the cathedral which includes a copy of this image: 'From their position in the portico, the Archivolt and Tympanum of the Central Doorway could not be satisfactorily photographed; Nos. 12,13, and 14 were therefore taken from the Casts in the South Kensington Museum', it is clear that these images were taken at a later date. An entry in the Photography Register from May 22, 1868 provides a clue to their origin: '3 mounted photos. Santiago, Cathedral. Porta della Gloria, photographed from the cast in the S.K.M. [South Kensington Museum] by Mrs. I. A. Cowper'. It is now clear these photographs were taken after Thompson's death by his successor as Official Photographer at the South Kensington Museum, Isabel Agnes Cowper.

Some casts were so spectacular they became almost as famous as the works from which they were copied. This image shows the cast of the Portico di Gloria in the process of being constructed. The photograph was taken by Isabel Agnes Cowper, the Museum's first female official photographer. In the foreground you can see building materials and tools. The width of the Courts was determined by the dimensions of this enormous cast. 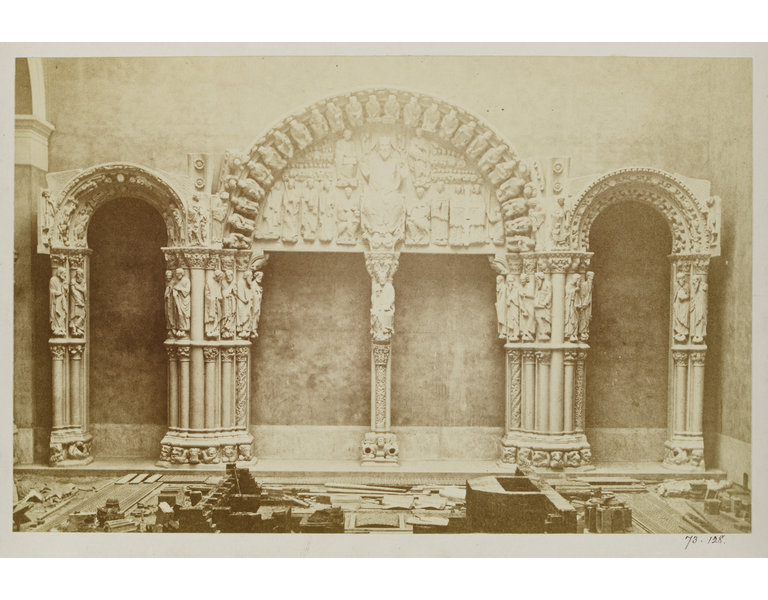