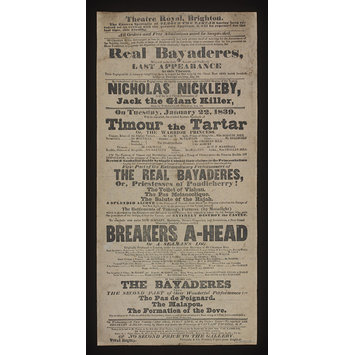 The Real Bayadères were a troupe of Indian Temple dancers or 'devadasis' from the town formerly known as Pondicherry, now Puducherry in south-east India, who caused a sensation when they were brought to Europe for eighteen months by the enterprising French impresario E.C. Tardivel, who is mentioned on this playbill as Monsieur Tardivel. The troupe, comprising Tille Ammal (aged 30) and the four dancers under her charge, Amany (aged 18), Ramgoun (aged 14), Saoundiroun (aged 13), and Veydoun (aged 6) arrived in France with their three male musicians at Bordeaux on 24 July 1838 and on August 19th performed before King Louis Phillipe and the French Royal family. Paris was already enamoured of the exotic east by travelogues and literature, and the opera Les Bayadères (1810) and the ballet Le Dieu at la Bayadère had both emerged in France.

Frederick Yates, the manager of London's Adelphi Theatre went to France to secure the dancers for 5,000 guineas for his 1838 season at the Adelphi Theatre where they gave 55 performances between October and December, as well as appearing at the Egyptian Hall in Piccadilly. In January they performed in Brighton before embarking on a European tour that included Germany, Austria and Belgium.

At the Adelphi Theatre Yates incorporated the troupe's dances within scenes in plays including The Widow of Malabar, and Arajoon, or, the Conquest of Mysore. At Brighton they were similarly worked into Timour the Tartar, or the Warrior Prince, the 'Eastern Spectacle' that included a troop of Tartars on horseback, and in Act ll of Breakers a-Head, or, a Seaman's Log.

letterpress and woodcut on paper, mounted on card backing

Names on the playbill include that of the manager of the Theatre Royal Brighton Mr. Charles Hill, who played a Rival Chieftain in Timour the Tartar, as well as Long Luke and Jane Jennings in Breakers a-Head which he also directed. Other performers in Timour the Tartarwere Mr. Lacy, Miss Rosalie Hill, Mr. Melville, Mr. Clifton, Mr. Bradford, Mr. Asbury, Mr. C.F. Marshall. Mr. Colwell, Mrs. Barnett, Mrs. Walton and Mrs. Charles Hill.

The dances advertised by The Real Bayadères were The Toilet of Vishnu, The Pas Melancolique, The Salute of the Rajah, The Pas de Poignard, The Malapou, and The Formation of the Dove, the dance involving a thity-five foot long scarf.

Tickets could be procured from Mr. Wiber, and Captain Pechell MP is also mentioned in connection with the patronage of Breakers a-Head.

Playbill advertising the final appearance of: 'the Real Bayadères, or Priestesses of Pondicherry' in the eastern spectacle Timour the Tartar, or the Warrior Princess, and the nautical drama Breakers a-Head, or, a Seaman's Log,at the Theatre Royal Brighton, 22 January 1839. The playbill also announces the withdrawal of Nicholas Nicklebyand the pantomime Jack the Giant Killer: 'in consequence of the above Engagement'. Letterpress. Printed by Phillips & Co., Brighton. Gift of the Palace Theatre Club, Westcliff. 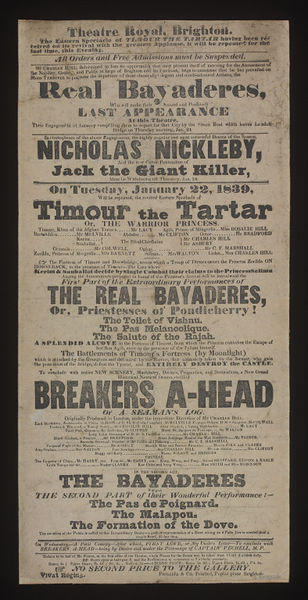