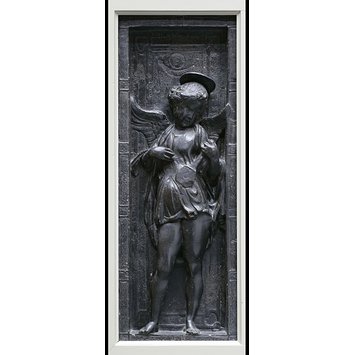 Plaster cast of an angel, one of a set of twelve by Donatello, 1447-9, from the High Altar of the Basilica di Sant'Antonio, Padua

Donatello may originally have conceived a design with only ten angels. On 27 April, 1447, he and his associates contracted for ten bronze angels and four Evangelists in the form of animals. The ten angels were already cast at this stage, but not yet polished and gilded. At this point Donatello suggested that a frame could be placed around them if so desired. On 30 June, 1449, Donatello was paid for casting the two remaining angels, and for having adorned the four Evangelists and twelve angels. The reliefs of the angels were placed around the sides of the altar: a payment for cornices in 1455 makes it clear that they were placed below the free-standing figures, on a level with the four reliefs of Miracles performed by St Anthony, and the symbols of the Evangelists.

The altar originally stood at the end of the choir, close to the ambulatory, but was dismembered in 1579, when officials of the Arca decided to replace it with a larger structure, designed by Girolamo Campagna and Cesare Fianco. Although most of Donatello's sculptures were incorporated into the new altar by 1582, it was not until 1895 that all the surviving components were united in the present fanciful reconstruction by Camillo Boito. The original form of the altar remains controversial, due to the loss of almost all the original architectural elements, except for a pair of volutes (item 8 below).
The surviving components of the original altar are:
Preserved on the altar in the Basilica di Sant'Antonio:
1.Seven bronze figures in the round, comprising, the Virgin and Child enthroned, St Francis (V&A cast no. 1899-56), St Anthony of Padua, St Louis of Toulouse, St Daniel, St Justina, St Prosdocimus.
2.Four bronze reliefs depicting miracles performed by St Anthony of Padua (V&A cast nos. 1884-325 to 328).
3.Four bronze reliefs containing Symbols of the Evangelists.
4.Twelve bronze reliefs of angels (V&A cast nos. 1870-18 and 18 a-k).
5.A bronze relief of the Dead Christ Lamented by Two Angels (V&A cast no. 1884-329).
6.A limestone relief depicting the Entombment.
7.A bronze relief of the Dead Christ with seven angels, by an unidentified Venetian sculptor (V&A cast No 1884-330)

In the Museo Antoniano, Padua:-
8.A pair of volutes, thought to have come from the canopy which once surmounted the altar.

In the Museo Salvatore, Romano, Florence:-
9.Marble reliefs depicting the half-length figures of St Prosdocimus and another saint, possibly two of the four half-length saints seen by Marcantonio Michiel on the back of the altar, in the early 16th century.

Plaster cast of an angel, one of a set of twelve by Donatello, 1447-9, from the High Altar of the Basilica di Sant'Antonio, Padua, cast by Signor R. Pinti, Italy, about 1870