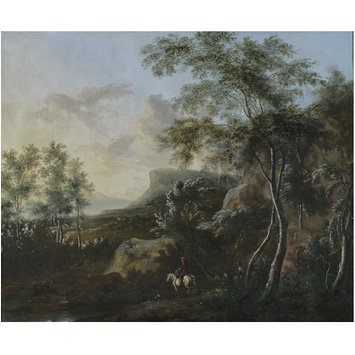 Frederick de Moucheron (1633-1686) trained with Jan Asselijn in Amsterdam and worked in France (Paris and Lyon) for several years before settling definitively in Amsterdam in the late 1650s. He belongs to the second generation of Dutch Italianates such as Nicolaes Berchem, Jan Both, Karel Dujardin or Jan Baptist Weenix and specialised in landscape painting reminiscent of his master's and Jan Both's work. His son, Isaac, trained with him and also become an important landscapist.

This painting is typical of Frederick de Moucheron's production and is a good example of Dutch Italianate landscapes of the mid century. These highly idealised classical landscapes such as the present one are structured upon artificial devices and proportionally small figures that enhance the sense of perspective. Similarly as in many de Moucheron's works, this composition shows picturesque and decorative qualities rendered attractively atmospheric by the use of silvery touches.

A rocky landscape with imposing trees, a hunter astride, a dog, a walking figure and cattle by a pond, mountains receding into distance.

Historical significance: This painting was originally catalogued as by Moucheron himself (1893 Catalogue), but was subsequently (1973) relegated to 'Probably an 18th century work, in the manner of Moucheron'. However, comparable signed works may be found in the Kunsthorisches Museum, Vienna (Inv. no. 425 and 428), the Rijksmuseum, Amsterdam (Inv. no. A280) and the Museum of Fine Arts, Budapest (inv. no. 1783).

Italianate landscapes were popular from the 17th century. The term conventionally refers to the school of Dutch painters and draughtsmen who were active in Rome in the 17th century. These mainly produced pastoral scenes bathed in warm southern light, set in an Italian, or specifically Roman, landscape. The term is also often applied, although wrongly, to artists who never left the northern Netherlands but who worked primarily in an Italianate style. The taste for such works continued undiminished into the 19th century.

The popularity of the hunt theme in Dutch landscapes grew during the 17th century, with artists often choosing to depict the preparations for or the return from the hunt, rather than the event itself.

Frederick de Moucheron was born in Emden. He was a pupil of Jan Asselyn in Amsterdam and worked in Paris for several years. He settled in Amsterdam in 1659 and appears to have lived there for most of the rest of his life. He painted landscapes, usually Italianate scenes reminiscent of Jan Both and Johannes Hackaert; the figures in them are often by other painters. He belonged to the second generation of Italianate Dutch landscapists, including Nicolaes Berchem, Karel Dujardin and Jan Baptist Weenix. An essential characteristic of de Moucheron's works is the sense of verticality emphasised by small figures contrasted with lavish vegetation. De Moucheron often used diagonal pictorial devices to enhance the sense of depth. His landscapes seem less naturalistic than those of the previous generation

Kauffmann, C.M., Catalogue of Foreign Paintings, I. Before 1800. London: Victoria and Albert Museum, 1973, p. 194, cat. no. 234.
A catalogue of the National Gallery of British Art at South Kensington with a supplement containing works by modern foreign artists and Old Masters, 1893, p. 182. 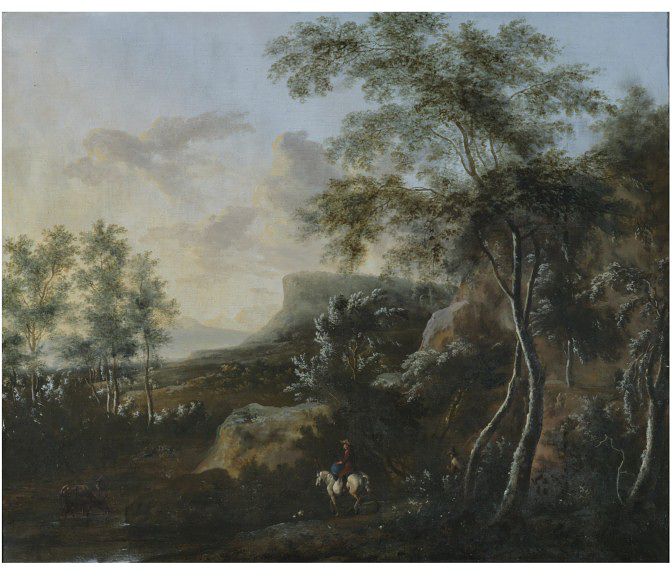