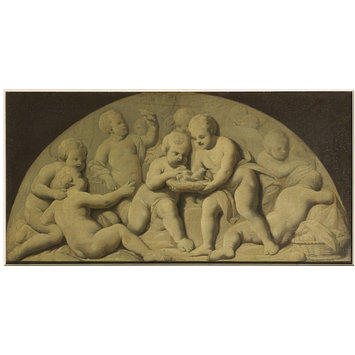 Group of putti, with birds

Piat-Joseph Sauvage (1744-1818) was a Flemish painter who trained at Antwerp under the supervision of J. Geraerts and G. van Spaendonk. He was in Paris by 1774 and enjoyed there a great success, specialising in trompe-l'oeil and grisaille paintings. He became a member of the Académie Royale in 1783.

This work is a typical example of Neo-classical decorative works fashionable at the end of the 18th century in Western Europe. It shows a group of putti playing with birds, a design that recalls classical low-reliefs. This type of paintings was particularly popular at the end of the Rococo period and the beginning of Neo-classical. Similar panel were used as overdoors or wall panellings set into lavish domestic interiors.

A group of putti in monochrome shade playing with birds.

Historical significance: This work, which imitates classical low-relief in its design and technique, is a fine example of the influence of classical designs discovered in Herculaneum and Pompei in the art of the second half of the 18th century. The production of such works marks somehow the transition between the rococo era and the Neo-Classicism.
The present painting presents a group of putti holding a nest with birds, a putto on the left holding a bird on his hand with his arm resting on a cage. Birds are usually a symbol for love, especially when put in a cage they represent the imprisoned heart of the lover.
This painting belongs to a group of four paintings (see 590-1882, 590B-1882 and 590C-1882) and probably originally formed a decorative scheme. The lunette-shaped indicates that the ensemble was inserted into an architectural setting.
Such imitations of stone sculpture, painted 'en grisaille' (in grey) are best known as 'witjes' (playing on the Dutch for white and the artist's name) because at this time, Jacob De Wit (1695-1754) was a leading specialist in this genre. Originally catalogued as 'French School, Manner of de Wit' (1893), this painting was probably made by one of the followers of the Flemish artist active in France Piat-Joseph Sauvage, who specialised in the production of 'witjes' in France. The museum owns two example of his art: 9120-1863 and E.1098-1911.

Grisaille is a term applied to monochrome painting carried out mostly in shades of grey. The use of the French word can be traced only to 1625, although grisaille painting was done in preceding centuries. The origin of monochrome figure painting is to be found in Italian wall painting such as Giotto's painted the stone-coloured allegories of the Virtues and Vices, conceived as statues facing each other in fictive niches on the walls of the nave in the Arena Chapel in Padua (1303-06). The allegories, subordinated by their stone quality to the coloured (and therefore more lifelike) figures in the scenes from the History of Salvation, have nonetheless the highest degree of reality within the picture programme because of their illusionist presentation.
Grisaille painting increasingly appeared in thematically or formally subordinated areas, however the explicit imitation of stone continued to play an important role. In the large fresco programmes of the 16th, 17th and 18th centuries grisaille helped to spread illusionism to painting in colour. Michelangelo's polychrome prophets and sibyls (1508-12) on the ceiling of the Sistine Chapel in Rome for example are placed between grisaille figures appearing like reliefs or caryatids on pilasters and are thrust by them into the beholder's space. The case is similar with Annibale Carracci's frescoes (1597-1600) of the Galleria of the Palazzo Farnese in Rome or Paolo Veronese's wall paintings (1561-2) in the Villa Barbaro in Maser. 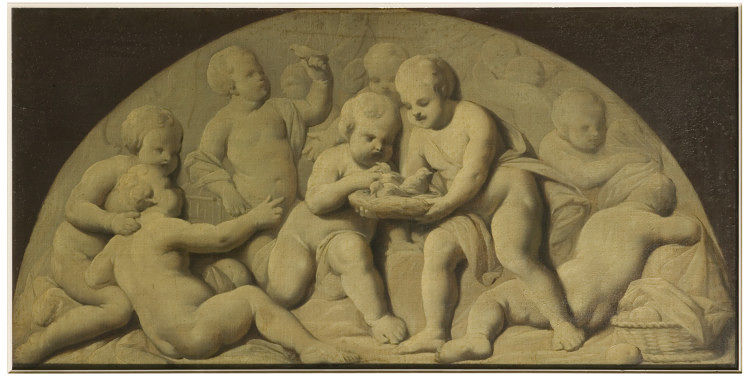