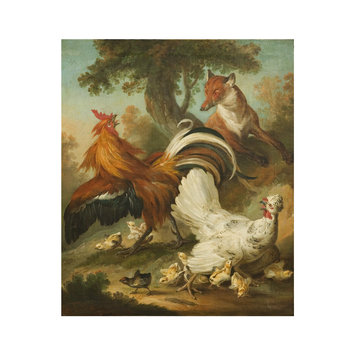 Cock, hen and chickens surprised by a fox

Jean-Baptiste Oudry (1686-1755) was born in Paris where he first studied with Michel Serres (1658-1733) and then for five years with Nicolas de Largillierre (1656-1746). He was received Master in the Académie de St-Luc in 1708 and worked mainly as a portrait painter but achieved a great success with his still-lifes and hunting scenes, a category in which he specialised slightly later. He received prestigious commissions from the King louis XV and important collectors. He ran a busy workshop and trained his son, Jacques-Charles, who imitated his father's style.

This painting was ascribed to Jean-Baptiste Oudry although it does not show Oudry's usual high quality of finish. This work may therefore be the work of his son, Jacques-Charles, about whom very little is known. This picture is a good example of animal paintings and hunting scenes fashionable during the second half of the 18th century in France.

An oil painting showing a cock, a hen and a brood of chicks scattering in fright as a fox leaps out from behind a tree.

second half of the 18th century (painted)

"Hondekoeter"
Label on back of stretcher.

Bequeathed by C. D. Rotch, 1962
Mr. C. D. Rotch, of Wimbledon, London, was a collector with a particular interest in furniture. Like other furniture collectors of the early 20th century he was influenced by the furniture connoisseur and dealer R.W. Symonds. Following the prevailing taste of the time, his collection focused on early to mid-Georgian carved mahogany examples and was later bequeathed to the Victoria and Albert Museum on his death in 1962 (see R.W. Symonds, 'Mr. C.D. Rotch's Collection of Furniture', Country Life, 7 June 1924, pp.937-39). At the time, his bequest was described by the authorities as "The most remarkable single gift of English Furniture ever presented to the Museum". The bequest also included just over twenty 17th, 18th and early 19th century portraits and figure studies, in pastel and in oil, as well as a selection of still lives and animal pictures.

Historical significance: Formerly attributed to the Dutch animal painter Melchior de Hondecoeter (1636-1695), this painting has been ascribed to Jean-Baptiste Oudry before entering the museum's collection (F. Watson, 1950s). It shows a fox attacking a cockerel, hen and chickens in a barnyard, a composition that recalls Fox in the Poultry Yard, dated 1748, in the Wallace collection, London (P629). The Wallace painting belonged to a set of overdoors showing animals' attacks. A drawing in the Louvre, Paris, showing a hen and its chickens pecking (RF 14972) as well as a black chalk study of a cockerel in the Indiana Museum of Art (1987.48) can be related to the present painting. However the slightly broad execution of this painting may reflects the work of Oudry's son, Jacques-Charles. Oudry's oil pictures are known for their highly finish look, demonstrating thus an aesthetic called 'le beau terminé'. This required finishing touches such as the delicate nuances of pelt and plumage in the glazes, which does not seem to appear here.
Oudry specialized in animal painting, responding to the demand of the market for still-lifes and hunting scenes. This trend coincided with the development of natural history in Europe. Between 1738 and 1753, the king's surgeon, La Peyronie, commissioned him to produce animal drawings to illustrate a work of natural history for the king's botanical garden.

Still-life and animal paintings reached the height of its popularity in Western Europe, especially in the Netherlands during the 17th century even though still-life subjects already existed in pre-Classical, Classical and Renaissance art. The term conventionally refers to works depicting an arrangement of diverse inanimate objects including fruits, flowers, shellfish, vessels and artefacts, while progressively including living animals. The fashion in many European cities and royal courts for menageries and aviaries filled with exotic and native species provided many 17th-century artists, particularly in the Low Countries, with subjects that they could paint from life. These paintings became increasingly popular as the taste for natural realism and detailed observation became more prevalent. Sometimes such subjects were 'posed' in conjunction with other objects in scenes depicting kitchens or markets; at other times they were portrayed in their natural environment.

Oil Painting, 'Cock, Hen and Chickens Surprised by a Fox', Ascribed to Jean-Baptiste Oudry, second half of the 18th century 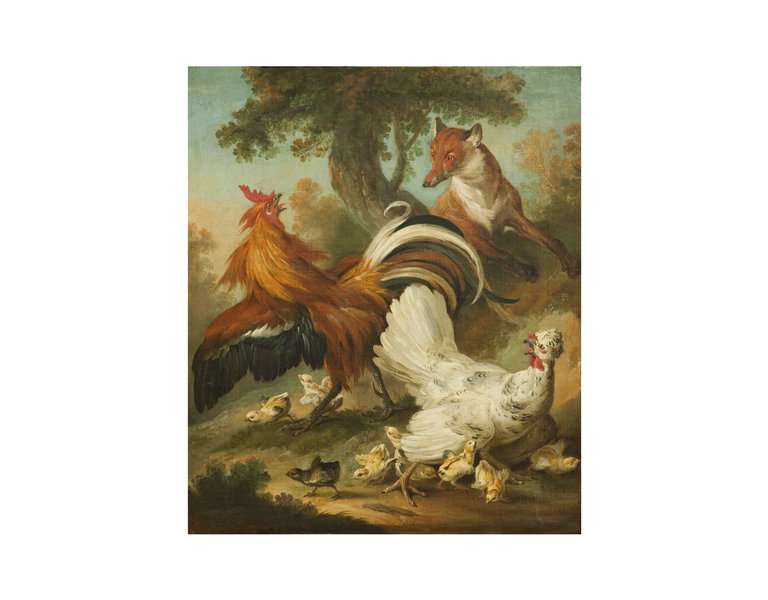