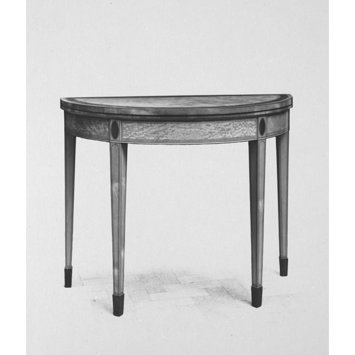 Card tables were an essential element in the furnishing of fashionable drawing rooms in the 18th century. Many evening parties involved card playing and suitable tables and other equipment such as markers, boxes for gaming counters and other small pieces, were necessary and elegant provisions. Card tables were often supplied in pairs, and were folded against the wall when not in use. The marquetry on these tables used a number of different woods and they would have been far more colourful when they were originally made as the colours of the stains and of the natural woods have faded as a result of exposure to light. The open tables were lined with green baize and these tables retain a blind-stamped border to finish the edges of the baize. This would have been made with a heated stamp, much in the way that tooling is done on fine book bindings.

Semi-circular card table, one of a pair, with double gate-leg supports, the table veneered in satinwood, with bandings of burr yew and other woods on a carcase of sofwoods and mahogany.
Design
The table is veneered in satinwood, with cross-banding of burr yew and tulipwood, with stringing of box and an ebonized wood, possibly holly. The legs, veneered in satinwood, are tapering, square-sectioned, above spade feet which are veneered in purpleheart. On their visible faces they show arched inner frames, outlined in ebonized stringing. The three slightly recessed panels of the frieze are veneered in satinwood, cross-banded in tulipwood, with black and white stringings. The fixed top is cut with a cavetto (concave, quarter-round) moulding on the lower edge, which gives the top a lighter appearance, and the use of mahogany for the carcase of teh top is presumably to allow for this. When open, the table shows a bright green baize playing surface, probably original, which is edged with a blind-stamped decorative border.
Construction
The folding top appears to be constructed with 6 narrow boards running at right angles to a straight back board and locating with two arc-shaped front boards. which serve as cleats.The fixed top appears to be of 4 boards of hardwood, set laterally. The frieze is in three sections, tenoned between the blocks at the top of the legs. The back rail is dovetailed to the back edge of the back blocks. A mid-rail runs under the centre of the table, tenoned into the front frieze section and the back rail. The gate legs are attached with wooden knuckle hinges, articulating with a fixed central section glued to the outer face of the back rail. The tops of the rail of the gate-leg sections are lined with the same baize as the top. The back edge of the tops show a recess (upper top) and a loose wooden tenon (lower top), which interlock when the table is open to ensure that the playing surface remains completely flat.
Condition
The top shows small areas of water damage. The satinwood on the top has superficial cracking, which has attracted dirt.

Satinwood, burr yew, tulipwood and purpleheart, veneered on a ground of softwood and mahogany, with stringing of holly and ebonized wood.

This table and its pair (W.71a-1917) was bequeathed to the Museum by Henry L. Florence, of Prince's Gate, SW7, as part of a collection of 31 piece of furniture (primarily English or French, but with some Asian pieces (W.55-1917 to W.85-1917). See Registered File 16/1351 on Nominal File MA/1/F792/2. There appears to be no earlier history of these tables, although they are of high quality. Henry Louis Florence (1843-1916) was an architect and members of the RIBA, serving as Vice-President from 1897 to 1899. He was a Fellow of the Geological Society and a Past Master of the Haberdashers' Company. He served in the Rifle Volunteers from 1871 to 1892 and retired with the rank of Lt. Col. As a young man he had studied in France. He began to practice in 1871, at first in partnership with Lewis Henry Isaacs (1830-1908). Florence designed many public buildings and hotels, mainly in London, and was responsible for the restoration of the Hall at Grays Inn. He was a collector who made monetary bequests to the National Gallery, the British Museum and the Victoria and Albert Museum, in addition to bequeathing many items to the latter museum. He had houses at 9 Princes Gate, South Kensington an at 16 Royal Crescent, Bath, and an office at No. 3 Verulam Buildings, Grays Inn.

This table and its pair came from the first-floor Drawing Room at 16 Royal Crescent, Bath, but no earlier history is recorded.

Semi-circular card table, one of a pair, with double gate-leg supports, the table veneered in satinwood, burr yew and other woods on a carcase of softwoods and mahogany. 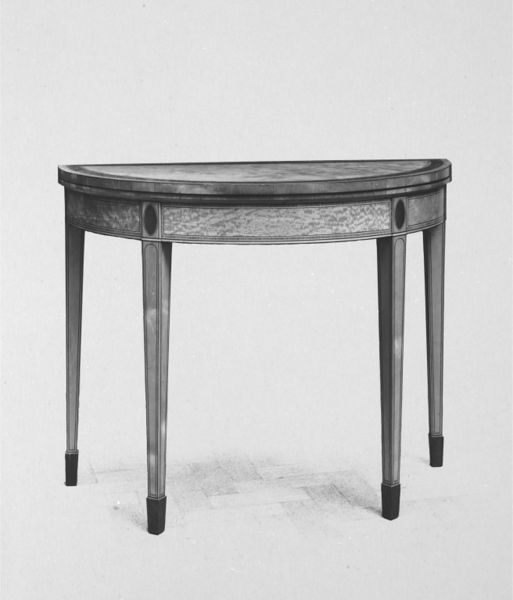