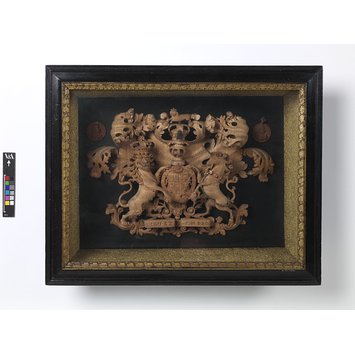 This version of the royal arms was borne by the Hanoverian kings from the accession of George I in 1715 until the union of Britain and Ireland in 1800, and combines the arms of England, Scotland, France, Saxony, Brunswick and Lunenburgh. Although the tradition of the family who donated the carving to the Museum indicated that it was made in the 1730s, the similarity of this carving to a carved coat of arms dating from around 1710 also in the V&A's collection suggests that it was more probably made between 1715 and 1720 during the reign of George I.

In the face of opposition from supporters of the Roman Catholic son of the deposed James II, this coat of arms boldly illustrated George I's lineage and his claim to the throne. The unusual inclusion of profile busts of Charles I, Charles II and Anne are heavy-handed reminders of George's Stuart ancestry, possibly applied at a later date.

The inclusion of a black-stained figure of a fly, as if just settled on the crown, was a device sometimes used by carvers to illustrate the naturalism of their carving. It may be that the fact that it has 'settled' on the crown, may also have signficance.

Framed carving showing the arms of the British crown as used from 1714-1801, carved in limewood in high relief and set against an ebonized ground. The arms are framed in a deep frame of ebonized pearwood, with a sight edge of carved and gilded foliage; within the glass, a deep slope on all sides, with gilding over sanding, creates the necessary depth for the housing of the carving.

The arms are carved in limewood, in high relief with some piercing. They are surrounded by the badge of the garter, carved with the motto of the Order of the Garter, 'HONI SOIT QUI MAL Y PENSE' , and flanked by the supporters, the crowned lion and the unicorn, each with one foot on a banderole or ribbon carved with the motto 'DIE ET MON DROIT'. The mantling, in the form of scrolling acanthus leaves, surrounds the arms, which are surmounted by an open helmet, a royal crown and the crest of a lion passant gardant. On the dexter side of the arms is a carved medallion bearing a profile head of Charles I surrounded by the words CAROLUS I DEI GRA[TIA]. On the sinister side of the arms is a similar medallion bearing the profile head of Charles II (wreathed in laurel) surrounded by the words CAROLUS II DEI GRATI[A]. In the centre at the top of the shield, a smaller medallion bears the profile head of Queen Anne surrounded by the words ANNA DEI GRATIA. On the royal crown, abovethe arms is shown a carved representation in black of a fly, as if settled on the carving - a motif occasionally used by carvers to draw attention to the naturalism of their carving. The carving is made in a number of sections. The grain of the main section of the mantling is vertical, whereas that of the arms and supporters is horizontal.

Limewood, carved, within an ebonised and gilded frame

This carving was given to the Museum in 1935 (Registered File 3711/1935, Nominal File: MA/1/P1409), after a period in which it was loaned to the Museum from 1910). According to Air Commodore D. Le Geyt Pitcher CMG CBE DSO, he had inherited it from his father, Colonel Duncan Pitcher, who had inherited it from older members of the family, who were descended from the carver William Pitcher of Woolwich (1710-1776), who is thought to have carved it in about 1730. In another note, he is said to have been 'of Deptford' and 'a pupil or contemporary of Grinling Gibbons'. The will of William Pitcher is said to have been registered and proved by his executor and son, Thomas Pitcher on 6 May 1776 at Somerset House (242 Bellas) as the will of 'William Pitcher of Woolwich, carver'. The authority for is birth date is a short pedigree in the writing of Col. Duncan Pitcher, who notes that he was the son of Thomas Pitcher, who died in 1718. The Pitchers were originally a family from Cambridgeshire. William is noted as having two children, a son Thomas, born at Woolwich in 1745, died 1839; and a daughter Elizabeth, born 1743 (death date not recorded). It is not recorded which of the two children was the ancestor of the donor. The date of the carving was apparently suggested by the date of a drawing of a fly, in the possession of Colonel Duncan Pitcher, which was shown to officers of the Museum in 1912 (Minute 28 November 1912, in M. 6150/12). At the time of the presentation of this carving, the donor also gave another carving (W.36-1935), in pearwood, of a a small, two-handled vase containing a large bunch of flowers.

The carving is said to have belonged to members of the same family since it was made.

In 1991 the glass, which was damaged, was replaced, in the Conservation Studio of the Museum.

A high relief carving of the British Royal arms, as used between 1715 and 1801, in pearwood, mounted on an ebonized base, and set within an ebonized frame with gilded sight moulding and a gilded framing to the interior. The light-toned carving is set with a black-stained fly, as if it has alighted on the crown.

According to family tradition, the coat of arms was carved by William Pitcher, an ancestor of the donor. There is scant evidence to support this and what little is known about Pitcher was supplied by the donor from a family history. 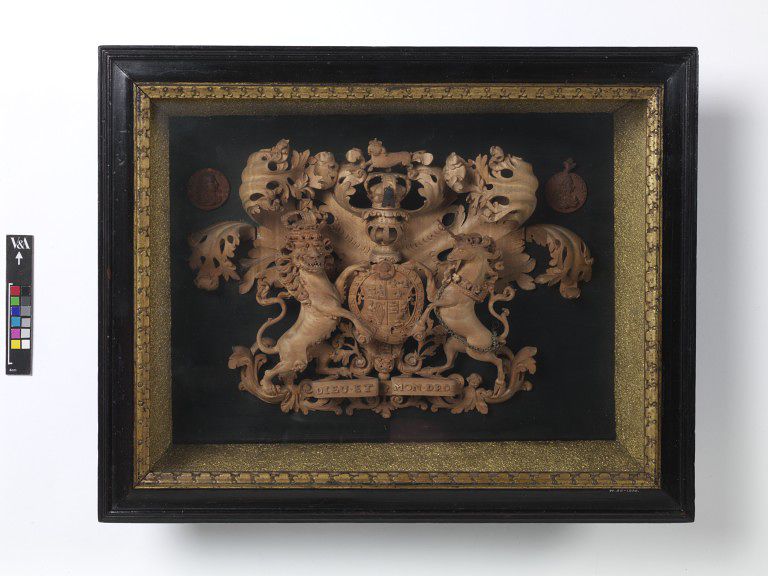