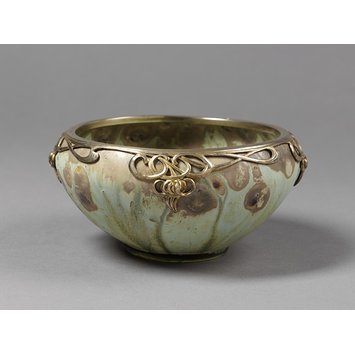 Bowl of grey stoneware with a silver-gilt mount. Covered with a dull mottled green and brown glaze. The chased and perforated mount round the incurved mouth consists of interlaced leafy stems with flowers.

A small indecipherable mark in the silver
On the rim

This bowl was bought from Samuel (Siegfried) Bing's shop, L'Art Nouveau, 22 rue de Provence, Paris. Alexandre Bigot (1862-1917), a professor of physics and chemistry, became interested in Far Eastern stoneware and porcelain at the Universal exhibition, Paris, in 1889, and began to experiment at his birthplace, Mer, in the Loir-et-Cher district. At the Universal Exhibition in Paris in 1900, he showed a frieze of animals after designs by the Sculptor Paul Jouve. At his workshop at 13 Rue des Petits Ecuries, he specialised in architectural ceramics to his own designs and to designs by Henri Van de Velde, Hector Guimard and Louis Majorelle, among others. The silver mount is by Eugène Edward Colonna (1862-1948. Colonna trained as an architect, worked in America for Tiffany and then settled in Paris where he worked for Samuel (Siegfried) Bing.

Alexandre Bigot (1862-1927), a physics and chemistry professor became interested in stoneware and porcelain from China and Japan which was shown at the Exposition Universelle, Paris, 1889. He was especially interested in Chinese porcelain but worked in the less expensive medium of stoneware first exhibiting in 1894. He received a grand prize in Paris, 1900 and established a studio in Paris, making architectural ceramics with such designers as Henry Van de Velde, Henri Guimard and Louis Majorelle. His stoneware was sold through Samuel (Siegfried) Bing's shop L'Art Nouveau and a number were silver-mounted to designs by E.E.Colonna. The business closed in 1914.

Bowl of grey stoneware with a silver-gilt mount, made by Alexandre Bigot, mounted by E.E Colonna, Paris, 1895 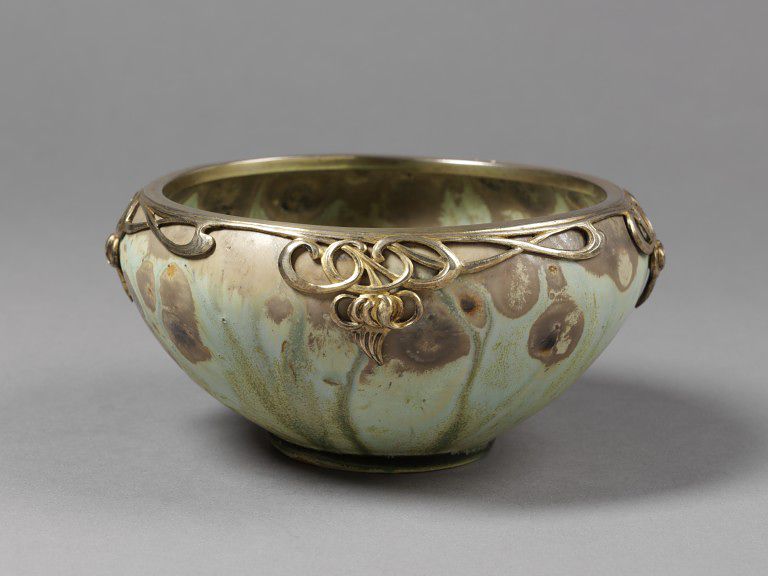