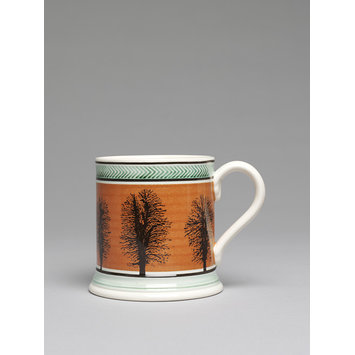 This mug, made in Stoke-on-Trent in 1994, has been slip-cast, assembled, painted and rouletted by hand in the traditional manner used by the orginal Leeds Pottery when making Mochaware at the start of the nineteenth-century. However the central area with tree decoration is achieved by means of an applied printed underglaze decal, presumably in order to keep production costs at a viable level. The orginal method would have been to feather a wet alkaline coloured clay slip by means of a drop of acidic liquid. Mochaware is named after mocha stone, a chalcedony thought to have been first found in Mocha, Yemen. When split it reveals markings suggestive of tree branches or moss.

Founded in 1770, Leeds Pottery quickly gained a reputation for elegant cream-coloured earthenware in the neo-classical style. During the nineteenth century, the pottery's export markets shrank considerably when factories in Europe and Russia copied its wares. Changing tableware fashions were another factor in the pottery's closure in 1881. Leeds Pottery was re-started in new premises in 1888 by a former employee of the original factory and this time it lasted until 1957. The enterprise recommenced in 1983 when Leeds City Council set up a workshop for reproductions copying pieces from museum collection. This was subsequently sold to the private sector and production moved to Stoke-on-Trent. There a re-incarnated Hartley Greens & Co. produced creamware from the orginal moulds and pattern book designs from 1992. The company became a subsidiary of Denby Holdings Ltd. in 2011 and while some processes are now fully modernised, many aspects of production are carried out skillfully by hand in the same manner that the orginal wares were made and decorated.

Mug, cream-coloured earthenware, footed, with Mochaware style decoration resembling trees; the underglaze decoration consists of a band of rouletted chevrons painted over in green between two thin black bands below the mouth rim, a painted band of green above the footrim and in the central area an applied printed section of decoration giving the appearance of black trees over a broad orange band; the applied loop handle has stylised foliate terminals.

Made in 1994 after a traditional Leeds Pottery Mochaware design of the early nineteenth century.

Leeds Pottery was founded in 1770 by business partners Richard Humble, Joshua and John Green, the latter a master potter, Henry Ackroyd and John Barwick. The factory at Jack Lane, Hunslet, Leeds, quickly gained a reputation for its fine neo-classical style creamware. William Hartley joined the partnership in 1776. For many years, the business thrived despite competition from Wedgwood, and exported to Europe and Russia. During the 19th century, though, it became a victim of its own success in that its designs were then copied by Continental creamware factories, causing its markets to shrink. With changing fashions in tableware, the factory closed in 1881 and was subsequently demolished.

James Wraith, who had worked for the pottery in his youth, re-started the Leeds Pottery in 1888, using the old designs. This second incarnation of the factory closed in 1957. In 1983, Leeds City Council founded a workshop for the disabled where reproductions from museum collections were made. When funding faltered, the Council sold the workshop to the private sector and production moved to Stoke-on-Trent. From 1992, the businessman John Croft ran the company as Hartley Greens & Co., using original moulds and patterns. Following liquidation, the company became a subsidiary of Denby Holdings Limited in 2011. It continues to produce creamware to traditional Leeds Pottery patterns. While some techniques and processes are modernised, many aspects of production are still carried out skillfully by hand. 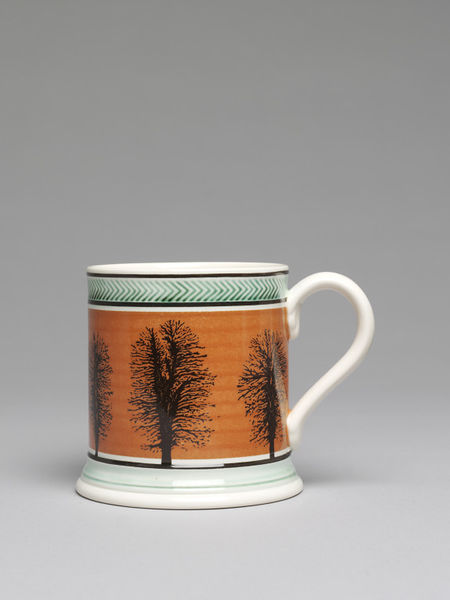