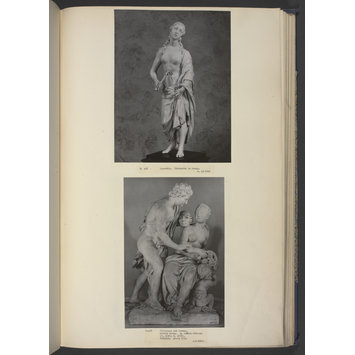 Vertumnus was a nature god who could assume any shape, and is here shown wooing the nymph Pomona. He gained her presence by disguising himself as an old woman, and proceeded to plea his cause. When this failed, he revealed his true identity as a youthful god; he is shown here having just removed his mask.

Vertumnus and Pomona was almost certainly originally made for Canons in Middlesex, the seat of the Duke of Chandos, as a companion to a similar group by Scheemakers. After Canons was demolished the group went to Stowe in Buckinghamshire, where it functioned as a garden sculpture until it was sold in 1921. The two groups were clearly viewed as a pair. In 1797 and 1799 they were noted as being in the garden. By 1848, when the first Stowe sale took place, they were in the South Portico. Because the sculpture stood outside for many years, the surface of the marble is badly weathered.
Delvaux came from the Netherlands, but worked in England from 1717 to 1728, mainly as a partner of Peter Scheemakers (1691-1781).

Statue group in marble representing Vertumnus and Pomona. Pomona is seated on an ivy-clad tree-stump. She leans slightly to the left, and supports herself with her left hand. Drapery lies across her lap. Her right hand, in which she holds a sickle, passes in front of her body and rests on a basket of fruits and flowers. Cupid sits on the ground to her left. He holds a bow in his right hand and sucks the forefinger of his left. A quiver of arrow lies on the ground; its ribbon and buckle fall over the edge of the base.

Formerly at Canons, near Edgware, Middlesex, the seat of James Brydges, Duke of Chandos (1673-1744). Whinney suggested that the present piece together with the Venus and Adonis group executed by Peter Scheemakers, was almost certainly commissioned by the Duke of Chandos specifically for Canons: Scheemakers and Delvaux were at this point working in partnership. However in 1747, the drain of hereditary tax on an already spent fortune resulted in the demolition of Canons, and the sale of its contents. The two groups were probably bought by Lord Cobham for Stow House, Buckinghamshire at the Canons sale. They are first recorded at Stowe in 1773. Both were also recorded to have been in the Dining Room, but later removed to the garden. The two groups were clearly viewed as a pair, displayed together whilst at Stowe House, and appearing as consecutive lots in the sales. The present group was offered as lot 782 on 21 August 1848, when it was described as being in the South Portico, noted in Forster's catalogue as sold to 'A. Robertson, Esq.' for 86 2s 0d (82 guineas). In the 1921 Stowe sale held by Messrs Jackson Stops, it was again in the South Portico, along with Scheemaker's 'Venus and Adonis'. In the third and last Stowe sale catalogue of 1922 the present group is listed, though the 'Venus and Adonis' is not. However, the accompanying illustration in the catalogue is of the Venus and Adonis, suggesting that the present piece had already been sold at the 1921 sale, and its inclusion in the catalogue an error. The location of Vertumnus and Pomona is not recorded from 1921 until 1948, when it was acquired by Dr W.L. Hildburgh F.S.A. from Bert Crowther, Isleworth, Middlesex, towards the end of 1948. It was given by Dr Hildburgh to the Museum as customary New Year gift in 1949. 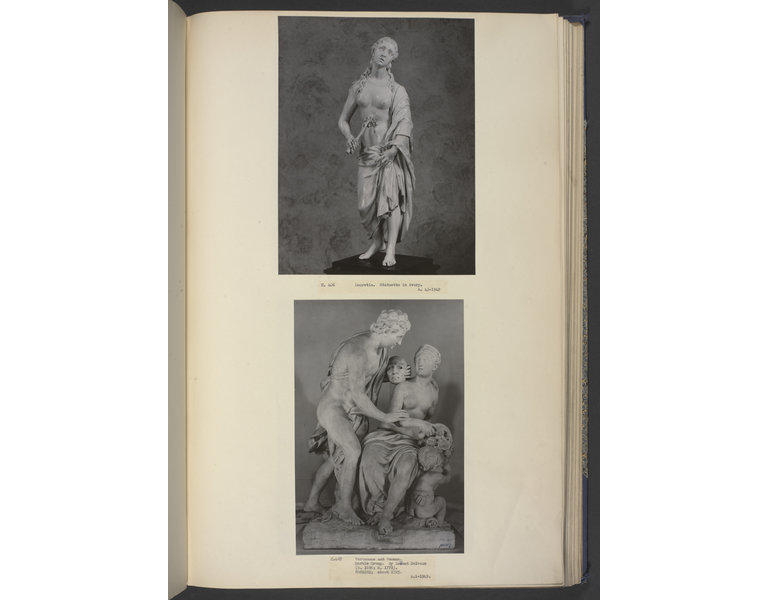