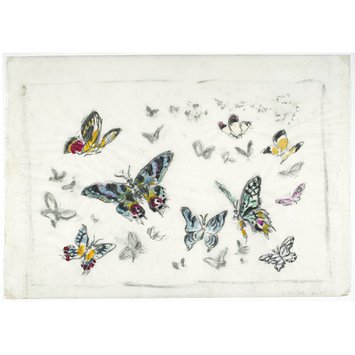 Ring Round the Moon, a translation of Jean Anouilh's play L'Invitation au Château by Christopher Fry, was first performed at the Globe Theatre (now the Gielgud Theatre), in 1950. It enjoyed a substantial run in the West End before moving to New York. Peter Brook, the director, suggested that the setting should be a winter garden or hothouse with plants and trees. Although untypical of Messel’s style, the set is one of his most memorable designs, and complemented the elegance and fantasy of Fry’s poetic drama.

A charcoal and watercolour sketch of butterflies by Oliver Messel for Ring Round the Moon, Globe Theatre, 1950. Tracing paper attached with sellotape to a sheet of acetate.

Charcoal, gouache and watercolour on tracing paper and acetate

Ring Round the Moon, a translation of Jean Anouilh's play L’Invitation au Château (1947) by Christopher Fry, was first performed at the Globe Theatre, London (now the Gielgud Theatre), on 26 January 1950. The production, presented by H. M. Tennent Productions Ltd, was directed by Peter Brook, with a cast that included Paul Scofield, Claire Bloom and Margaret Rutherford.

Lord Snowdon, Oliver Messel's nephew, inherited Messel's theatre designs and other designs and artefacts. The designs were briefly stored in a disused chapel in Kensington Palace before being housed at the V&A from 1981 on indefinite loan. The V&A Theatre Museum purchased the Oliver Messel collection from Lord Snowdon in 2005.

Historical significance: The set for Ring Round the Moon is one of Messel's most famed set designs. 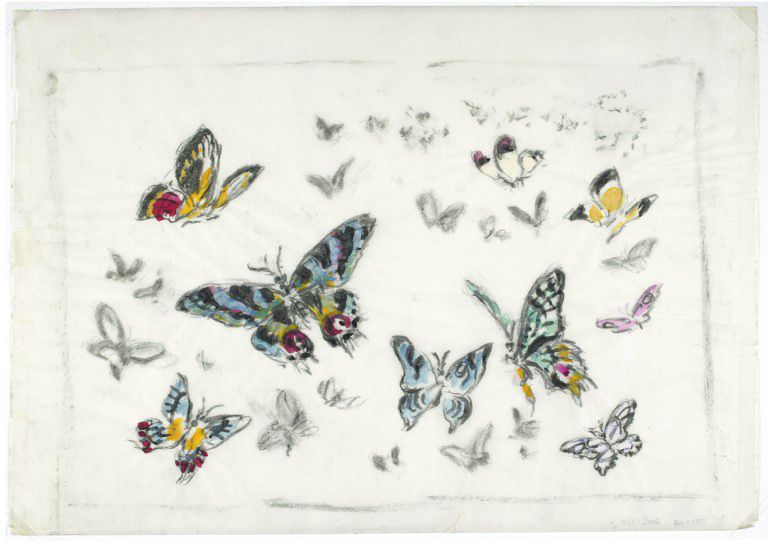