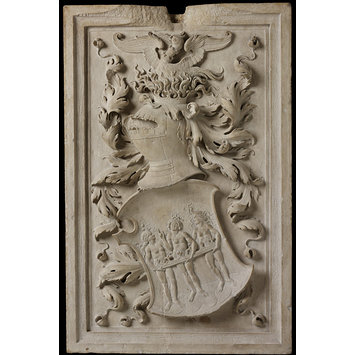 This coat-of-arms comes from the Palazzo Alidosio at Cesesna in Italy (demolished between 1838 and 1846).
The Alidosio family was powerful and extensive and can be traced back to the 10th century. Construction of the Palazzo Alidosio was begun in 1508 by Obizzo Alidosio a favourite of Pope Julius II. The Pope appointed him Papal Governor of Cesena and granted permission for the palace. The three naked women depicted on the shield are the Three Graces, the emblem of Obizzo. Heraldry from this period did not shrink from representing naked human figures, but often found ingenious ways of preserving their decency. Here the coronet which maintains the dignity of the women also signifies Obizzo’s status as Lord of Castelo del Rio.

Rectangular escutcheon in Istrian stone. Recessed witin a moulded border, the relief bears a shield showing three naked women with wind blown tresses, encircled by a coronet. The shield is surmounted by a helmet and a crest (out of a coronet a phoenix amid flames, collared with two coronets).The background is carved with oak leaves.

Historical significance: Ottfried Neubecker uses the present impressa as an example of the human body in heraldry; noting that such works did not shrink from representing the naked human form but often found ingenious ways of preserving their decency. Here he refers to the coronet in which the Three Graces stand, which also signifies Obizzo's lordship.

The origin of the Three Graces is uncertain, but there is a mention in Homer; Hesiod is the first who says that they are three in number - Euphrosyne, Thalia and Aglaia - and the daughters of Zeus and Eurynome. In early times they were adored as nature divinities associated with life and fertility and in keeping with their symbolism, they are often grouped harmoniously. Pausanias tells us that they belonged to Aphrodite, goddess of Spring and beauty. Their cult was practised throughout Greece and the oldest and most famous of their sanctuaries was at Orchomenos in Boeotia where they were represented by stones.

Physically and intellectually they represent charm, grace and beauty, but philosophically they have a moral significance. It would seem that since Aristotle there was a play on the double meaning of the word "charis" which signifies not only "grace" but the "service that one renders or receives". The Stoics considered that the attitude of the Three Graces symbolized the ties between the one who renders service and the one who received it.

The Alidosio is an ancient surname in Emillia, dating from the 10th century in the annals of Imola. They originated from the Onesti family and the Counts of Cunio and became a powerful family with extensive branches. Their genealogy begins properly in the 13th century, with two main branches of the family: those invested as the bishops of Imola between 1335 and 1424 and those who became the Lords of Castelo del Rio.
The family's first recorded connection with Cesena is the marriage of Riccarda Alidosio to Andrea Malatesta signore di Cesena e Fossombrone.
Obizzo Alidosio (d.1509) was a Lord of Castelo del Rio. A doctor of law he became a favourite of Pope Julius II. He was sent as an envoy of peace to Forli in 1505 and on 9th of April 1508 he was made Papal Governor of Cesena by Julius. On 31st July 1508 Obizzo received a from the town of Cesena a grant of land on which to erect a palace. Bazzochi and Galbucci state that the architect of the palace was Sapiano Merlino. Obizzo Alidosio died in Cesena on 8th September, 1509 where upon the palazzo passed with the rest of his property to his son Cesare, who bequeathed it to a cousin Ciro. The palace was later converted into a theatre known as the Teatro Spada., and was demolished and replaced between 1838 and 1846. The family was extinct by 1645 according to Litta, who recorded the Alidosio in his Famiglie Celebri Italiane in 1852.

Pope-Hennesy believed the shield had been wrongly regarded by J.A.Goodall as a "tournament or pageant device" and that the work represented a true coat-of-arms. He could not however identify to whose arms the three naked women pertained. They are stated in Grove to be The Three Graces an impressa rather a coat of arms, belonging to Obizzo. Robinson considered that this impressa, the Alidosio coat of arms 7675-1861 and parts of a doorway 7367, 7368, 7673-1861 all came from the same edifice.

Coat of arms, Istrian stone, from the Palazzo Alidosio in Cesena, Italy, 1508-09

The shield is charged with an unidentified coat-of-arms showing three naked women encircled by a coronet, and is surmounted by a helmet and crest 9out of a coronet a phoenix amid flames, collared with two coronets). It was acquired in Cesena, near Rimini, with four other sculptures, one of which shows the arms of Alidosio of Imola (an eagle). The carving therefore probably comes from the Palazzo Alidosio (now demolished) the construction of which was begun by Obizzo Alidosio (d.1509), Papal governor of cesena from 1508. [1994]
COAT OF ARMS
1508-9

This heraldic device comes from the Palazzo Alidosio at Cesena in north-east Italy. The three naked women depicted on the shield are the Three Graces, the emblem of Obizzo Alidosi for whom the palace was constructed. They hold a coronet that signified Obizzo's status as Lord of Castello del Rio. 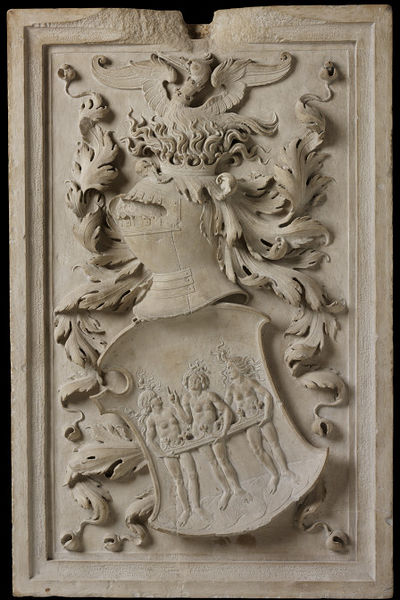