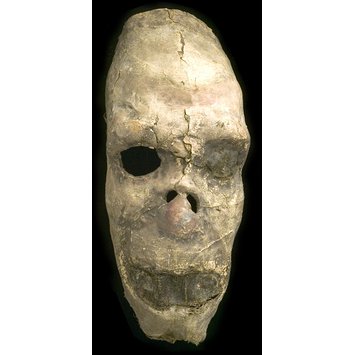 Messel’s career as a theatre designer began with a prestigious commission to make ‘masks and symbols’ for a Diaghilev Ballet production, Zéphyre et Flore, in 1925. The masks were exhibited at the Claridge Gallery and attracted the interest of C. B. Cochran (1872-1951), the theatre impressario. He commissioned Messel to make masks for his revues from 1926 onward, and subsequently asked him to design costumes and sets. Messel also designed masks for private commissions and as interior decoration.

Messel probably made this mask for one of C.B. Cochran's Revues in the 1920s. He inventively combines gauze and papier mâché to create a disturbing head with rotting flesh and exposed bone.

A decomposing or skeleton mask by Oliver Messel. The mask is skull-like and made from papier maché and gauze. One eye is shut, the other covered in gauze. The mouth is open and filled with gauze. The nose is disintegrating.

In 1922, after an education at Eton, Messel studied to be a painter at the Slade School of Fine Art under Henry Tonks; Rex Whistler was a fellow student. Messel’s formal studies concentrated on life drawing and painting, but Messel, along with Whistler, made masks from papier maché and wax for student events. An exhibition of Messel’s masks at the Claridge Galleries in London in 1925 led to Messel’s first theatre design commission to design masks for the prestigious Diaghilev ballet production of Zéphyre et Flore, directed by George Braque and performed at the London Coliseum in 1925. Messel also made masks for other purposes including for friends to wear to dances, as lamp shades and for wall decoration.
Charles B. Cochran engaged Messel to design costumes, masks and sets for his annual revues at the London Pavilion from 1926 onwards; these revues, consisting of songs, sketches and chorus numbers, provided Messel with ample opportunities to develop and exercise his talent for minute attention to detail, inventive use of materials, including the use of rubber, dish cloths and fabrics painted to suggest embroidery, and imaginative borrowings from historical periods and styles. Messel’s reputation grew slowly; most notably, critics praised Messel’s disturbing masks for ‘Dance, Dance, Little Lady’, a song by Nöel Coward from the 1928 Cochran revue entitled This Year of Grace; the scene was described by James Laver as “a modern Dance of Death.” (Laver, 1933).
Lord Snowdon, Oliver Messel's nephew, inherited Messel's theatre designs and other designs and artefacts. The designs were briefly stored in a disused chapel in Kensington Palace before being housed at the V&A from 1981 on indefinite loan. The V&A Theatre Museum purchased the Oliver Messel collection from Lord Snowdon in 2005.

Decomposing or skeleton mask by Oliver Messel possibly for one of C.B. Cochran's revues 1920s.

The mask is most likely to date before 1930.