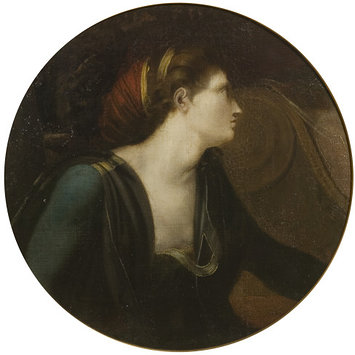 Head of a woman from the Dream of Queen Katherine

Henry Fuseli [Johann Heinrich Füssli ] (1741-1825), was born in Zurich and received rigorous art-historical training from his father Johann Caspar Füssli. He spent most of his life in London becoming an associate of the Royal Academy in 1788 and a Royal Academician in 1790. He specialised in history paintings on a grand scale, drawing his inspiration from the mythology, classical literature and notably Dante's Divine Comedy. He was also a prolific writer and was elected the Academy's Professor of Painting in a post he held until 1805; he was made Keeper in 1804 and re-elected Professor in 1810, and the statutes were changed to enable him to retain the Keepership as well.

This painting is possibly a preliminary study or a fragment of a destroyed composition commissioned by Thomas Macklin in 1779 for his Poets’ Gallery. The subject matter is taken from Shakespeare’s Henry VIII (Act 4, scene 2). The head could possibly correspond to one of the numerous females’ profile although it has not been possible to individuate which one it precisely refers to.

Head of a women in profile towards right, her hair are hold by a golden ribbon and she wears a green dress.

Rev. Chauncey Hare Townshend, listed in the 1868 post-mortem register of the contents of his London house (V&A R/F MA/1/T1181) in the Library as 'An Oil on canvas, backed with millboard. Head of a female (perhaps a portion of the picture representing the Dream of Queen Catherine - see Nos. 1386, 1387). By Henry Fuseli, RA. In frame. English. 18th century'; bequeathed by Rev. Chauncey Hare Townshend, 1868.

Historical significance: This painting is possibly a fragment of a picture representing the dream of Queen Katherine (Shakespeare, Henry VIII, Act Iv, scene 2) commissioned in 1779 by Thomas Macklin (c. 1760-1800) for his Poets' Gallery. The final composition is only known through an engraving made by Francesco Bartolozzi (1728-1815) in 1788, which was much criticised by Fuseli. Between 1779 and 1788, Fuseli executed a series of works and studies for this composition: a version was commissioned by Sir Robert Smith, Bart (1744-1802) and exhibited in 1781 at the Royal Academy, and another destroyed but known through two fragments in the V&A (see 1386-1869 and 1387-1869).
A preparatory study for the latter version can be seen on the reverse of a drawing showing 'Bacchus as a child' in the Kunsthaus, Zurich.
In 1788, Macklin issued a prospectus for 'One hundred pictures / Prints illustrative of the most celebrated British Poets ... with letter-press explanatory of the subject, extracted from the writings of the respective poets.' A copy is held at the National Library of Wales. 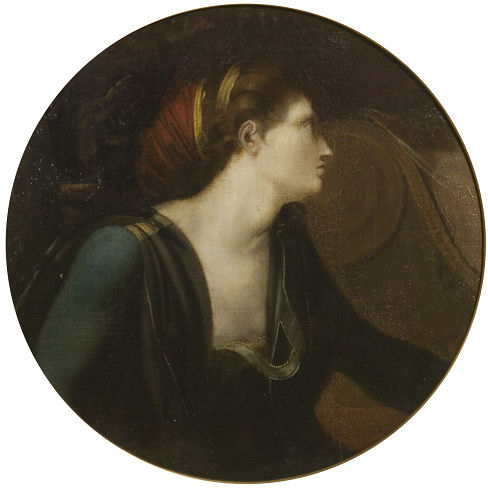